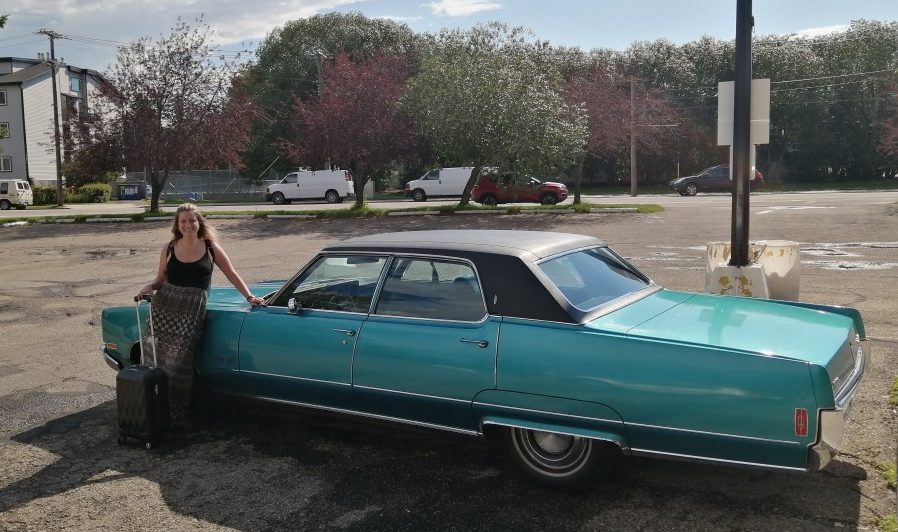 21 July 2020.
Last night there was talk between Not Larry and Not Larry’s Sister that we would be on the road by 08:00, so I got up at 06:30 this morning to start getting ready. A phone call took place between the sisters at about 07:00 and there was a discussion of us leaving town by 07:30. I was ready. But, it was 08:30 before we were in the car. I am not sure what I was doing by thinking it would be any other way.

Julie was tuckered out and I was pooped when we hit the road and headed south of Fort McMurray, Alberta, Canada, North America, Earth, Milky Way, ∞. I fell asleep in the back of Not Larry’s Sister’s SUV, and Not Larry fell asleep in the front. I felt guilty about Not Larry’s Sister doing us a favor by driving us to Calgary while we both slept, but she was a great sport about it all. After about an hour we both recovered and provided company for better or for worse.

I spent about three straight hours on the phone with the following: Jim the car owner, Jim’s mechanic, auto-part warehouses, my bank, AMA, the garbage man, the provincial premier, Angela Merkel, a NAFTA agent, NATO sponsors, an Australian governor, a pretzel maker, the SEO of Crane Toilet Manufacturing, Jim Morrison, Jimi Hendrix, a British Zoologist and Garth from Wayne’s World… It seemed that if there was ever a phone number created at any point in time, I had to dial it today. And since Covid-19 became a hassle, it is difficult to deal with anyone over the phone as they all have an excuse as to why they would rather not be of much help.

Not Larry had it no better as she was working her phone as well to get ready to buy a car. It is incredible how difficult of a process that is in Alberta with all of the red tape and insurance calls legally necessitated. The entire procedure should be made easier to bring the vehicle home for all of the paperwork to be completed. Instead, it is a bureaucratic chain of phone calls and frustration.

After 7 hours of driving and one high-spirited encounter with a little person bearing an inferiority complex while working in an auto-insurance registry, we arrived in Calgary stuffed full of cheese and samosas. Following Jim’s address via GPS, we arrived in his hood. Of course, we had never met Jim before, but he was starting to feel like an old friend after the phone calls Not Larry and I have had with him.

When we pulled onto the street showing his address, there she was…an Aegean–aqua colored 1970 Oldsmobile 98 with a 455 Rocket engine…Not Larry’s newest fantasy that does not involve me, shirtless, with a beer in my hand.

On initial appearance, the car was more beautiful than she had been in the photos and that is a rare situation when car-shopping on the internet. Not Larry had been perusing Kijiji for a couple of weeks and eventually we found ourselves standing and looking at the end result of all of those searches. I have Heather the iridescent Corvette, a super cool summer drive, while Not Larry has been growing weary of soccer-mom car driving and wanted a rad ride as well. I like to rip doughnuts with the T-Tops out, and Not Larry likes to cruise for long stretches on a yacht. Enter one mint-condition Aegean-aqua 1970 Oldsmobile 98 with a 455 Rocket.

The 50-year-old car had just 53,001 miles on it which equates to just over 1,000 miles per year. The original paint sparkled, the maintenance was obvious, and the interior was so flawless that the car seemed to have arrived in a time-machine from the March 1970 dealership show-floor.

Jim, 73, told us the car has never even seen rain.

Four years ago he had bought her from an 84-year-old German man. That original owner had custom-ordered the car brand new in Aegean-aqua, with requests of no A/C, electric seats, or power windows to avoid future problems. German simplification efficiency… The interior of the car is a forest green that pops out at your eyes the moment you open one of the doors. Essentially, she is a brand-new 50-year-old car. She is flawless, all 213inches/17.75feet/5.41 meters of her. 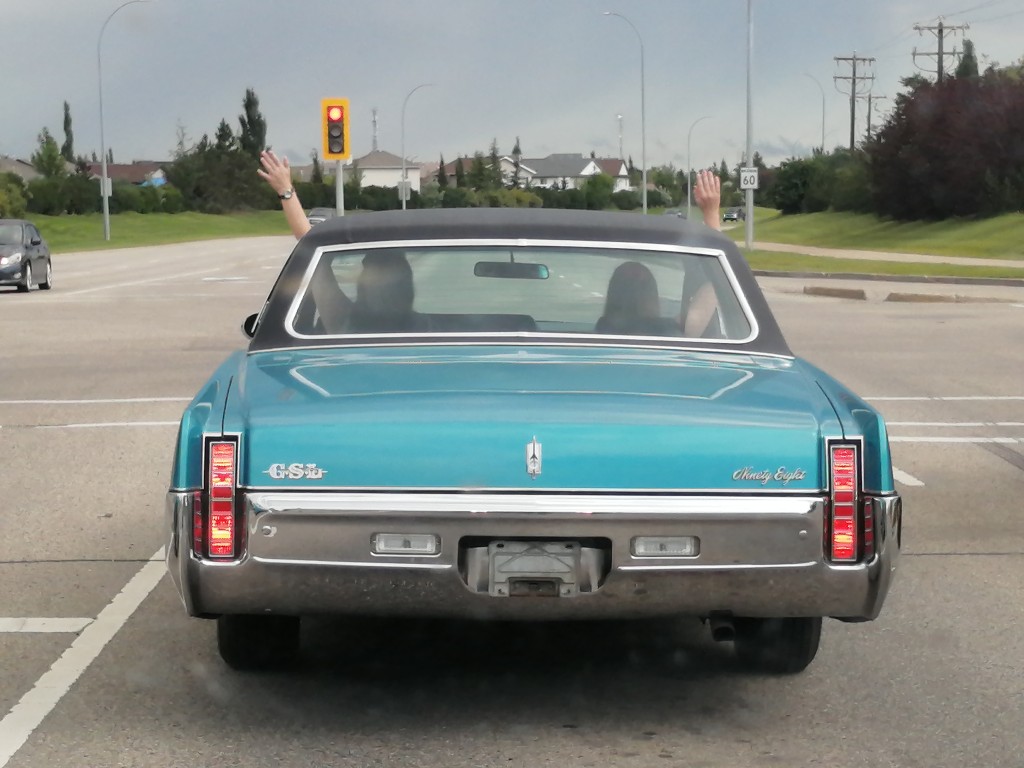 Not Larry and Not Larry’s Sister. Blondes in Aegean-aqua.

The German man that Jim bought the car from had failing health and 14 days after Jim bought the 1970 Oldsmobile 98, the German man died. Jim himself has decided to start downsizing keepsakes. On the contrary, Not Larry is upsizing collectibles so there we were. Neither she nor I could believe the condition of the car. Just the click of turning the ignition key in the tumbler on the steering-column felt like it was starting a brand new car. There are not even scratches on the steering column from the door-key dangling on the ring below the ignition key. The signal-lever crisply clicks into place like it has never been used. There is not even a crack in the steering wheel. It is difficult to tell if the car had even had passengers in the back seat before. Ash-trays abound in all door handles and there are cigarette lighters in the back seat for all passengers, to which I asked Jim, “How did they know in 1970 that we were all going to have cell phones?” Jim did not really think I was funny, but at least my girlfriend enjoyed the humor…

Not Larry and I inspected the whole 1970 Oldsmobile 98, just marveling at it.

When we started that 455 cubic inch motor, one of the biggest V8 engines to come off the GM production line, she purred so quietly that we could barely hear her running. Not Larry drove her first and then I got behind the wheel, babying her around Calgary and enjoying the ‘thumbs-up’ from other cars we met. She drove like a dream-boat (see what I did there?). After a 20-minute test-drive we parked her back in front of Jim’s house. Not Larry decided that she needed her, so we struck up a deal with Jim, shook hands, and followed him into his house to sign some papers. Jim had a large brown envelope with a three-colored swatch including Aegean-aqua that the German man had decided on when ordering her. Also in the envelope was every receipt for all work done to that car since 1970, including the original bill of sale for which listed her price at “$5,336.00” and a warranty which ran out 45 years or 3001 miles ago. Perhaps Jim was worried about un-warrantied repairs and that was why he was willing to sell her… 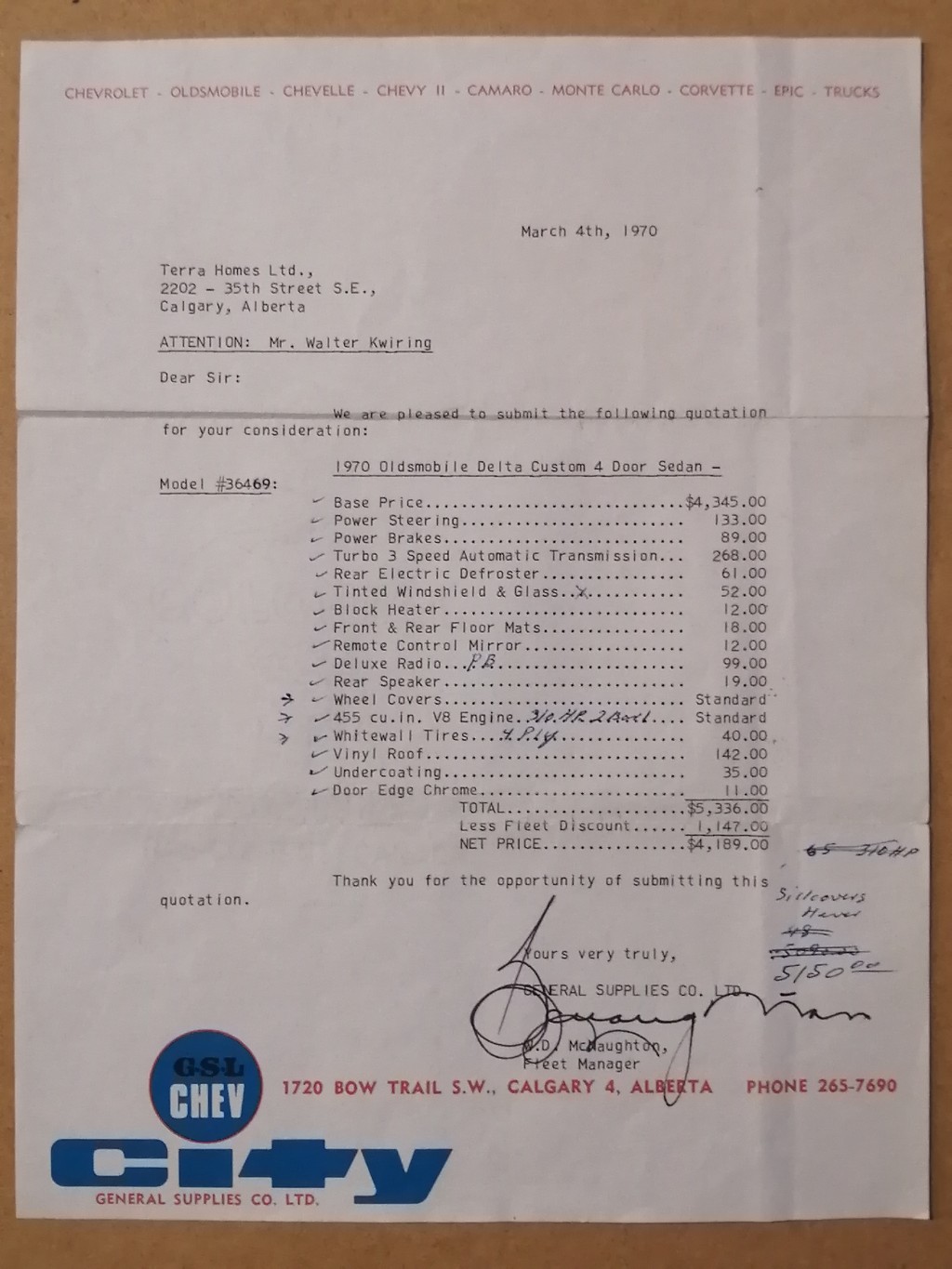 From a small white envelope, Not Larry handed Jim a stack of cash. He was a little paranoid of it all and counted the money at least three times before he took out a flash-light to inspect every single $100 bill to be sure that none of them were counterfeit. It was a very tedious ordeal. Canadian money is some of the most difficult money in the world to re-create. I told him, “Jim if I knew how to make bills that well we’d be buying more than just a classic car…” Jim was most likely just enjoying the moment of having visitors, inclusive of one very pretty Not Larry. 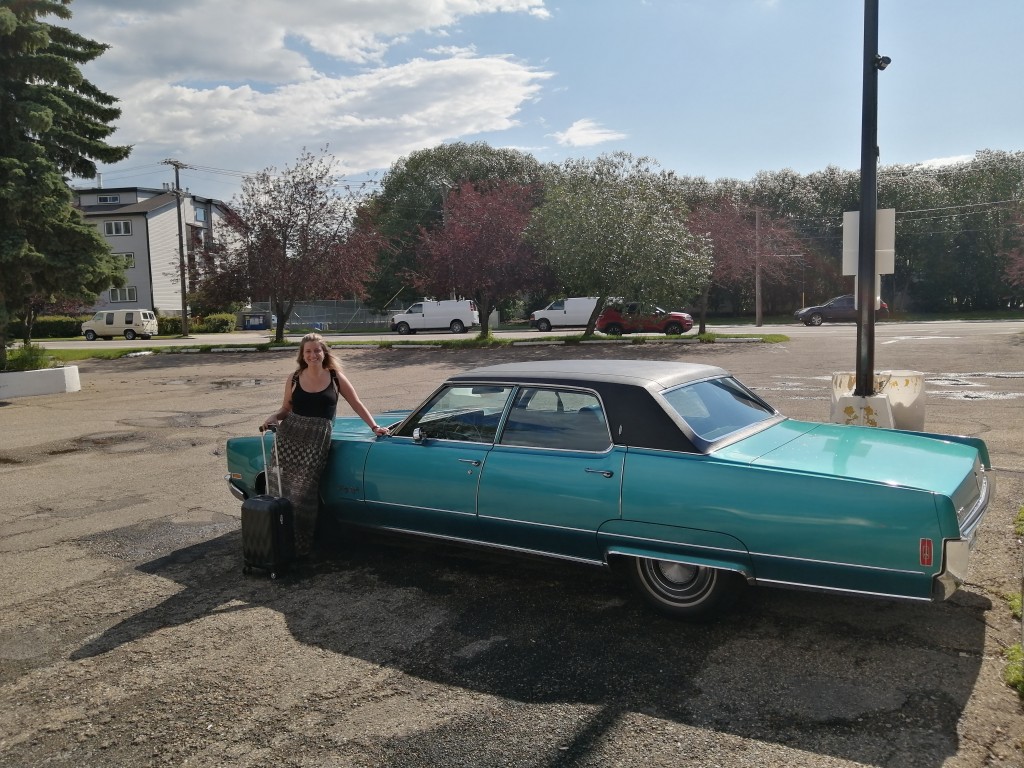 When everything was taken care of, Not Larry drove her new beauty away from Jim’s and pointed the 1970 Oldsmobile 98 north. The old/new automobile is terrifically gorgeous and wonderfully large. When the hood of her got to Airdrie, about 30 minutes north of Calgary, the trunk of her was still somewhere in the Calgary suburbs. I was teasing Not Larry about how greedy she is and that she needs to drive two cars worth of car at once. She asked me, “Are we too young to have a classic car collection?” I replied that I hoped not. She told me, “It is not fun like your car, but it is cool!” I think she is wrong. With a back seat similar to a queen-sized bed it could potentially be even more fun than a two-seater Corvette! 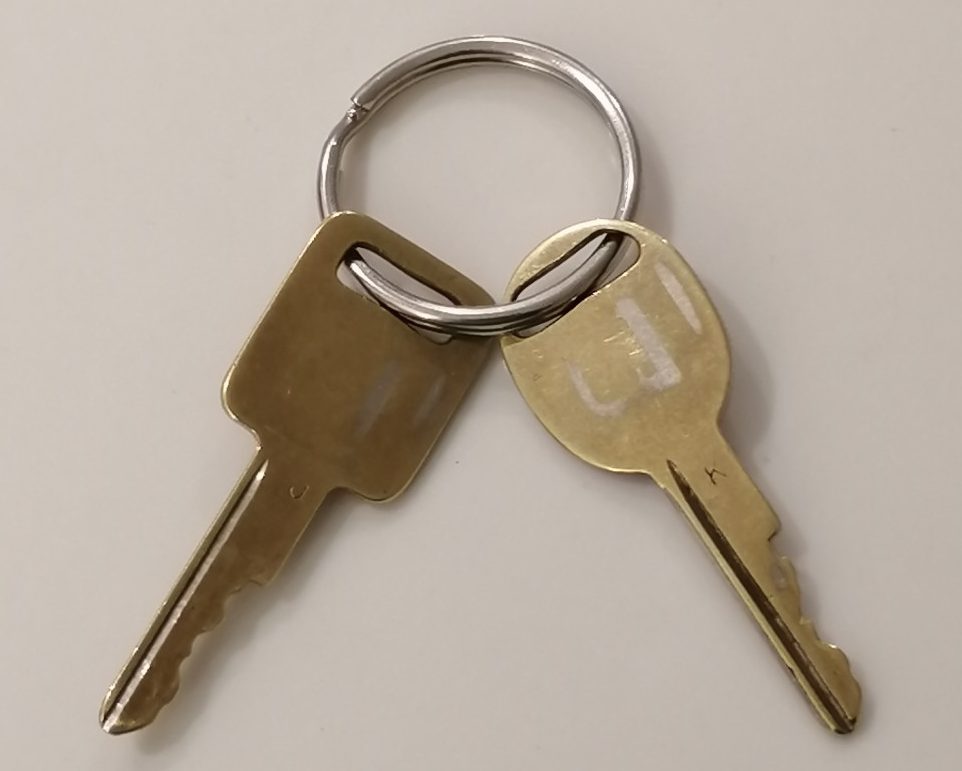 The only thing with wear on it is both sets of keys. The German man must have had a bit of a finger twitch as he rubbed all of the writing and the GM lettering right off. 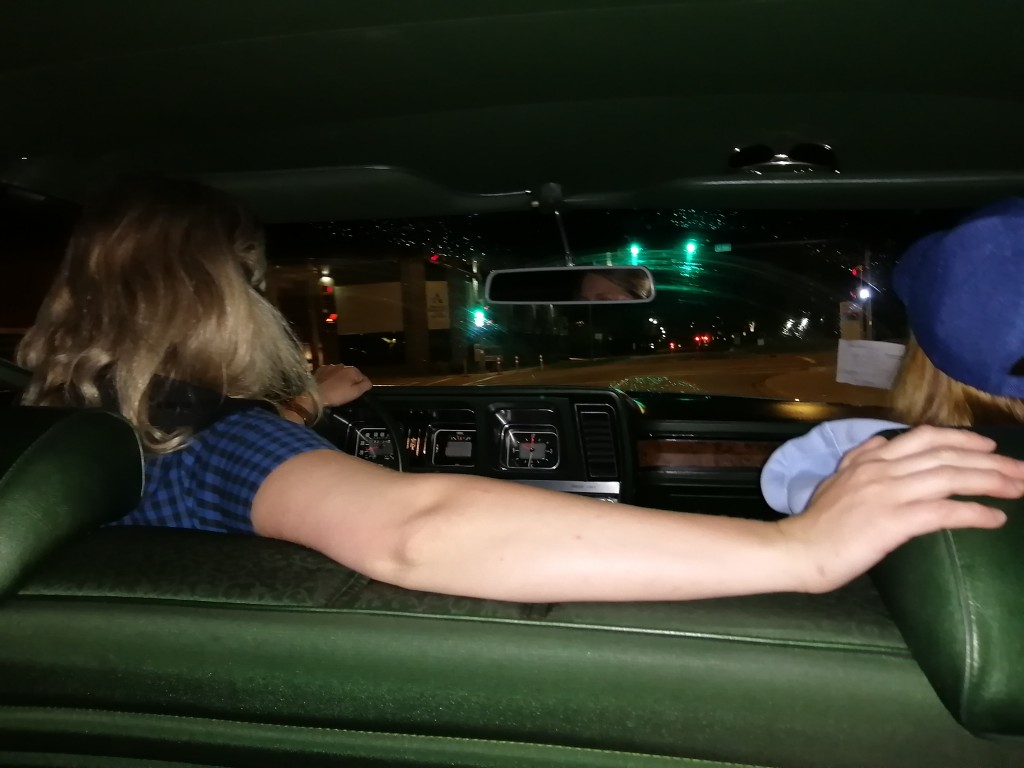 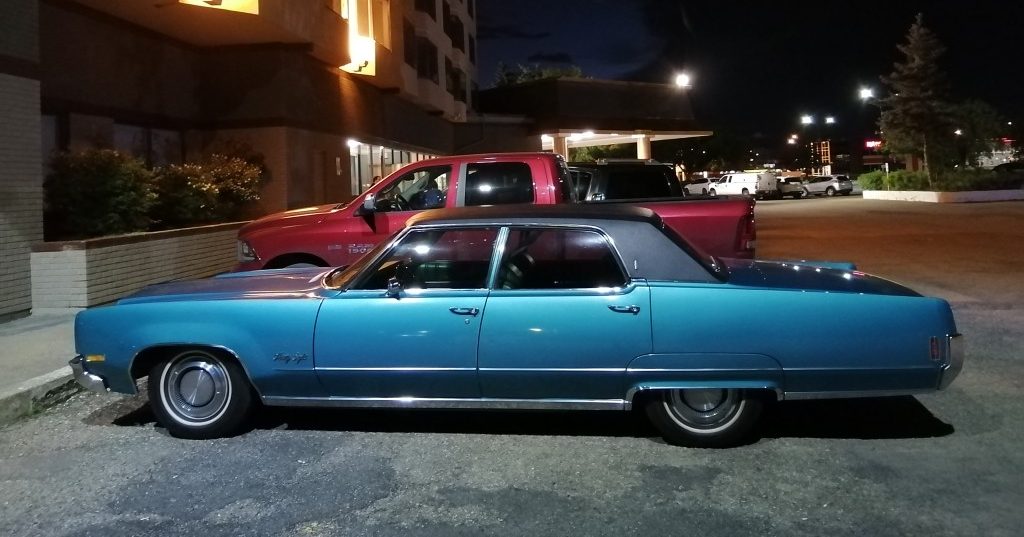 “We went to the Wood Buffalo for drinks. I heard someone leaving and say to our bartender, “Thanks Stephen,” but she said it like she would say my name. When our bartender came back to us I asked him how he spelled his name. He looked at me suspiciously and said, “S T E P H E N.” I said, “Wow, I have only met one of us before.” He asked, “Is your name Stephen?” Well, I thought my response should have made that obvious. He did not seem to be so excited about what had happened but he eventually came around. I asked him if he has ever met one of us before and he said he had not. He said, “It is a rare name.” I told him about the Stephen I met in Shelby, Montana, and how he was not excited about it at all, and that day was on the 33rd anniversary of me being titled with such a troublesome name. Bartender Stephen began to appreciate our situation more as the night went on. We called each other by our first names excessively because unlike people with names like Dwayne or Agustus, we never get to do that, “Hey Stephen, need another beer?” “No, Stephen, I am good for now. Thanks though Stephen.” I wanted to give Stephen a hug and just be like, “Pal, I understand...” I know what he has been through every day of having to deal with this name. We shared stories of trauma and the war we have to fight daily. He told me he has given up on it and he has just accepted Stephan, Stephon, and Steven. I told him I gave up the battle a few years ago and just became Beaver instead. It was a nice moment of really understanding someone about something. I think it is the first time I have ever been able to be 100% completely and fully empathetic about anything in my entire life...!”
— Name Twins
[View All]