April 24
Dani and I went out for breakfast and I indulged in a chocolate fudge cheesecake milkshake to start the day.  It is not exactly the cornerstone of nutrition, but it was damn good!  I do not regret it. 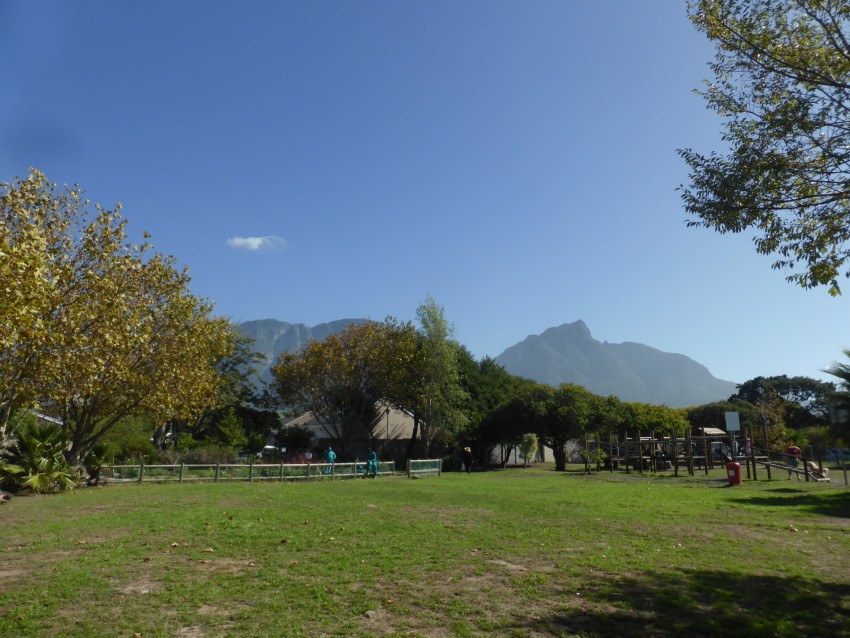 Because I barely interacted with white people for the past six months, I forget about things we do, like growing really stupid mustaches that twirl and curl at the ends.  I saw a man with such a stache at the breakfast restaurant.  I was momentarily embarrassed for my race.  I also do silly things like this (though not exactly that), but it had slipped my mind that I also have an annual month of stupid facial hair. But because I have not had any exposure to that kind of thing in so long I actually forgot how us white people love to look like idiots.  Black people do not seem to be interested in cheesy facial hair.  Black people are more interested in wearing a flashy colored shirt and shoes to attract attention.  Racial differences…

At 13:00, Dani and I went to Rascal’s Pub and Restaurant to watch the Moto GP Superbike races with her friends.  I have seen highlights from Moto GP on television many times in my life, but I have never watched it and I have always wondered who does watch the sport.  It turns out that it is Dani and my new friends in South Africa.  They are the people who watch the sport.  Good to know.

I paid attention a little, but was mostly processing thoughts in my mind during the entire race.  The others I was with were really into it though.  Like ‘into it’ as in total fanatics!  They knew all kinds of crazy stats that impressed me.  I am talking about the women as well as the men who knew tons about the sport.  It is really impressive when women are dedicated to a specific sport.  It is sort of uncommon and that makes it super charming.

When the race was over, we had made our goodbyes and Dani and I walked back to her house.  One the way there, she said to me, “Well, I forgot the cat food in the bar, Donelle forgot her son Ethan’s hat, and I have a beer coaster in my underwear courtesy of Ethan.”  A great quote from a fun afternoon. 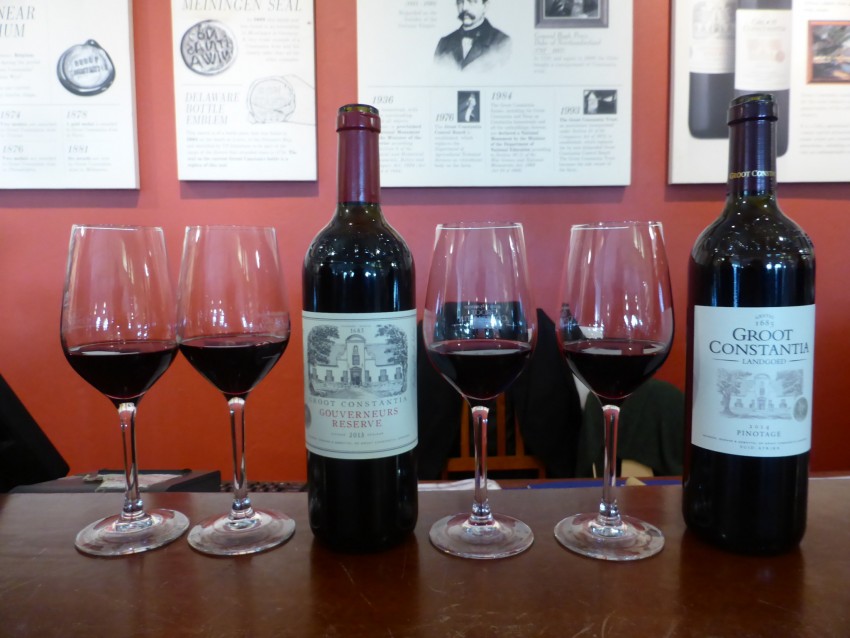 We drove to the vineyard area of Capetown to pick up Jochen from work. Dani and I decided to go on a wine-tasting venture at Groot Constantia wineries to enjoy the pleasures of fine booze.  The winery was established here in 1685.  1685!  It makes me imagine the scenario of Europeans arriving on a boat: “Alright mates.  We are here.  Whew, that was a long trip. Now, let’s create a way so that we can get pissed.  Plant these grape seeds right over there.  Oh wow, there are indigenous people with dark skin living here.  How very interesting.  Okay, have you got those seeds in the ground yet?” 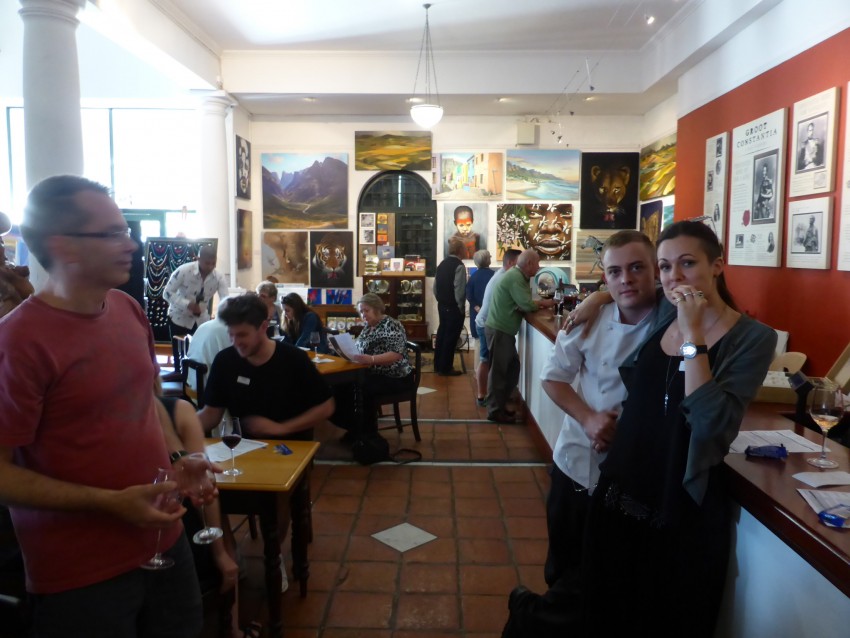 Groot Constantia. Since 1685. ‘Alright mates, we have arrived in Africa. Now let’s set up a winery so that we can get pissed!’

I climbed into a giant barrel to get a photo with Dani for our friends in London.  After I was inside, a couple of girls sitting close by asked me how I got into the barrel.  I told them that I was born inside of it.  As I went to make an exit from the barrel, I made a lousy somersault for dramatic effect and two condoms fell out of my sweater pocket onto the grass in front of the barrel.  I tried to grab them and pick them up before anyone else noticed, but Dani had seen them.  She said, “Yep, and Beaver was also born with condoms in his pocket!” 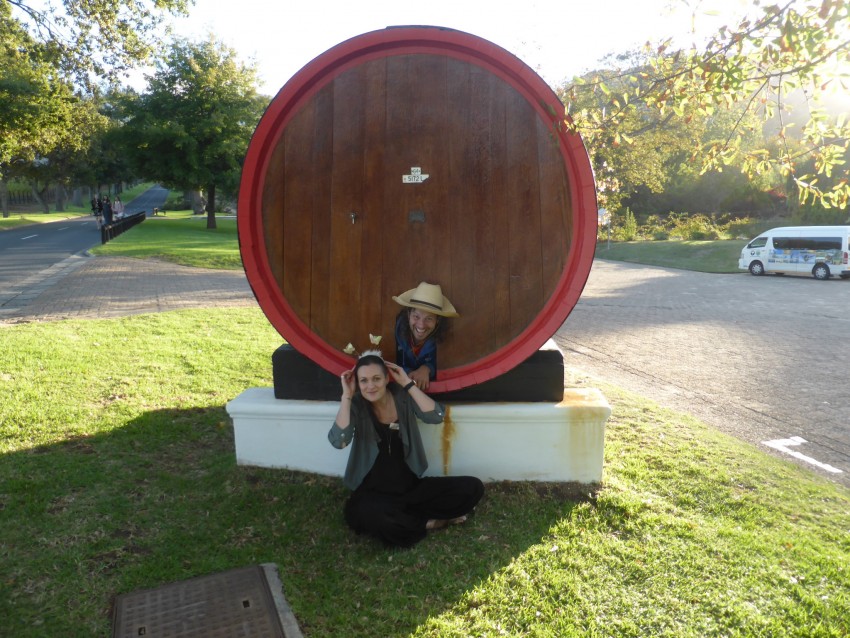 Hanging out with Dani B and being winos.

Jochen drove us winos home.  Dani and I went shopping for a braai (South African for barbecue), but we were drunk and bought everything for dinner except the wood necessary for cooking it on which was our priority for going to the supermarket in the first place…  Silly winos.

I sang this song in my head all afternoon…

Jochen is a chef and whipped up a dandy of a meal for dinner.  It makes me think that I need to live with a chef.  My capabilities of boiling water or making toast seem like they could use an ever present palate pleasing chef in the house… 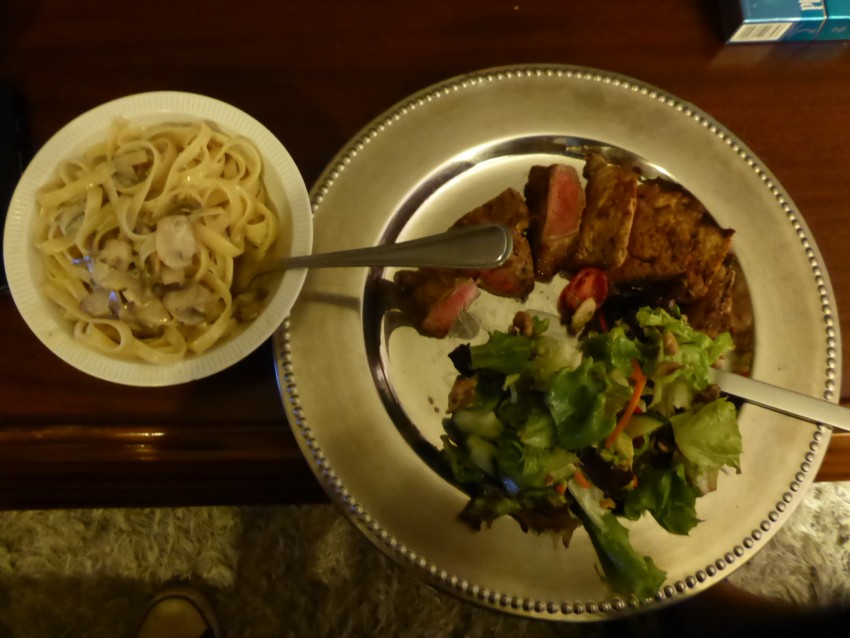 Dani lives with a chef. Should live with one of those!

I played the Boodhound Gang ‘Hurray for Boobies’ album as we were eating dinner.  If you forgot that album existed, please give it a listen.  The lyrics are so witty and entertaining…

A friend of Jochen and Dani’s came over to the house to hang out for the evening.  He told me that he worked in the most prestigious hotel in Capetown.  According to his numbers, 70% of their guests are from the United States and the rest are Europeans.  Due to the media, the Americans usually arrive with a minimum of three bodyguards.  The hotel had bodyguards on stand-by, but the Americans do not trust the South African hotel’s bodyguards so they bring their own with them.  I asked him if these are famous people staying at the hotel.  He said they used to Google the guests, but none of them are anybody of significance.

People are trained to be afraid.  ‘Oooh, I am going to South Africa.  It is so dangerous, but I am so brave.  I will take three huge men to stand around me all of the time to make sure that I am safe.’

The media distorts things so much.  I am not super comfortable in South Africa because of everything I have heard about the country, but I am certainly not ‘three-bodyguard scared.’  What is the point in coming here if that is how you feel?  My friend, referencing this and the excessiveness of want for protection, exclaimed, “Come on!  There has not been an incident with a guest from the hotel in the 16 years of the hotel.”

“I was riding around with my 17 year old cousin.  There was a girl who pulled up beside us at a red light. He asked me, “Should I race her?” I asked him, “Should I roll down the window to get her one of these then?” and I showed him a practice head-nod. He laughed. As I was rolling down his passenger tinted-window to do just that, he revved the engine of his truck for a second. The girl looked over at me and I gave her a nod. A moment later a wrinkly face leaned over from the passenger seat and an old woman said, “Hey, that is my daughter, fuck off!” It was amazing. The light turned green and the car took off. We were still sitting at the light, laughing!”
— Brooks, Alberta.
[View All]