April 28
It took me forever to get my things together this morning.  But, that was sort of a convenience as I was waiting on wet clothes to continue drying.  The idea of arriving in London two days later and unzipping my backpack to pull out soggy clothes seems pretty unpleasant. 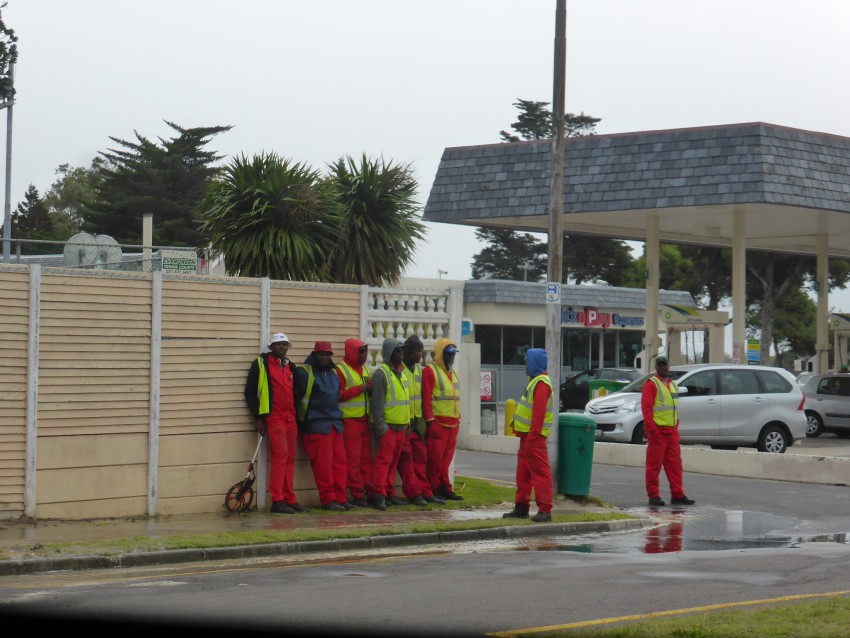 Capetown city employees, hard at it.

It is my hair, and I can decide who cuts it.
Dani and I hung out for the day and went to a shopping mall in search of a haircut for me.  I am very specific on this…  I want a white woman to cut my hair.  It is my hair, and I can decide who cuts it.  I do not want to go to a place that trims men’s short hair.  I want a hairdressing woman who understands long hair.  My last haircut was by a man with short hair.  It was terrible.  I have had a black woman cut my hair before.  She made a mess out of my locks.  It is a different system.  I would not let an Asian man perform laser eye surgery on me when I was in Korea either.  Through trial and error, I know what I require to get my community of follicles shortened.  And, since I have not had a haircut since June, I am going to make damn sure that I get what I want.

I had given up on my quest, but then Dani and I went to her mom’s house where her cousin is living.  Her cousin cuts hair.  Not professionally, but she cuts the stuff.  Bingo!  She entered my brown locks with scissors.  I was apprehensive, but I always am.  She trimmed off the hair death.  And she did a fine job.  Feat accomplished!

I made my goodbyes to Dani at the Capetown airport.  It sure was nice to spend time with her.  It was so nice to see her life so far away from the life where I knew her in London. 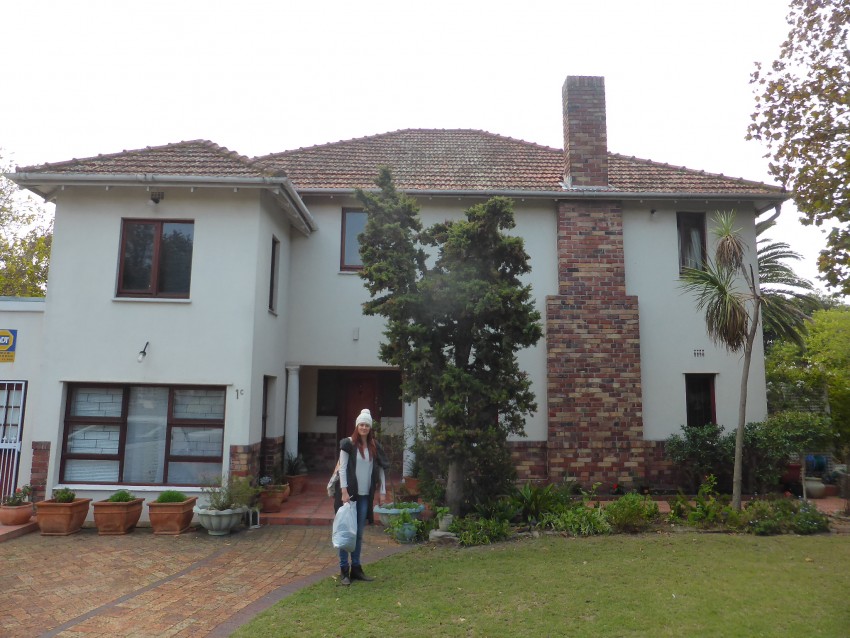 The youth home of Dani B, wielding one hair-cutting cousin.

In the airport I killed enough time that I was actually beginning to run late for my flight.

Then I remembered that I wanted to collect my South Africa VAT refund from goods purchased.

I had bought a fancy shirt, a pair of shorts, and a rad new pair of Converse shoes that I could get roughly 10% of my money back on.  But, I remembered to try to collect this money refund after I had checked-in my backpack that contained all of these items.  I approached the refund desk anyhow, plotting…

Behind the counter was a massive woman who must have weighed 175 kilograms.  25 of those kilograms amounted to the white powder make-up she had all over her face.

I am not sure what she was trying to achieve, but if she was going for ‘Ghost-costume-party theme,’ she was well on her way.

I assumed she had probably spent years being picked in during her schooling, and I could see in her eyes as I approached the desk that these days she was now no-nonsense in her position of attained power.  Her expressions made it seem like she was determined to get her own back.  People like her are dangerous.  I had noticed a sign that indicated I would have to show purchased goods for the refund.  Of course, I had not the goods, but I had the three receipts for said goods.  I approached the desk as politely as possible.

Well, I was right.  25 kilograms of white facial make-up could not hide that this woman hates other humans.  I handed her my receipts.  I happened to be wearing a pair of ‘The Who’ Union Jack Converse shoes that I had washed yesterday at Dani’s and they looked freaking good again.  On the receipt for the new shoes I had bought (which were not the shoes on my feet) described ‘1970’s Converse’ beside the purchase price.  Perfect!  The Who were 1960’s and 1970’s in their heyday.  I hoped to pull it off and charm my way to my tax money refund.  If 25 Kilograms of White Facial Make-up noticed the shoes were actually old shoes, I was going to tell her that I had bought them retro.

25 Kilograms of White Facial Make-up asked to see my goods.  I kicked as high as I could to show her one of the Converse containing one of my feet.  She asked about the other products.  I said they were in my checked backpack.  She said she could not help me as she needed to see the goods.  I said that I had the shoes on.  She said she needed to see the goods.  I asked her about the shoes.  She told me to come back when I could show her my purchased goods and tried to hand me my receipts to get rid of me.  She was too stubborn and power hungry to listen to me.  I needed to make a statement to make her listen.

I took the receipt for the shirt and the receipt for the pair of shorts and I stared into her eyes while I crumpled them up in front of her.  Then I handed her the receipt for the shoes and said I wanted my VAT money back for them.  She said she needed to see the products.  I told her I did not care about the shirt or the shorts but that I wanted the money for the shoes.  She muttered again that she needed to see the products but started the process of refunding me for the shoes.  In the meantime I took off one of the shoes and I set it on her desk.  Well… she flipped out!  She told me to get my shoe off of her desk!  It was amazing.  She told me to never put my shoes on her desk again.  She told me that is not how they do it in South Africa.  I asked her, “Well, what do you expect?  You told me you wanted to see the goods.  What, did you want, for me to stand on my hands?”  She filled out the form.  She handed me a cheque that I could cash at the bank inside of the airport once I got through passport control.

Well, I was far from charming, but I was persistent enough that I got the job done. 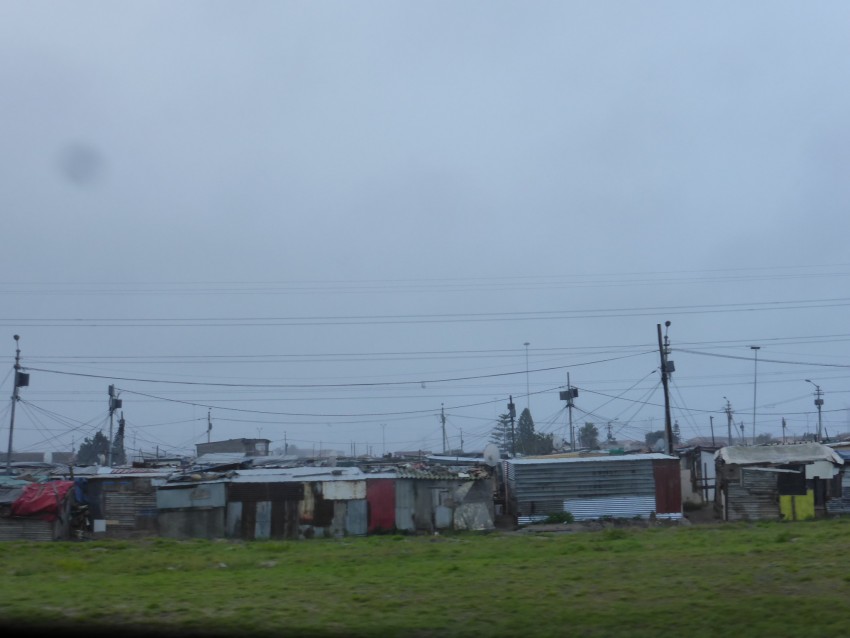 After I passed through passport control I found the bank and I went to cash my 120 rand check.  The cashier took a 10 rand ‘service change’ off the top plus 1.40 VAT to cash a check to give me back my VAT.  Banks.  Dirty thievery.  In the next decade the necessity for them will lessen and lessen as more options for money usage come onto the scene…I hope… 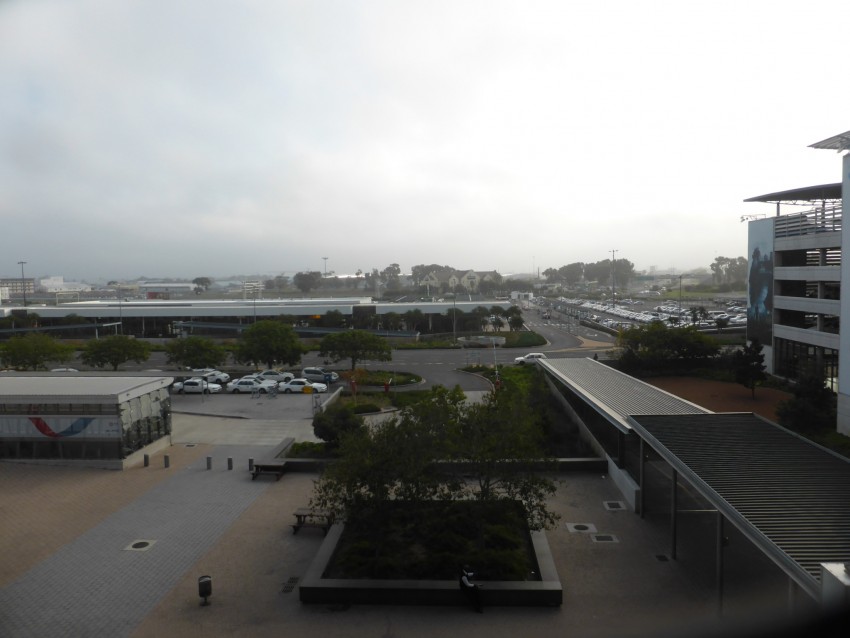 I have never heard native Ethiopian speech before as I sat down in my seat on the plane.  Ethiopian has new sounds that I have never heard in any of eastern or southern Africa.
I went to board my Ethiopian Airlines ‘Capetown-Johannesburg-Addis Ababa-17 hour layover-London’ flight.  I was the last to the plane and the girl behind the desk asked my last name.  “Harris.”  She handed me a sheet of paper and told me that because I have such a long layover that they have a free hotel for me in Addis Ababa, free transportation to and from the hotel, a free dinner, and my entrance visa fee to enter Ethiopia will be waived.  Saweeeet!  I had chosen this flight because A) it was amazingly cheap at $297, and B) it had a 17 hour layover in Addis Ababa, Ethiopia, a place I have never been before.  I had already mentally planned to pay for everything that they were now giving me for free!  So cool!  Fly Ethiopian Airlines everyone.  They will let you see their capital city on their money if you accidentally plan your layover right!

When the television screens lowered from the ceiling to give us our safety briefing before moving the plane towards the runway, they announced that audio devices were not allowed to be used during the takeoff or lands.  Then they showed the devices not allowed to be used: A Nintendo Gameboy, a cassette playing Walkman, and a cellular phone with an external antenna.  The video has clearly not changed in at least 20 years.  There was even an ashtray in the door of the toilet.  Wow!  Everything is so outdated that I hope they never ever change it.  It jogs memories and allows you to walk through your past for a few moments. 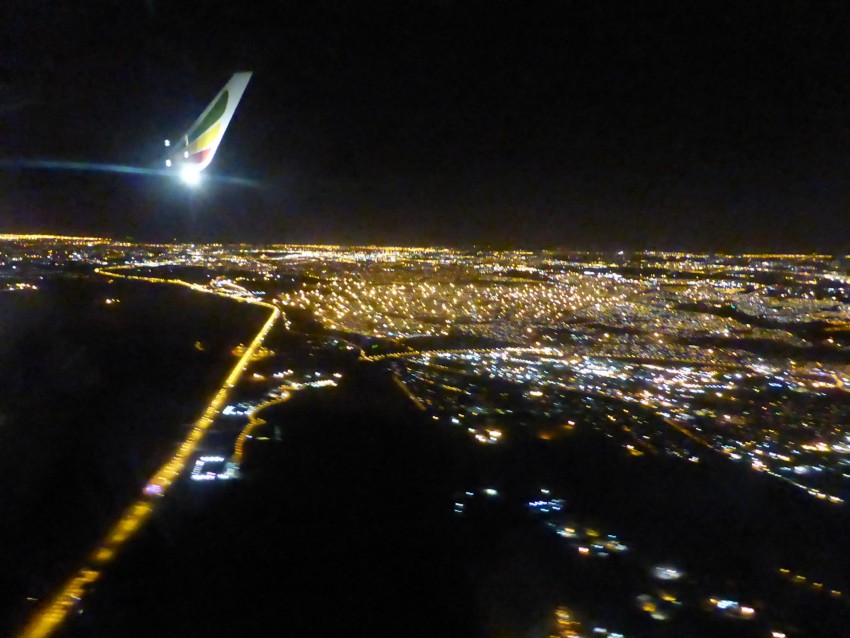 Lousy airplane sleep.  Descent into Addis Ababa.  Exit plane.  Check with the transit desk.  Handed a sheet of paper with a hotel name on it.

I filled out some information on the form and went through immigration.  Free entrance visa because they said I am in the country for less than 12 hours.  He did not even stamp my passport.  I told the immigration office that I will be in the country for 17 hours and asked him if that will be a problem when I return.  He said it would be no problem at all!  Heck yeah!

Pass though immigration.  Country #90.  Country 90!  I have now been to more countries than anyone I have ever encountered in my life.  I remember meeting a Japanese man in 2007 who though he had been to 82.  I am not trying to better him…life just happened to be this way though I sure would not have known that 9 years ago.  90 countries is a lot of governments who have deemed me fit to visit their land…

A man about my age working at the airport took care of me and found me the shuttle bus to take me to Global Hotel.  He told me that I am going to enjoy Ethiopian women.  I told him that I like women everywhere.  He said I will really like their version of them.  I asked him about HIV.  He said that up until two years ago they used to think about it, but told that the numbers are so low that everyone has kind of forgotten about it.  A pretty woman walked past.  I winked at him and glanced her way.  He told me she is only 50% pretty and said I would find much more gorgeous in the city.

Wow, maybe I will love this day of visiting Ethiopia.

The shuttle bus took me to the nicest hotel I have stayed in so far in Africa.  They fed me a free breakfast as soon as I entered and then send me to a beautiful room at about 08:00.  You can tell someone else picked up the tab because there is no way I would end up in a place with a balcony.

Ethiopian Airlines, you have certainly won me over! 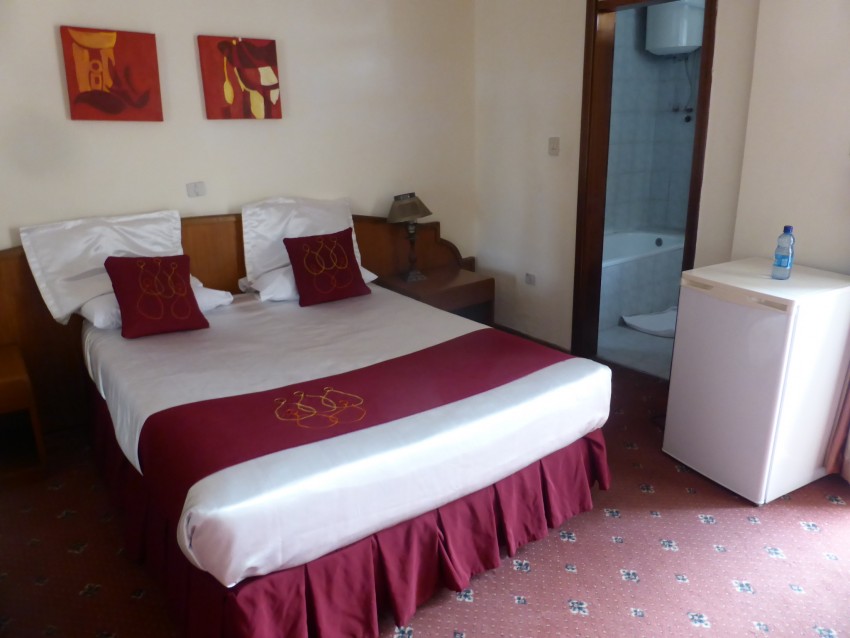 Whoa, I get this, for free! Ethiopian Airlines, you sweetheart you!

“Yesterday a little Indian boy faked us out, standing at a T-intersection with a water balloon in his hand.  Marsha screamed and hid behind my back on the motorcycle.  I did not flinch.  I was hoping he would do it because I could imagine how thrilling that would have been for him.  He pulled back, but chickened out at the last second.  I was grinning at him.”
— Kids in India
[View All]