ACDC aka Axl/DC in London 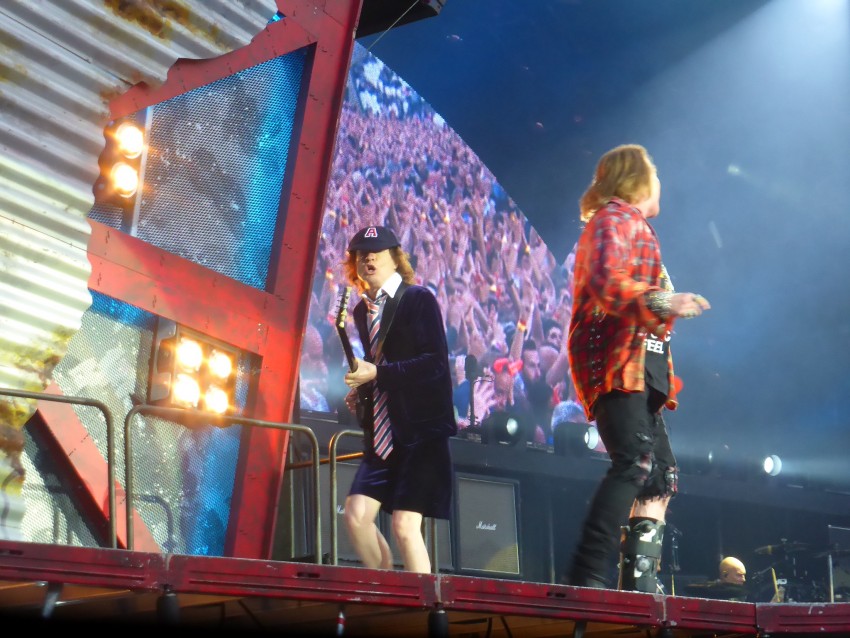 At 15:00 I rushed out the door to meet Karel at the Ritzy in Brixton and from there we headed for the London event of the night…AC/DC nee Axl/DC nee Axl/AC/DC!

I have twice before watched ACDC during the ‘Rock and Roll Train’ tour in 2009.  Their show was totally amazing both nights, but I felt like I have been there and done that when the upcoming European tour was announced.  Then news hit that Brian Johnson was essentially being pushed out of the band because of hearing problems and Axl Rose was going to be the new front-man.  While everyone on the internet was slighting the band for moving Johnson out and bringing Rose in, I got really curious about this new situation and solution.  As the rest of the world was crying treason, I was hunting for a ticket….  A fusing of ACDC one of the greatest bands of all time, and the singer from Guns ‘N Roses, one of the greatest bands of all time…  Chyaa!  There was no way I was passing up this concert rolling through my back yard!

It seems to be difficult to like Axl Rose the man, but it is hard to not appreciate the sounds that man can blast through a microphone whether you are a fan of his work or not… 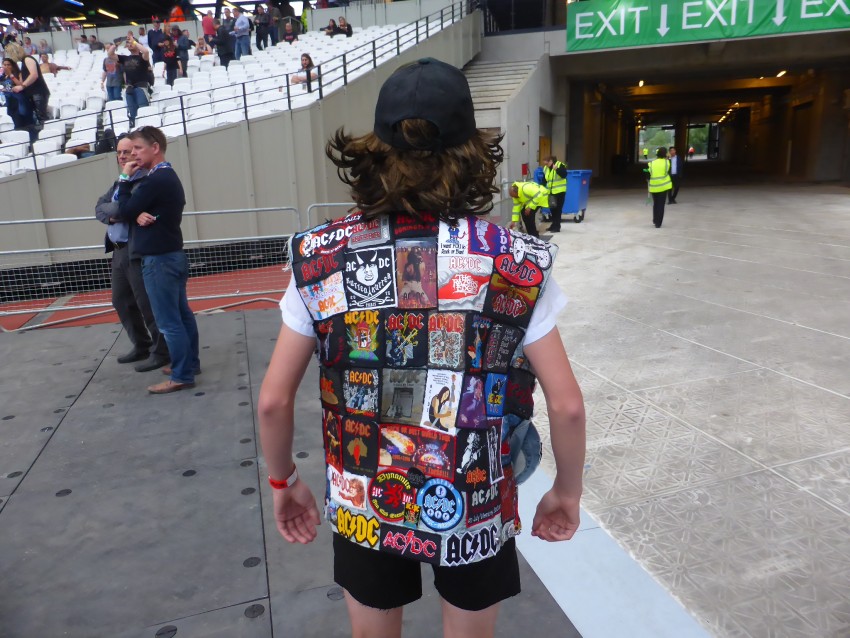 Up until a few days ago I had not been really bothered about Brian Johnson being cast off by the band.  Having already pledged an allegiance to Bon Scot, for some reason that has left me with a ‘meh’ feeling about Johnson.  I realized an error in my judgment eleven days ago when I heard Johnson’s new song, ‘Mr. Rock and Roll,’ a collaboration with comedian Jim Breuer.  In the 3 minutes of 49 seconds of that tune, I realized that the voice I was hearing without ACDC involved in ‘Mr. Rock and Roll’ was the actual voice of ACDC for my lifetime.  But, that voice no longer holds the same title.  It made me sad and suddenly I really began to appreciate what Johnson has done for the band, though I had come to this light six weeks into darkness.  After I heard it once, I played the new Johnson song four times in a row, feeling disappointed emotions towards the circumstances of it all and wondered to myself, ‘Why now?’  Is it because Johnson is the underdog and I always root for the underdog?

But really, how can Johnson who sang with ACDC for 36 years which is six times as longer than Bon Scot was their singer, and who sang in ACDC for three years longer than Scot’s entire lifetime, actually be the underdog?

The release of that new Brian Johnson song sort of took some of the flare out of the Axl/DC phenomenon, but I still could not wait for this show.  Karel and I headed off to meet our friend Andy and then travelled to Queen Elizabeth Olympic Park in Stratford for the first concert to ever perform in the stadium.  A historical band making a gigantic change and playing a stadiums first concert ever….  Crazy. 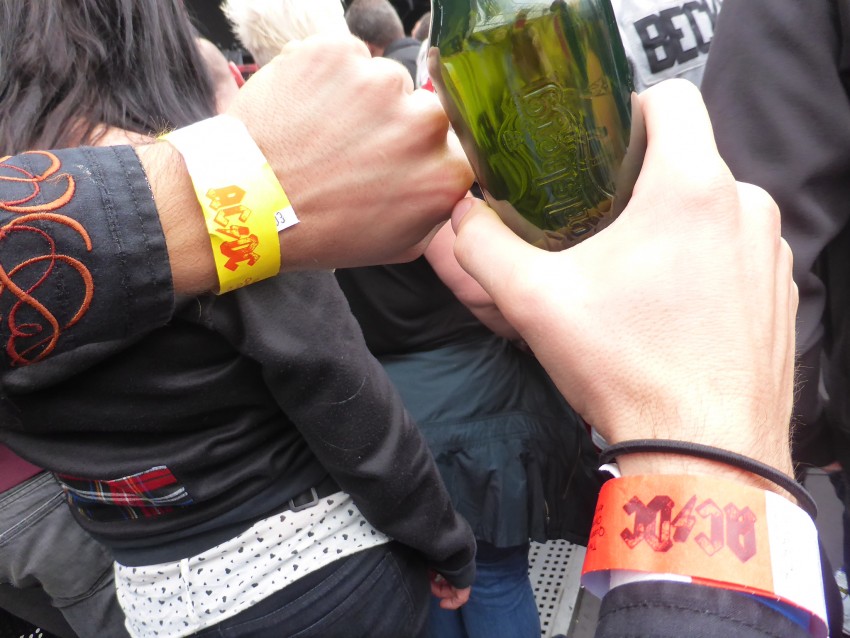 Andy, 10 ACDC concerts, the first being on March 17th, 2009, and Karel, 6 ACDC concerts, the first being on April 19th, 2015, are super fans.  Karel is a massive fan who knows more about the band than anyone else I know, but he calls Andy an ‘ACDC Professor’.  It is hard to call someone a geek for liking ACDC so much, but if there is something to be geeky about, they made a conscious choice for one of the coolest things possible.  We talked about moments, albums and songs.  Opening band, 20 minute break.  Showtime…  YESSSS!

It started off in a hurry in typical ACDC fashion where the band begins the show with the first song off of their newest album, both titled ‘Rock or Bust’.  Axl seemed to be in pretty good form and moves pretty well for a man who just broke a bone in his foot and still has to wear a walking cast.

Rose was covered in jewelry.  His fingers covered in rings, his wrists lined with silver bands, and two bling-bling crosses hung from his neck.  He is an overweight version of Appetite for Destruction and has a belly like a man who seems to have just that.  He still moves and dances like the Axl that you met 27 years ago, but there is so much sweat coming out of his body and running down his arms that the tips of his elbows seem like two leaky kitchen taps.  That amount of sweat has me concerned about his health.

But that voice, wow.  Axl is doing it and Axl is nailing it.  ACDC could have chosen any person on the planet for the vacant job of singer in their band and they decided to choose Axl Rose.  And believe me, they chose him for good reason.  I had the best job on the plant in the summer of 2015 writing a party blog through 51 cities for Europe’s Famous Hostels, but Axl has landed the best job on the plant for the summer of 2016 singing for ACDC.  He and I should compare notes after the tour is done… 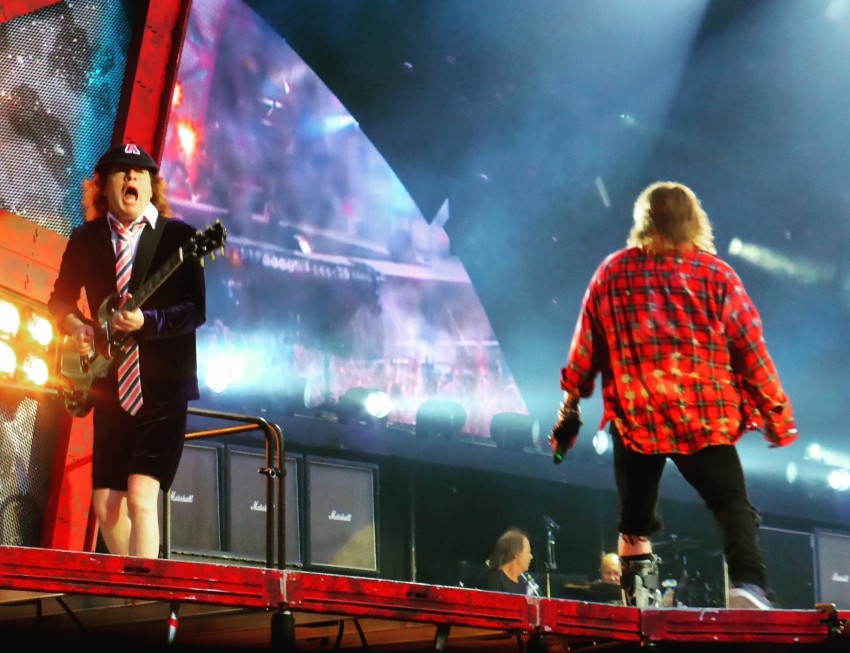 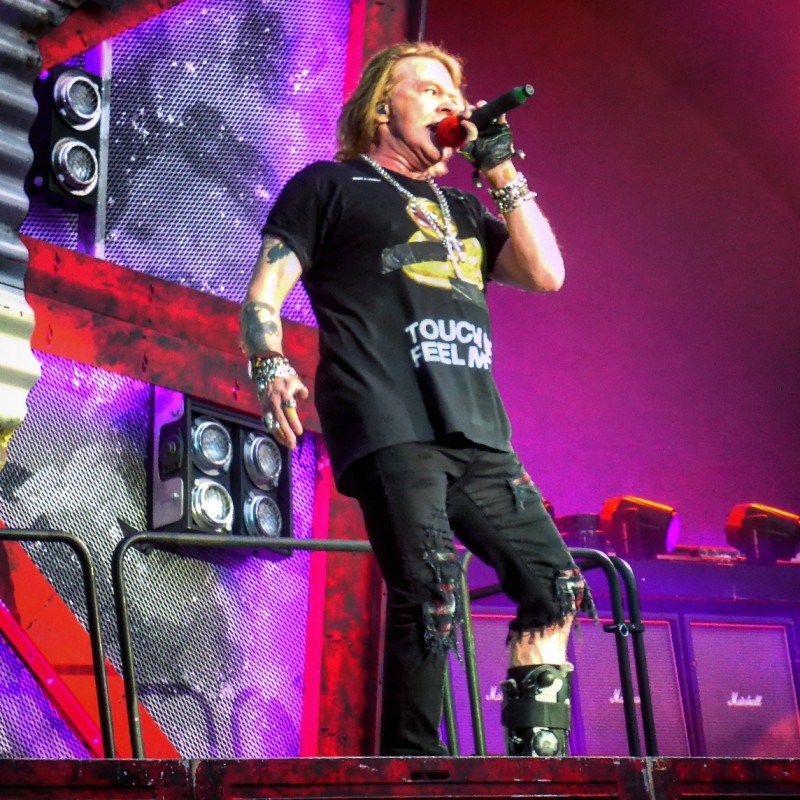 Axl being Brian and Bon.

What better voice can you think of to replace Johnson who replaced Scot as lead singer of ACDC?  A replica sounding version of one of the first two, or someone with their own scratchy and very distinct sound that is nothing like anyone else?  If you said Axl Rose, trust me, you got it right.

On ‘Back in Black’ Axl almost raps the lyrics:
♫ ‘So look at me now,
I’m just makin’ my play
Don’t try to push your luck
Just get out of my way,’♫
in the verse leading up to ‘Cause I’m ba-ah-ah-ack’.  It is him doing his thing…

It took four songs until Rose put on his bandana and hat.  Then by the time the band played their seventh song, Axl, who seemed to think he was Cher, had made four costume changes.  That is the same Axl that I saw in 2010 with *Axl’s Roses as well.

(*indicates Axl Rose calling himself Guns ‘N Roses as the only member of the band.) 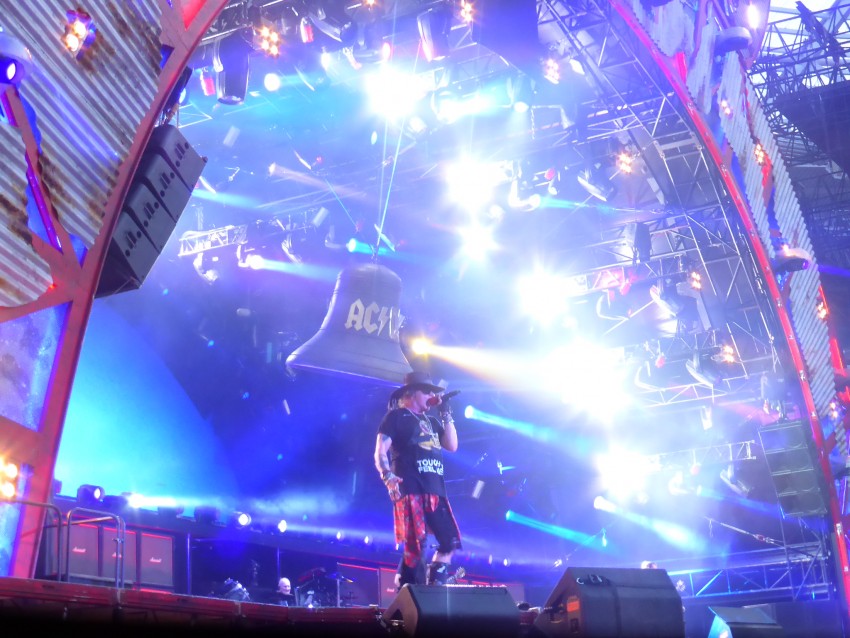 Suddenly you find yourself caught in this weird musical hybrid…
Since Axl only has one full pant-leg with the other cut off for his walking cast right now, you can see the veins in his legs bulge when his voice screeches.  Axl does not sing from his stomach as you were probably taught to do in music class.  He reaches further down into the bottoms of his legs.  When the band plays ‘Thunderstruck’, the song builds from Angus’ guitar intro, as the back up singers sing ‘Thunder’ until the lead singer screams ‘THUNDER’ and you hear that distinctly high and raspy Axl Rose voice.  It is unmistakable.  You know that sound.  Suddenly you find yourself caught in this weird musical hybrid, with the voice that you are used to singing ‘Right Next Door to Hell’ and ‘Mr. Brownstone’ singing ‘Shoot to Thrill’ and ‘Whole Lotta Rosie.’  You imagine a situation where you are in a bar somewhere and Axl Rose is singing in an ACDC cover band to pay his outstanding electricity bills but in this real situation, the band actually is ACDC….  It is all really strange, but it strangely awesome.

On the stage, the only other man who moves from his invisible ‘X’ on the floor is Angus, who seems to not even be human, but rather just a force of energy that blasts through areas of the stage wearing a blue crushed velvet school-boy uniform…shorts inclusive.  Angus moves across the guitar so smoothly that nothing could look more natural for a human to do.  The transition of Angus’ hands from picking song riffs to pick scrapes down the neck of the guitar and back to picking riffs again happen with incredibly graceful movements.  His efforts seem to apply a similar ease that any regular man uses to snap the fingers on his dominant hand along to the beat of a song.  It is perfected art in the way Angus maneuvers around a Gibson SG guitar. 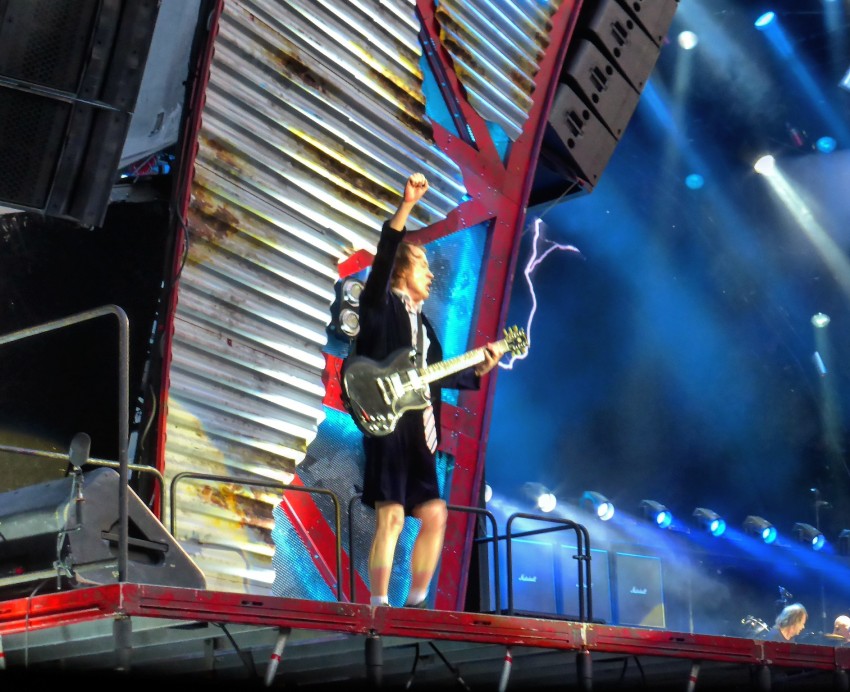 It looks like Angus is shooting lightning out of his SG, which is what he actually sort of does…

As well, Angus’ legs seem to be made out of spaghetti in the way they move.  During the guitar solo breakdown on ‘Let There Be Rock’ the song stopped when Angus stopped.  When the drums kicked back in to blast the song forward once more, one of Angus’ legs air kick-drummed while the other kicked to the sound of the symbol and with that Angus was gone to the other side of the stage in a flash.

FYI – For you non-super geeks that are partly ACDC geeky, the scream at the end of the song ‘TNT’ that you are used to on the record is Angus’ scream. 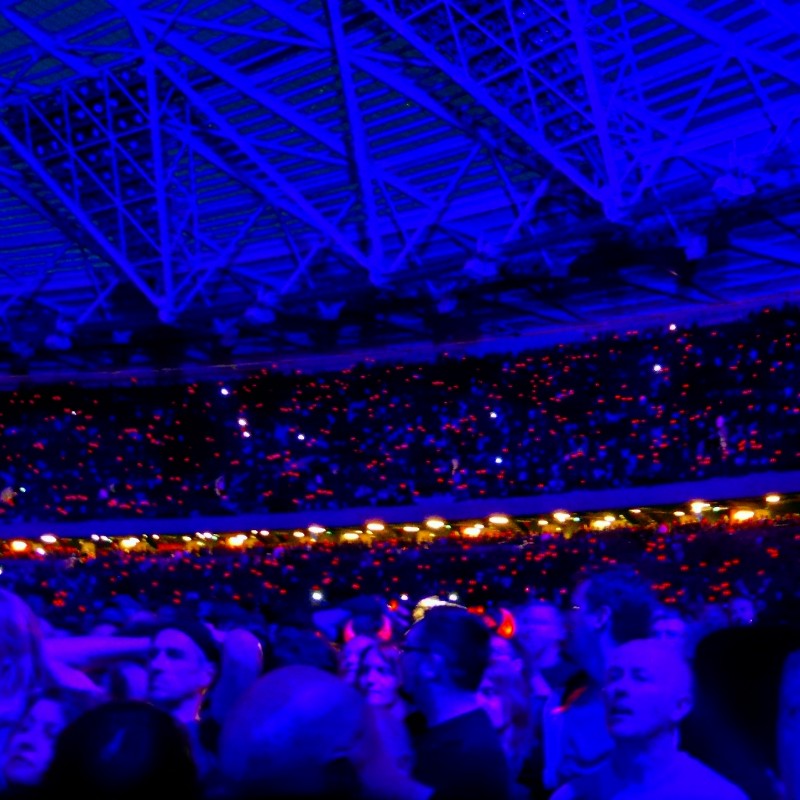 The second last song of the encore was ‘Riff Raff’ and my friends wanted to stand back from the side of the stage so that we could have a view of the entire show at a distance.  As we backed up I heard Andy say, “Fucking hell, Duff and Slash!” and looked to my left to see Duff McKagan and Slash from Guns’ N Roses walking by about three feet from where I was standing.  They were hanging onto hands with women as they moved through the crowd.  I think it is probably the first time in my life where men and a women were holding hands and I did not notice the women and would be unable to recognize them in a crowd because I was staring at the men.  That happened to me with Duff and Slash as they walked past.  I just blankly stared at them.  I was surprised to learn that I am taller than Slash. That also seemed strange.  He has been a massive rockstar for as long as the concept of a guitar riff has resonated in mind, so it seems like he should probably be 10′ tall.  Incredibly, he is not.  Perception is a peculiar thing… 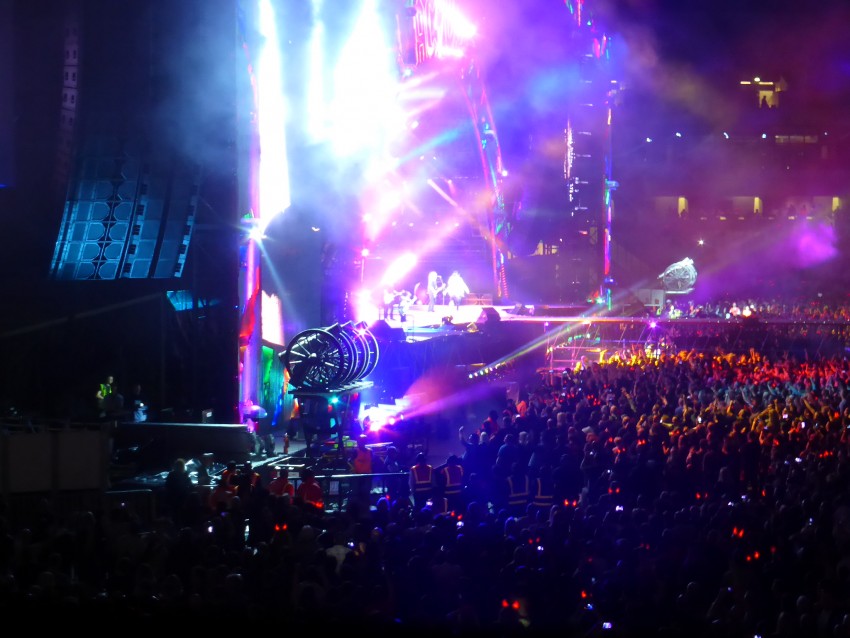 ‘For those About to Rock’ being saluted by the cannons.

Essentially, we went to see ACDC and ended up seeing Guns ‘N Roses as well.  By the last song, Axl’s voice was starting to crack and cut on ‘For Those about to Rock (We Salute You),’ which is understandable.  The man is often screaming banshee howls for three minutes straight at a level which most humans can only sustain for a few seconds if they can ever get their voices there in the first place.  That voice and that band…  What a show.  What a night.  Axl/DC kicks a lot of ass.

If you are still moaning about it and you still have your tickets, well chump, you are in for a treat.

Setlist:
‘Rock Or Bust’
‘Shoot To Thrill’
‘Hell Ain’t A Bad Place To Be’
‘Back In Black’
‘Got Some Rock & Roll Thunder’
‘Dirty Deeds Done Dirt Cheap’
‘Rock ‘N’ Roll Damnation’
‘Thunderstruck’
‘High Voltage’
‘Rock ‘N’ Roll Train’
‘Hells Bells’
‘Given The Dog A Bone’
‘If You Want Blood (You’ve Got It)’
‘Sin City’
‘You Shook Me All Night Long’
‘Shot Down In Flames’
‘Have A Drink On Me’
‘T.N.T.’
‘Whole Lotta Rosie’
‘Let There Be Rock’
‘Highway To Hell’
‘Riff Raff’
‘For Those About To Rock (We Salute You)’ 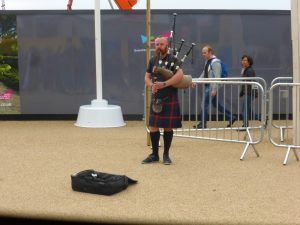 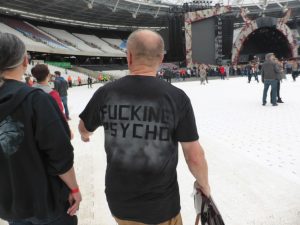 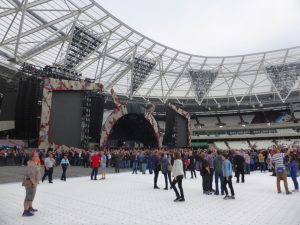 We were there early! 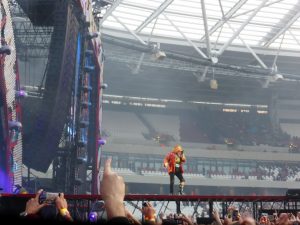 Axl looks a little like a pirate here. He just needs an eye patch and a parrot on his shoulder. 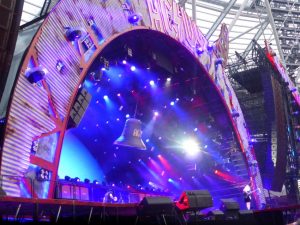 “It looked like hot chocolate on the floor.  I could not believe it.  I just stared at it in awe.  Can't a guy fart while he is peeing anymore?”
— A friend from home
[View All]