Scorpion Eating in Mexico City.
Dec 9
Clint showed up just after Irmante and I had breakfast at out AirBNB and we all headed to Insurgentes, an area of Mexico City, to change our American dollars into pesos.  It is a good time to be in Mexico as $1 is worth 20 pesos.  When I was here in 2010 it was about 12 pesos for $1.

Get to Mexico right now people!

Irmante was in charge and she lead us to Mercado de San Juan where we walked in to find chili flavored grasshoppers at the front door.  Time to man/woman up!  Irmante and Clint were pretty excited about what we were about to eat.  I was in the game as well, but much less excited.  I just started eating vegetables 10 years ago.  I have eaten calf testicles at home and really strange things over these years of travel: bulls blood soup in Korea, kangaroo and camel in Australia, hard boiled pigeon eggs in China, turtle in Papua New Guinea…  I never ever like the flavor of any of it, but I always try it and never back down from extremely exotic foods.*

*Exception – pig brain soup in Vietnam for $0.50.  I just could not bring myself to try it. 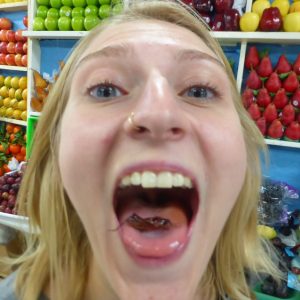 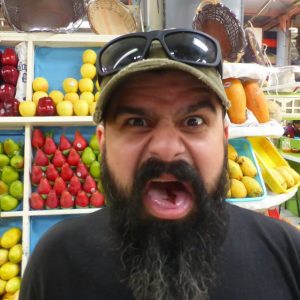 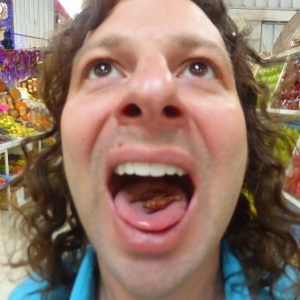 The three of us tried different versions of grasshoppers, and truthfully, they taste pretty good after they have been cooked in lime or chili sauce.  The aftertaste is not as swell, but initially, they are pretty good.

Irmante, Clint and I kept walking through the market until we found the vendor we had probably been looking for.  On the counter were trays of insects ready for consumption.  The biggest eye-opener was a tarantula on a salad.  Whoa…  I will take a pass on that! 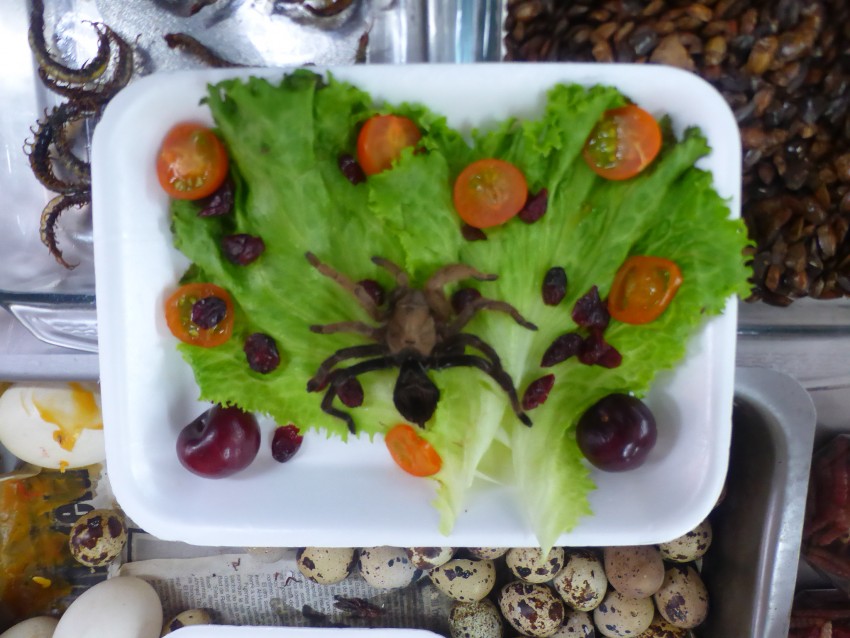 Tarantula Salad… No thanks… 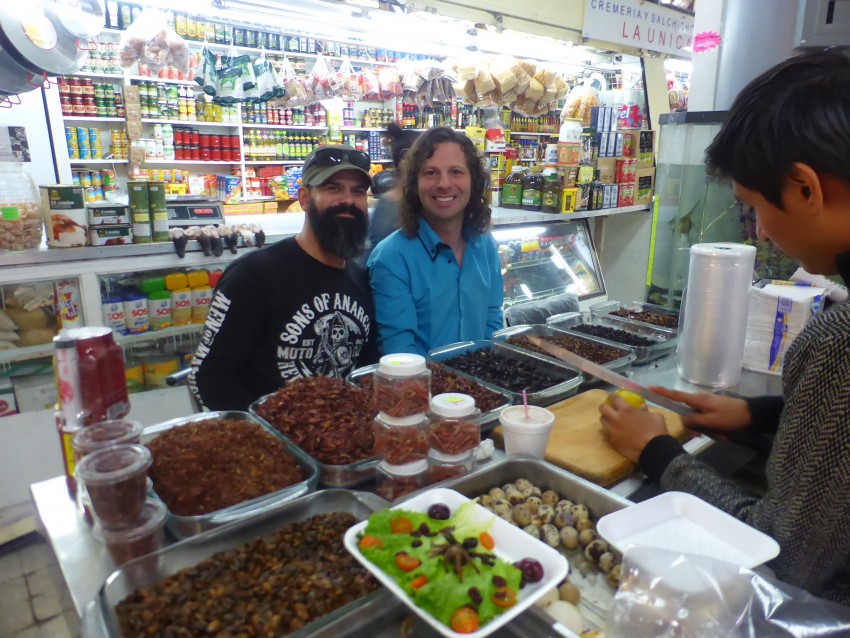 It cost 200 pesos ($10) for the scorpion eating.  The preparation was serious.  I thought we were just going to be chewing off a hunk of scorpion.  Oh no, it would not be like that…
It was a plate prepared with:
-escorpion (scorpion)
-hormiga chiganta (giant ants)
-shaüis (some kind of bug)
-chapulin con anjo (grasshoppers with garlic)
-tenebrios (mealworms) 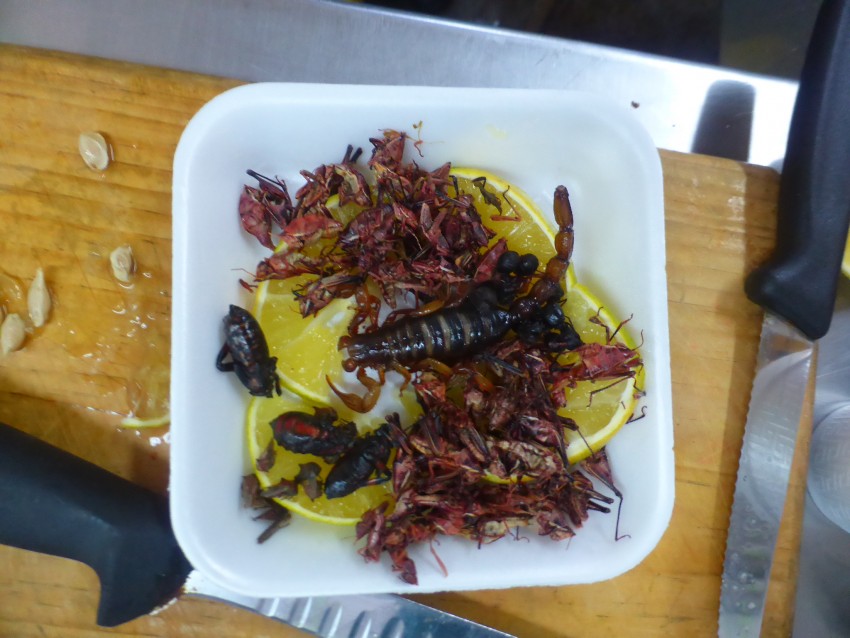 Mamma never made meals like this when I was growing up…

The man preparing it was telling us that scorpions are good to fight cancer.  He was adding flavors from containers, piling on more extra bugs than we needed, and then dousing it all with an alcohol called mezcal that had centipedes inside of the liquid.  The man set the plate in front of us as well as a shot of the mezcal and a lime. 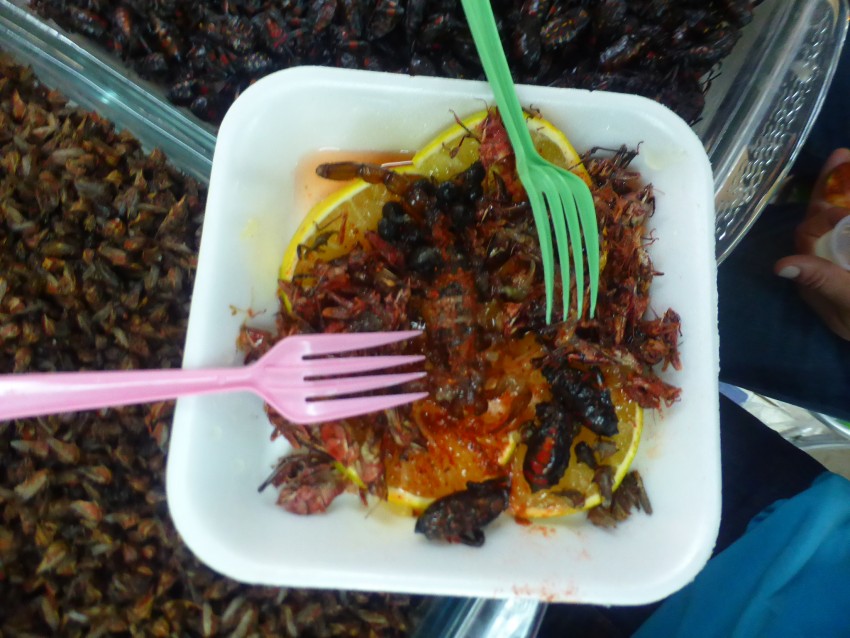 The three of us were so polite to each other, each insisting that the others should start the scorpion eating.  Clint stepped up first and bit off the end of the scorpion like a champion.  He chewed it, commented on the texture that I would soon find out about firsthand, and swallowed it down. 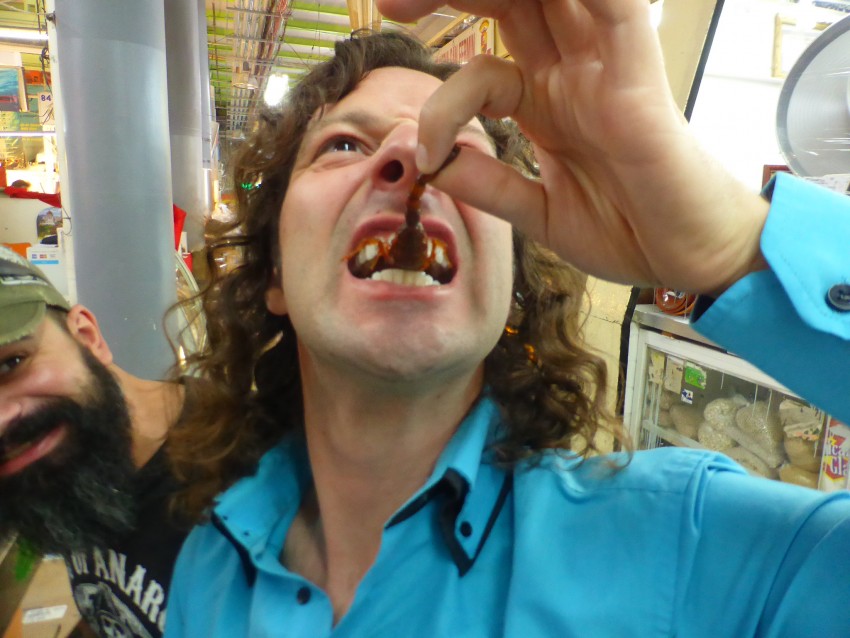 I held the scorpion by the tail and I put it to my mouth.  The scorpion had been having a bath on the plate in mezcal and various added flavoring, so it was actually dripping when it hit my lips.  As I went to take a bite, a claw kind of pinched my lip and that scared the heck out of me.  When I went to bite the body in half, the tail separated and I had the whole remaining scorpion torso in my mouth and on my lips.  When I went to really chomp into it, the scorpion separated in two but a claw hooked my lip again.  When I bit what was inside of my mouth the soft mushy insides of the creature squirted in my mouth as I tried to chew it.  It was a bitter flavor and the outer part of the scorpion was quite leathery.  I was trying to get it down and I gagged.  Then I tried to chase it with water, got a mouthful, gagged again and spit the water all over the place including some on the camera that Irmante was recording with.  I got most of the creature into me though.

My friends were laughing in hysterics!

Irmante had a bite and handled it well.  Both her and Clint were way better at scorpion eating than I.  It really impressed me how they could consume it so easily.  My body and stomach were freaking out, ‘No!  Wait!  What in the F are you doing?  DON’T PUT THAT IN ME!  THAT DOES NOT BELONG IN ME!’

There was some scorpion left, and I was determined to eat it for them to try to get it down.

I put the whole thing in my mouth on a count down from Clint and I hurried to chew the remainder of the body of the creature.  The bitter and soft insect inside of the scorpion squished in my teeth as I chewed.  I immediately chased it with water.  I managed to swallow most of it and complained about the awful insides that were on my teeth.  I gagged hard.  I immediately gagged again and coughed.   Clint handed me a shot of mezcal and I chased what was left of the scorpion down.

Irmante, Clint and I finished the scorpion tail and I was able to eat that part with little difficulty.  We rounded off the meal with a centipede that was rather tasty by comparison to what we had just tested our culinary limits on.  A centipede is not as juicy-squirty as a scorpion, and a centipede actually has something of a nutty flavor….something for you to know should doomsday happen and all that survives happens to be you, some scorpions, and some centipedes.  You will have had the fortune of reading this handy guide to let you know where to begin your first meal…

Here is the video of the crazy today: 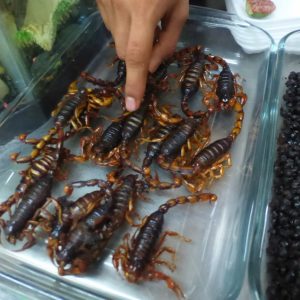 We’ll take that one! 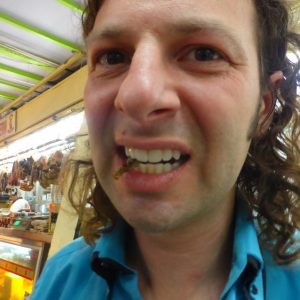 A centipede is surprisingly easy to eat after you have tried scorpion. 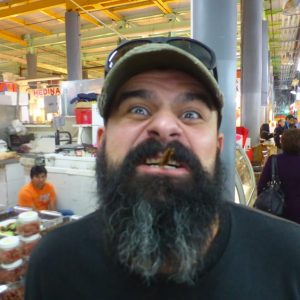 Centipedes are not so bad. 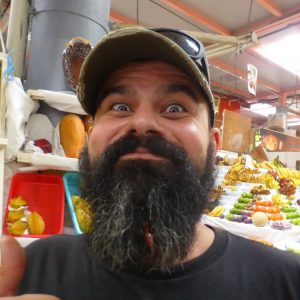 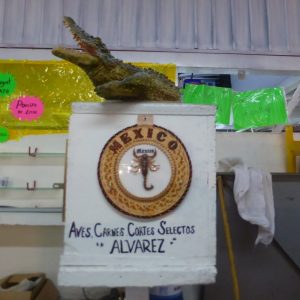 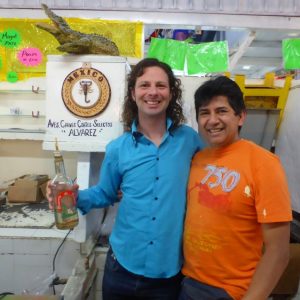 We followed up the day by watching Luche Libre Mexican Wrestling and a wrestling match on the subway at midnight.  For the fun story on that, click here.

“We were walking down the street in Kampala to go to the hotel. We had just been to the bakery and had treats in paper bags in our hands.  I had one paper bag and Stella was walking behind me with two.  It was daytime as we walked past a group of four or five motorcycle taxi guys. After about 10 steps, I realized that Stella was not right behind me.  When I saw her, I noticed that one of the motorcycle taxi guys had her by the arm.  My mind was mentally checking what was going on as I saw the paper bags shaking back and forth in her hand as a man in the group tugged on her arm and she tugged back to free herself.  It was strange as I do not even remember making a decision in my mind. After it was over, I realized that I had walked back to where the man had a hold of Stella’s arm.  I moved in without thinking about anything and I slapped the man as hard as I could on the top of his hand that had a hold of Stella.  I remember seeing his hand open as soon as the smack action completed.  Stella was released and I turned and walked away, her right behind me again.  I just reacted without thought.  I could hear the other men laughing at the man who had grabbed Stella. I was surprised at my reaction. The man who had grabbed her was very, very surprised by what had just happened, and his friends were also surprised by the events.  Stella and I just carried on again and said nothing about the incident.  I realized as we were walking away that the expression on my face had never changed from the moment that I realized she was not behind me, to smacking the man, to us walking away again.  I just dead-panned the whole situation.”
— Kampala Motorcycle Taxi Drivers
[View All]