Bogota Whores and More
July 18
I asked him, “Where are we going?  To a bar?”  He replied, “With whores.  A whores bar!”  It would be an adventure in Bogota…

I climbed Cerro de Monserrate in the afternoon to have a cool overview of the city.  Well now that is a lie.  I took the cable car up, which did the climbing.  That was kind of a misleading sentence.  I had to autograph a mob of kid’s arms with a marker up there.  Meet the gringo superstar!

After I got back to the hostel I snuck my bags that were in the registration room into one of the dorm rooms and locked them in a locker, exactly as I was told not to do.  I did not know if I would be staying with my friends or coming back to the hostel at night so I did not want to pay for a bed unnecessarily.  But that meant I had no locker.  So that meant I had to be scandalous.  I am not interested in anyone borrowing my passport and money belt.  I waited until one of the guys working was chatting to a friend on his laptop, and until the other guy was busy on the internet.  I moved my bags inconspicuously.  I dashed out the door.

It had been three and a half years since I last seen the Colombian boys: Diego, Saul, and Mauricio, who used to work with me at Hard Rock London.  Diego is four days from being a completely licensed pilot and Saul works with software for major companies.  Those two live one block from each other in this massive city of 7.4 million people.  It is pure coincidence their families have houses so close together.  They actually met in London.  That have been best friends since.  So cool.

There are things that are really special when travelling. One is meeting friends from one part of your world a different part of the world.  The other is going to the places in the world where friends that you have met somewhere else are from and seeing their lives.  That is special.

Diego picked me up with his girlfriend, we went to a supermarket to buy beer, aguardiente (a strong alcoholic beverage Colombians love to consume), and headed to Saul’s beautiful apartment. The standard of living in Colombia is nothing like I could have ever expected.  I was expecting shanty-town shacks.  My friends here live in houses that would be nice even if they were in uber-modern Germany.

We shared our life stories from three years ago until now and drank a lot of aguardiente.  I told them I needed to be careful as I can drink beer for three days straight but get incredibly drunk from hard liquor.  I asked the boys if they like the taste of aguardiente.  Saul said, “I like but… is not like drinking a cake.”

We went to a bar after six beer and one liter of aguardiente.  Diego went home so Saul and I decided to visit the seedier parts of Bogota.  We got into a cab and headed far into the city.  That was when he told me we would be going to a ‘Whores Bar.’  When we got out of the cab, the bar street seemed a little like a run down version of Soi Cowboy (Cowboy Street) in Bangkok where flesh is for sale.  We went into an establishment.  Saul spent 100,000 on some drinks and some entertainment for us.  Entertainment was slow to arrive, but the drinks were cold.  Saul told me that every woman in there was a whore.  “You see woman.  Is for sure a whore.”  Men were sitting everywhere and lap dances were taking place and men were getting boobs smashed in their faces.  It was a large bar and there was a stripper stage in the middle of the room with tables and chair crammed in all around it.  Entertainment eventually arrived for us which was a very tall woman who took off her dress, and then her bra, and eventually her underwear.  When she looked at me I pointed to Saul sitting on a stool where she did a dance for him, ground on him, slapped her breasts in her face and climbed on the chair to slap her ass cheeks on his face.  I was a little distant, but got some of the same treatment from her though not as forcefully.  She took my hands and was grabbing her breasts with them as she straddled me on my stool. It was a nice time.  Neither of us has interest in prostitutes, but we were interested in ridiculous entertainment.  And it was ridiculous entertainment.  I was told the price for the whole journey was C$50,000.  No thanks.

Out of the 25-30 prostitutes in the bar, there were only two that I thought were beautiful.  Saul spent a lot of money on aguardiente and I was getting very drunk.  The scene was crazy. There would be girls on the stage, dancing, walking around, hitting on us, and grabbing my package through my pants as they walked past.  Bogota whores…  There was porn on the big screen televisions all around the bar.  And then suddenly, randomly, a man would be on the stage, singing karaoke.  I can say that it is a very strange scene to be in a bar with whores everywhere, some men are getting their faces slapped by breasts, a man singing traditional karaoke songs on the stripper stage while on the television on the background a girl gives a man oral sex.  Wowzers.

We went to several other bars to look at the melee, but I was getting hard-liquor-uncool drunk.  Saul was asking me, “Do you want to party more or you want to go home?”  I never like to quit.  As we were entering another bar a doorman went to search me for weapons.  The lighting was dark.  Suddenly I felt a tug at my belt-loop and looked to see that my camera was now in the doorman’s hand.  The strap of the camera was tied to my belt-loop and that is the only reason that it did not disappear completely.  Realizing he was not going to be able to steal it now that I had figured out what had just happened, he handed it back to me.  It happened so fast that I did not have time to think.  And this is a good thing as the doorman was squatted down and had I been able to think quickly enough, had I realized that he was trying to steal my camera at the moment, I would have probably kneed him in the face.  And that would have been very bad for me and as the bouncers who would have certainly taken care of their man.  It makes me angry when I do not realize what is going on fast enough to react, but in this incident I am glad I did not.  It would have been very bad for me had I time to react at the moment.

But, it ruined my night, and I was so pissed off that the man who was supposed to be protecting us from each other was the man who was trying to steal from me.  I was furious.  I told Saul what had happened, left him, got in a taxi and went to the hostel where my bags were.

I ran the bell at the hostel at about 4am.  Someone let me in.  I asked them if they had a spare bed.  They gave me some sheets.  I battled to get them on my bed and went to sleep. 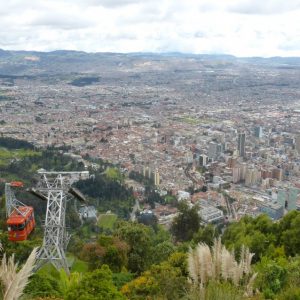 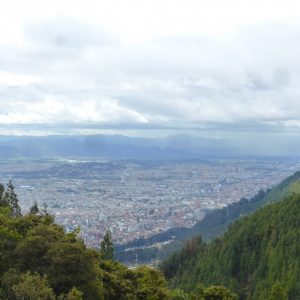 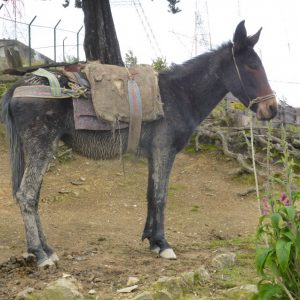 Thoroughbreds for hauling supplies up the mountain. 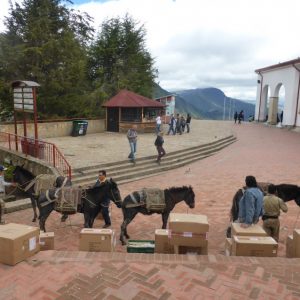 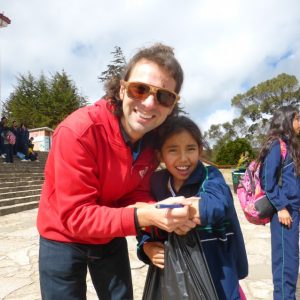 Having to autograph kids because I am a gringo. 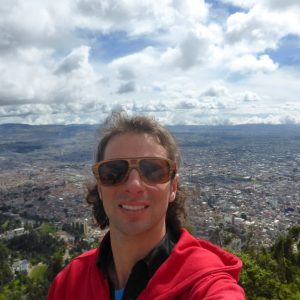 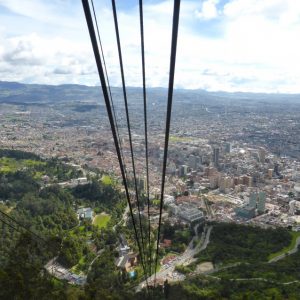 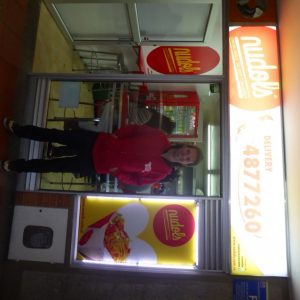 Store owned by my friend Nathali. 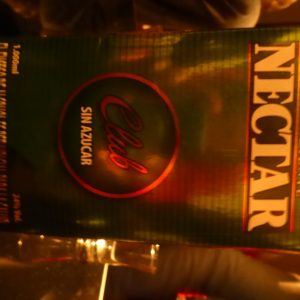 Colombian alcohol that seems to be poison to me. 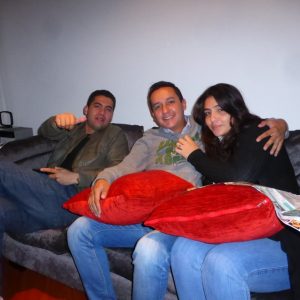 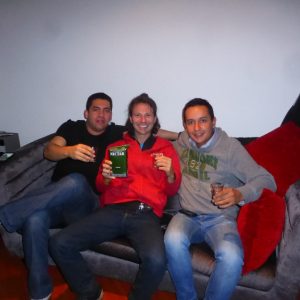 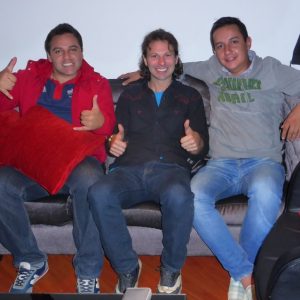 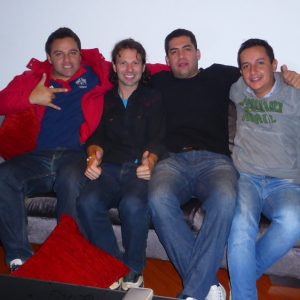 Mauricio, me, Saul, and Diego 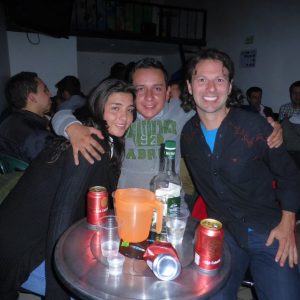 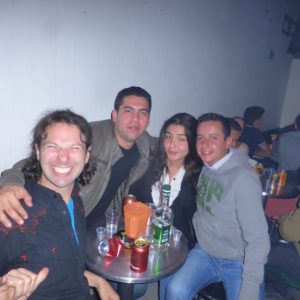 A party that would soon turn into chaos.

“The Addis Ababa airport is a rundown white building that feels like a warehouse or storage facility.  There are no amenities and there are barely places to find something to eat or drink.  It started raining outside and that meant that it started raining inside of the airport as well even though there is a roof.  I took a one of the plastic trays for scanning baggage and put it under one of the 50 or more drip areas to catch the water coming down from the ceiling.  Then just before I went through the x-ray scanner, the electricity stopped and there was a temporary blackout in the airport until they could get the emergency lights working.”
— Ethiopia's Capital Airport
[View All]