Back to Walvis Bay: To Psychoanalyze

April 14
I woke up in the car in a gas station, though I am not really sure where it was when I started off for Walvis Bay this morning.  I think a sign said that I was 56 kilometers from Swakopmund when I hit the road while it was still dark.  My third sleep in a car in three nights.  I do not live a comfortable life, but it sure is interesting. 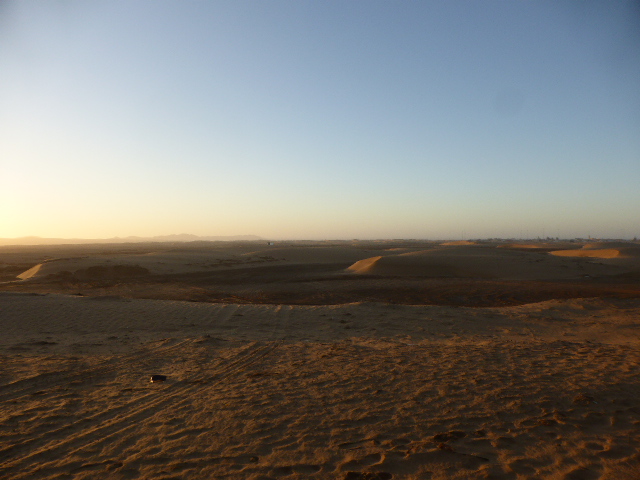 Coming into Walvis Bay in the morning. The left side of the car is a desert. 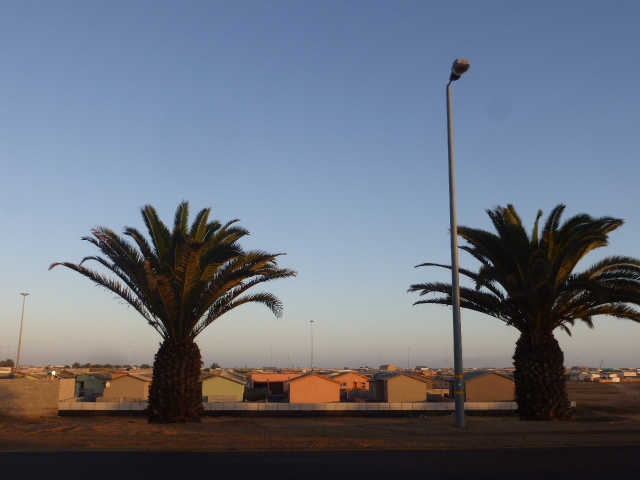 Walvis Bay, the right side of the car is a city.

$73.73 for a car! For three days!
I arrived in Walvis Bay at Loubser’s Bed and Breakfast at 07:00 and I called the man I had rented the car from so that he could come and pick it up so that it would not cost me another 350 Namibian dollars ($23.91)/day for having it.  I cleaned out the filthy car that I had spent about 23 hours a day of the past three days inside of, and the guy was there to pick it up before my scent had left.  I gave him the equivalent of $71.73 for the car.  $73.73  for a car!  For three days!  I had put 2,291 kilometers on it over the duration and for 2.5 of those days I bounced that car across gravel roads that were in no condition for a compact car.

Lala and Francois Loubser were awake at Loubser’s Bed and Breakfast when I arrived, so I sat at a table on their terrace and visited with them for a couple of hours before Lala sent me to bed.  I slept until noon, showered for the first time in three days, and went to the waterfront of Mola Mola to relax and try to enjoy the day.  When I got back to the hostel, Lala introduced me to a Canadian girl who had just moved in.  Lala is a wonderful woman.  She likes me a lot and she tries to set me up with all the single women who come through the bed and breakfast.  I could live here for a month and have quite a time it seems! 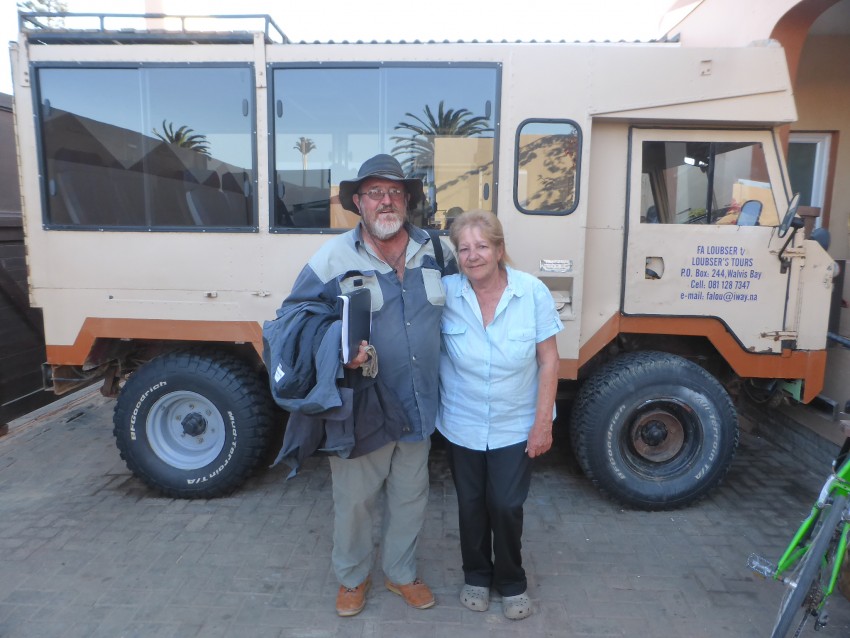 Francois and Lala Loubser. I love these people!

I got too busy to chase down mischief as I am in the market for a home in London and had three days of blog to try to catch up.  Living in a car for three days will really put you behind in life!

April 15
It is crazy how the subconscious works and what it sees.  I like to psychoanalyze.  If you read this blog with regularity (and I hope you do!) you are probably aware of that.  Today I was walking towards the center of town to go to the supermarket.  While walking down the center of the street, I was focusing on nothing.  I was mulling over things in my mind when my thought patterns changed and I was thinking about Mazda vehicles and who I know has owned one.  It was a pointless thought, but it was what suddenly started going through my mind.  When I took a moment to focus around me I noticed that the closest pick-up truck to me was a white Mazda with the name of the vehicle on the tail-gate facing me.  Now, I did not see that at all with my conscious eyes.  My subconscious did all of that.  It is crazy how that works.  No wonder subliminal messages work in advertising. 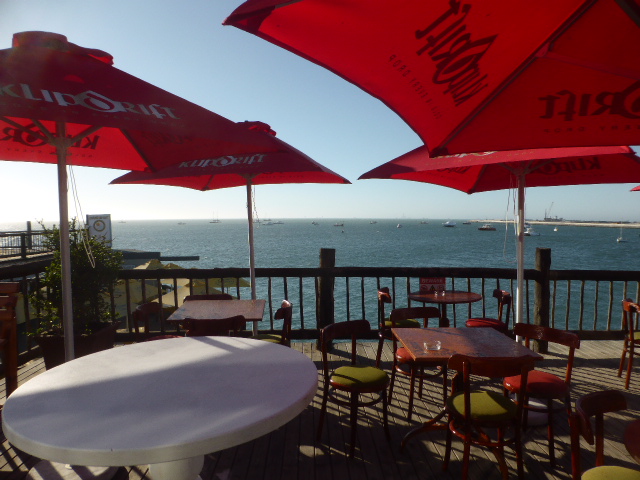 I have spent afternoons in worse places.

In a supermarket a local guy asked me where I am from.  I said, “I am from Canada but I mostly live in London, England.”  He asked, “Do you know Victoria Beckham?” as in, ‘Are you and her friends?’  Random!  It made me laugh. 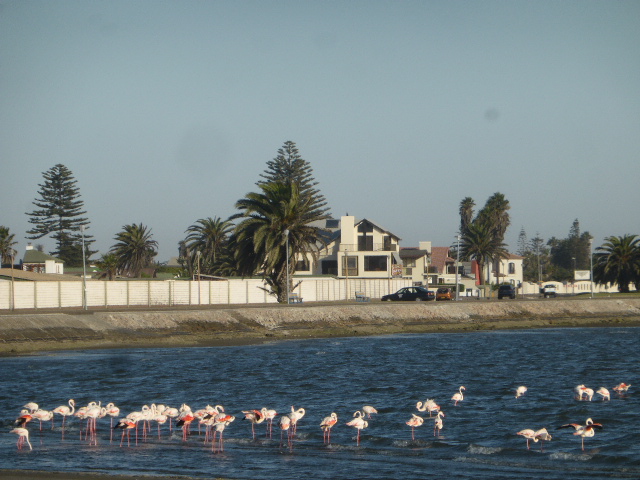 The flamingos in the lagoon of Walvis Bay.

I went out for some beer on the Walvis Bay waterfront.  I got to thinking about how I am in a Caucasian community in Namibia, but the white women are generally pretty unattractive.  One would think that after being in very traditional Africa for so many months and arriving here, I would find the women extremely compelling at this point.  This, however, is not the case at all.  I think that most of the girls in my small-town high-school graduating class are more attractive than what I have found here.  I have yet to see one head-turned in this town.  That is crazy.  I have seen a lot of ‘Well, I guess, if I had to…’s but I have yet to see one ‘Holy f-ing wow!’  This is a former German colony of remaining white people from that time.  And Germans always make ‘great everything’ from women to cars to beer and everything in between.  So, what has happened here?

I was sitting at a bar, having this discussion with a local black man at a bar called The Raft about this.  He was laughing, high-fived me, and said, “Ahh, the darker the berry the sweeter the juice!”

People are so awesome!

I found this book today on the waterfront. If Peter Stiff did not become a porn-star, he truly wasted possibly the greatest name ever!

“I had to call to Google today as I was having trouble with my account. When I spoke to an Indian man on the phone I was really polite to him and I could tell that he liked me because I was calm and not someone typically screaming at him. I was on the phone with him for about 15 minutes and then he asked if he could put me on hold for a couple of minutes. I said, “Sure.” He told me, “Go get a coffee and come back.” I said, “Nah, I just go on porn instead…” That made the poor guy super uncomfortable because he did not know if I was serious or not…”
— Google Operators...
[View All]