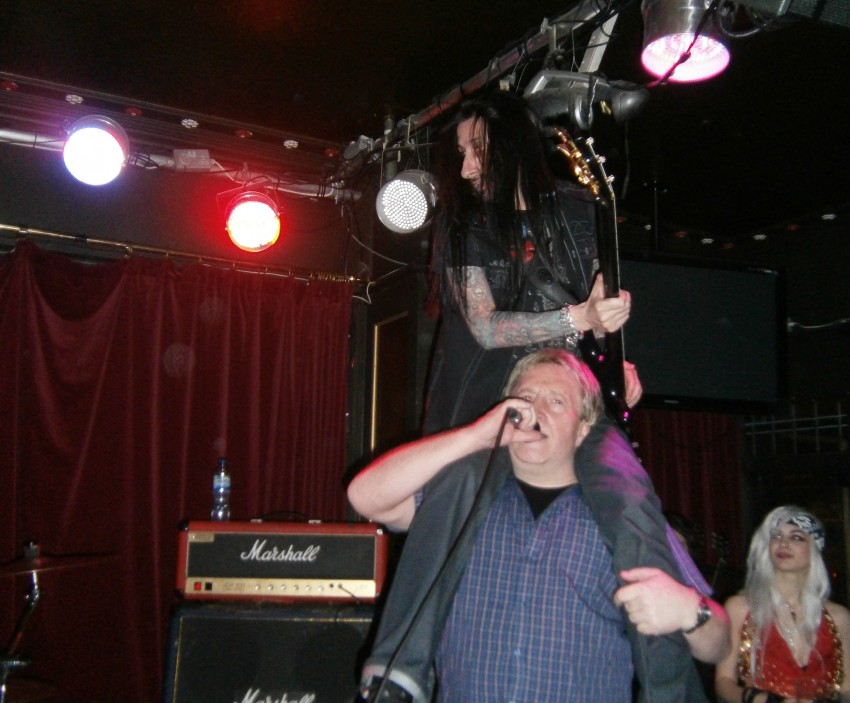 The Camden Monarch is musical art.  Unfortunately, not enough of this art is created anymore.  The potential loss of this culture and rock and roll is a sad future.

Sunday in Camden, London, England, is the most consistent best night of the week…in the world.  Now, that is a very strong and opinionated statement, but it certainly holds a lot of accuracy.  If you are looking for a good time, any and every Sunday of the year, you will find it in Camden.  It is London’s best night.  Sure there might be a fun special Sunday in Buenos Aries or in Tokyo or in Los Angeles or wherever you want to try to out-cool me, but Sunday Funday in Camden is the staple of a fantastic night 52 weeks a year!  You will have to put up a quite an argument to convince me that there is a city in the world with a consistent Sunday that does it as well as the one to be described here.  If you are ready to go on the journey, an itinerary and the answer to ‘why’ is as follows…

Get ready for an evening of awesome!

Try to arrive in Camden at about 19:00 on your Sunday and head to the Blues Kitchen to enjoy a beer.  It is important to get there early as the venue fills up in a hurry.  Find a stool at a table as close as you can get to the stage (directly in front is the absolute best).  Save a couple of stools around you for your friends that will probably be arriving late.  Tell everyone asking for the unoccupied stools that you have friends coming for them and apologize for being a stool hoarder.  If you are looking for the best blues jam session in all of London, which might make it the best blues jam session in the world, it kicks off at about 20:00 at the Blues Kitchen.

The show starts off with the house band that really wakes the building up and then the actual jam starts.  Get ready for guitar licks and raw voices putting it all on the line.  It would be good if Sunday was either the night for the Blues Kitchen or the night of the Camden Monarch, but unfortunately, they both kick ass on the same evening.  So, you will have to make choices.  If you are listening to me, which I guess you are, I will make those choices for you though.  You are probably already having a great time at The Kitchen, but unfortunately I am going to have to tell you that you will have to pry yourself away from there.  Trust me though, I totally know what I am doing.

I know…I know…it would be nice to stay where you are all night and it is guaranteed to be a good time, but there is a rock show about to start in the Monarch at 22:00 that is going to blow your flowing locks straight back.  Really…  As good as things are now, they are about to get even better.  You are going to have to give up something great for something that is amazing.  Life is hard, and it is easy to get comfortable with what you are enjoying, but believe me, as good as the ice-cream is that you are eating at the moment, moist chocolate cake with the best icing available is waiting for you.  The Camden Monarch is that cake and icing.  Walk uptown.  You had better get moving as you do not want to miss anything.  Come’on, we have to get going…  It is going to be wild. 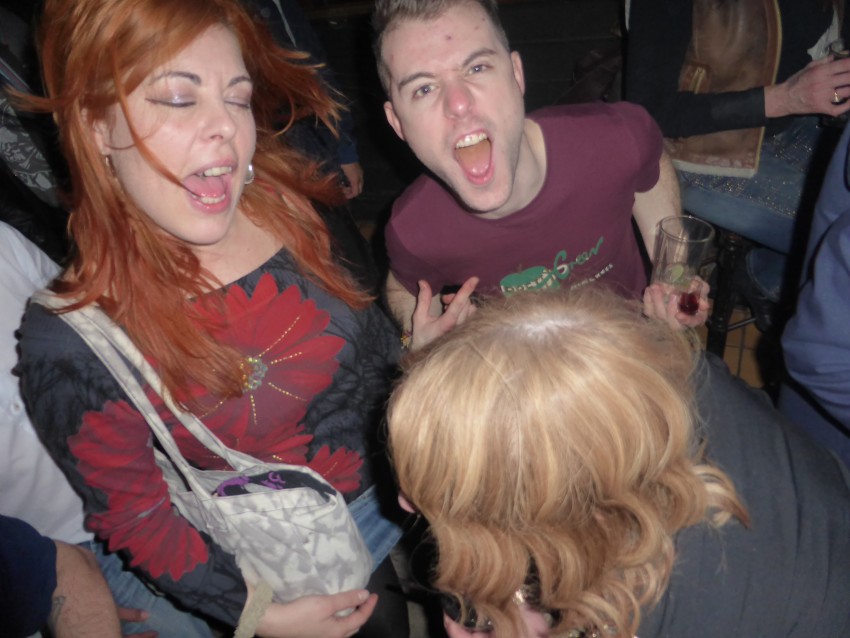 It is going cost you a £5 note to get into the Monarch.  It will be one of the best investments on fun that you will ever make…EVER!  It is a pleasure to bring first-timers in to watch their minds melt.  I enjoy it when I am flanked by someone who listens to pop music.  I like to show them what a rock show really is…

It seems like the first symptoms of a pop-lover’s weak mental musical barriers crumbling is a radiating glow and inability to put together complete sentences for sheer excitement at their newly opened doors of perception.
The Camden Monarch is four walls of intense rock and roll.  It is a small bar area, about 10 meters by 10 meters, and there is a low stage at the front.  Onstage are near rockstars, old rockstars, and those somewhere in the middle who are still after the dream.  One night Richie Faulkner from Judas Priest might be on stage for the night as a part of the band.  Maybe Matt Pearce of Voodoo Six is playing with a shine in his eye and his guitar extended straight out from his body.  You never know who is going to show up and blow the roof off the building with the band. 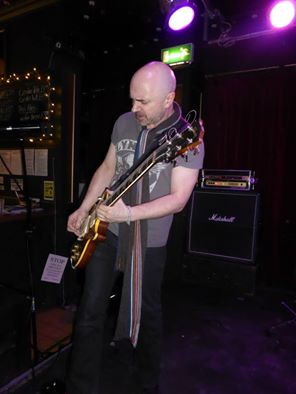 It is loud.  It is sweaty.  It is rock and roll.  It is different eras of metal.  It is alive.  It is Motörhead meets Guns ‘N Roses meets Led Zeppelin.  It is a ringing in your ears for two days after.  It is Smoke on the Water, followed by Breaking the Law, followed by Paranoid, followed by The Number of The Beast, followed by Symphony of Destruction, followed by Tie Your Mother Down, followed by White Wedding, followed by Highway to Hell…  It is awesome.  It is long haired rockers.  It is women in short dresses losing their minds while they are dancing.  It is a bar full of people completely absorbed into the music.  It is music that leaves you no choice as it just comes and takes you on an amazing metal journey with the people playing on the stage.  It is wavelengths of sound that will shake your clothing with no option for conversation, so you might as well rock out as fucking hard as you can.  It is getting close to front-center of the stage as it is the best place to feel the force.  It will be nothing but fun. 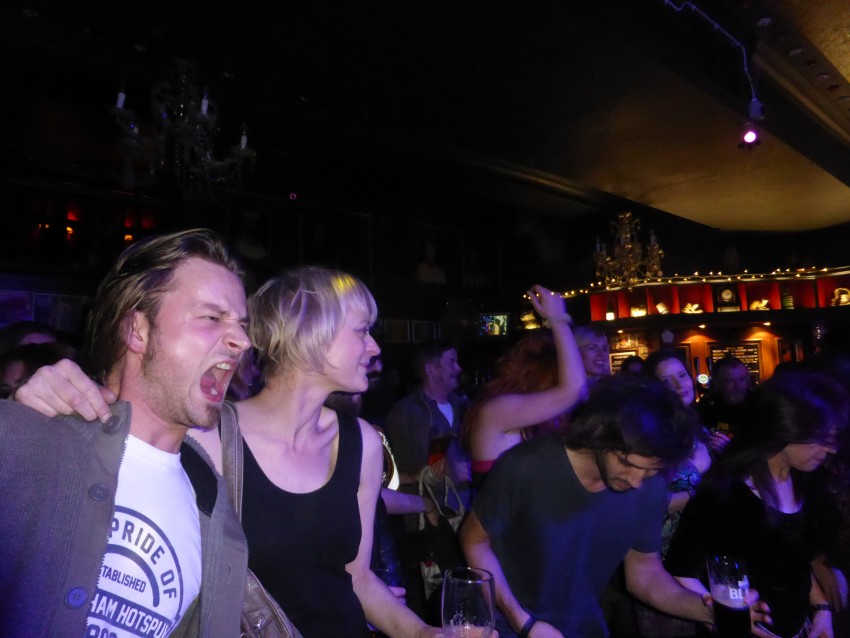 The Camden Monarch in London is a sub-culture in a city that overflows music.  The Monarch is the sweat of rock and roll.  Meet the men in leather vests with band patches sewn on them.  Meet the gorgeous blondes in red dresses who look like they just stepped out of an MTV video.  It is real music rather than the pop-garbage destroying your soul through the radio today.  The Monarch is there like a mother to embrace you and tell you that everything will be alright after you have just heard the worst things ever.  Something needs to save us from the direction the corporate musical industry is moving to milk us.  The world needs to spread more word about this bar because music needs more of this.  We are losing an art.  We are losing creativity.  We are losing this amazing sub-culture.  On each and every night of the Sabbath this venue will momentarily allow you to forget about the bubble-gum-machine musical hell that the masses have accepted and taken on without any real consideration of what they are actually consuming…

Go to the Camden Monarch in London on a Sunday night.  Rock out and feel the music.  Let the metal melodies of the Monarch discover you.  There will be some personal changes and you will never YouTube stream another Katy Perry song in your life.  Camden on a Sunday will show you a better path than what the tabloid magazines try to spoon-feed the populous about the music we are supposed to consume and think is cool.  This information that you have found right here is like discovering a treasure map specifically drawn up for your auditory senses.

When the show finishes, you leave the Camden Monarch with a ‘Volume 2’ ringing in your ears, messy hair, sweaty clothes, and smile and what you just experienced.

The Camden Monarch will completely rock your balls (or tits) off!

You will end up writing me four days later to tell me it was your best night in London.

Now go and get it!  You are going to have so much fun!

“Vinyl records are collectible and have great value, but my friend told me that what is happening is that records by artists like Elvis are depreciating because the next generation does not care about that kind of thing. The next generation may know the music, but they just want it digitally so that they do not have to carry the bulk of it around. Then as the generation of people who would collect things as Elvis records keep dying, there are less people who want it, and the value decreases. Interesting.”
— The Record Industry
[View All]