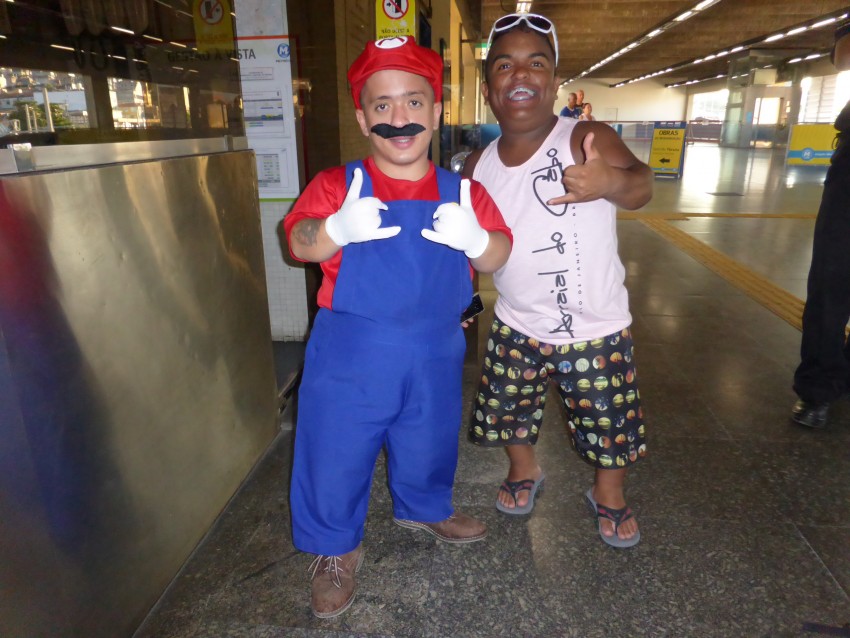 It rained like crazy all day.  When we had the door of the house open when a cockroach the size my pinkie finger decided to have a meander in.  So, we got the cat, who caught the cockroach in her mouth, and then we carried the cat outside.  The cat dropped the cockroach in the rain, and we picked up the cat and brought her back into the house.  Eyebrows is a great cat!

Rio de Janeiro Carnaval Parade E Samba Finale…
I wore swimming trunks and a rain jacket as the rain would not leave us alone.  We arrived at the Sambadrome, a purpose-build building for the main Rio de Janeiro Carnaval Parade.  It has a 700 meter long street between the grandstands and it seats 70,000 people.  On the way in, touts were trying to sell us or else buy our ‘Chickets’  We spent $97 for each ticket in advance.

…To try to describe what needs to be lived…

Well the Rio de Janeiro carnaval parade started with the first samba school, and there are about 3,500 costumed people in each school in each segment and there were six different schools to preform in the event.  That means there were about 21,000 people involved in the parade.  I need to stress that again…  21,000 people involved in the parade!  Here are some notes I made.
– Cannonball Man being shot from a cannon into a huge net, several times as the parade moved.
– Floats of rotating grand pianos with players riding with them high in the air.
– Topless girls dancing on floats.
– Huge floats, some at least 50 meters long.
– Beautiful elegant Brazilians in costume everywhere.
– Bubbles being released from the mouth of a gargoyles on one of the floats filling the air.
– Gorgeous almost naked women with huge feather angel wings, dancing samba so fast that you could hardly see their feet move.
– People riding huge fake snails pulling trees with people dancing on the roots.
– Everyone in the stands dancing together to the music.
– Topless women riding behind huge fake salivating wolves.
– Floats decorated with VW Beetle cars…

And that was just the first samba school.
There were five schools to follow in the Rio de Janeiro carnaval parade.  I tried to stop taking notes to just watched it, but there were things like…
– Guys spinning around on their heads and making six or more complete rotations on the tops of their skulls at once on a tiny wagon platform.
– A human fooseball table float, with humans dressed as opposing teams and strapped to metal bars across the float/table where they would make human fooseball rotations in unison, just as the table game in action looks.
– Colors beyond normal imagination.
– Yo-Yo artists with a Yo-Yo in each hand doing amazing tricks.
– Floats of ballerinas dancing together.
– People shooting smoke and confetti from their seemingly bare hands.
– A woman and a man strapped to their own 10 meter flexi-poles that they would spin on and throw themselves around like they were on the tops of giant car antennas, which would flex to the point where they would be at a 45 degree angle at times, and then fling back the other way.

We left the Sambadrome at 4:45am.  Go yourself one year.  Believe me, the Rio de Janeiro Carnaval Parade needs to be experienced.  It is one of the most amazing things of modern human creation on the earth.  Pictures to follow.

“In those bushes the people are mixing the sex. Other people come…chase away.  They leave clothes when…run away...”
— Tanzanian Misbehaving
[View All]