The Okavango Delta of Botswana

April 2
Getting up at 06:02 is not easy when you prefer to howl at the moon.  Once you are up, it is not so bad. Making that initial move to get yourself out of the warmth and comfort of a bed that you could surely use more time in…that is the tricky part.  I am certain we are too far into the future to have to wake so early anymore.

I was waiting at the reception of the Old Bridge Backpackers in Maun when I was told that my ride was ready to take me away.  I got in a truck to take me to the Okavango Delta to an area called Morutsha.  My driver said he had people to get to the airport so we were going to drive fast.  The faster, the better the adventure my friend!  We skipped across sandy paths through the Kalahari desert to an area where many mokero (traditional) longboats were pulled up the shore.  The mokoro boats used to be made out of wood, but today they are made out of fiberglass. 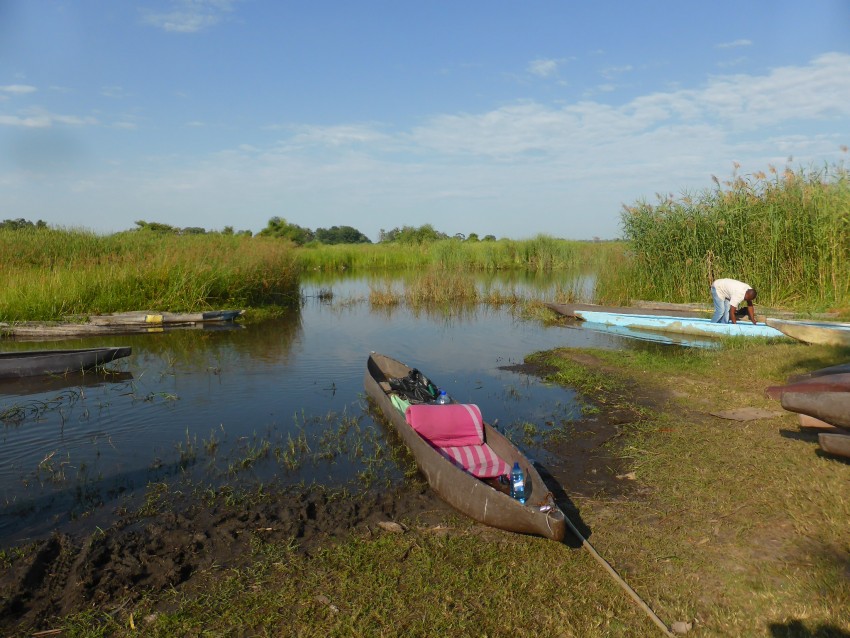 A friendly local man named Keinayang introduced himself and told me that he would be my guide.  We loaded a tent, a mattress, and a bundle of wood into the mokoro and Keinayang used a forked long-pole and took us out into the water.  We were off.

Keinayang poled us out through the delta through passageways that he called “Hippo Highways” which are paths through the water that the hippos travel at night in their pursuit of satisfying the munchies.  I love the term “Hippo Highway”… 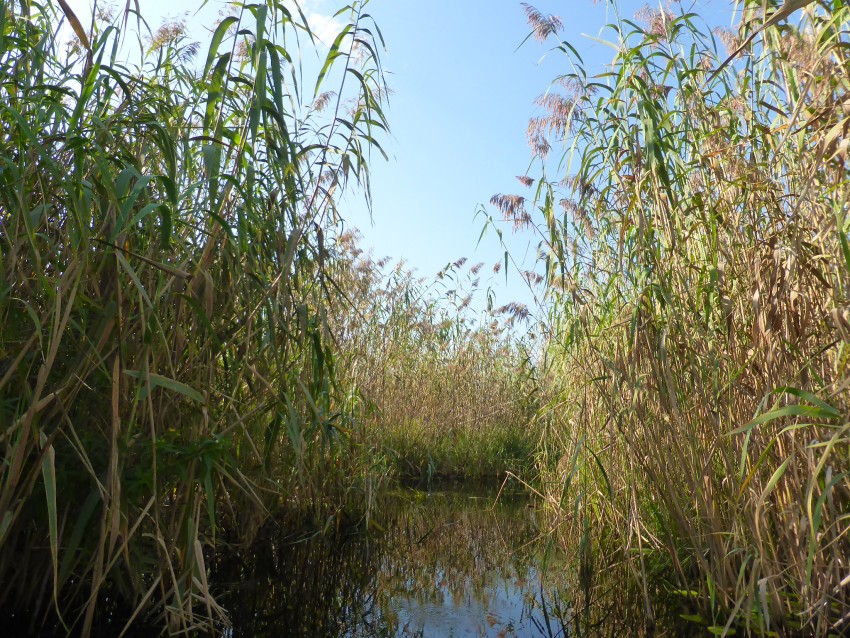 FYI – Hippos do not bend their legs when they walk, so they destroy more vegetation than they eat.

As we poled along, we passed several hippos in the water of the Okavango Delta with only their nostrils showing above the water level.  Sometimes when they would see us, a hippo would snort and move up and down to intimidate us.  I was not scared!  Not at that distance…  Though there was no telling how loud I could pierce the air in yells of fear if they were right next to the boat doing the same thing…  Keinayang told me, “I try give hippo better distance, so that he won’t get nervous.”  That works for me too Keinayang… 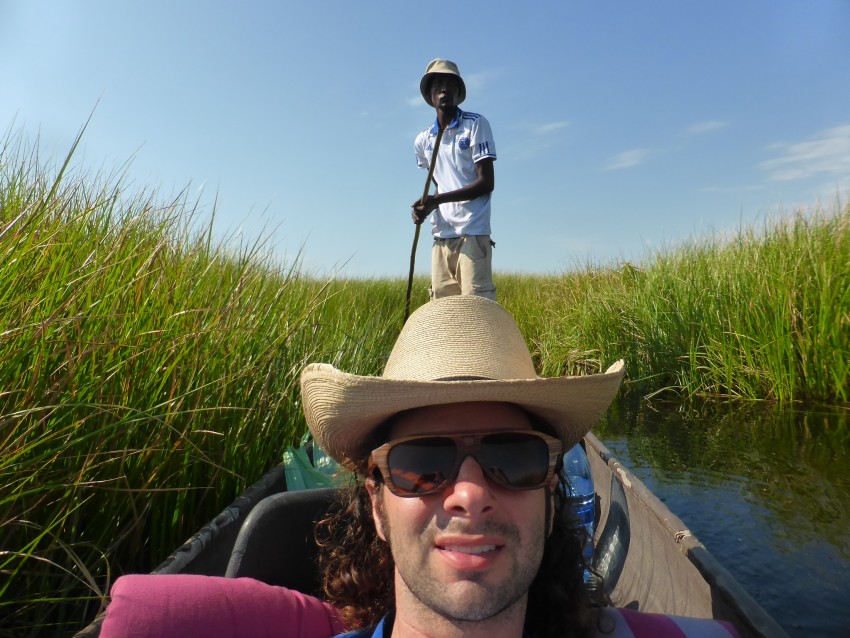 Keinayang poling to get us through the Okavango Delta.

A young hippo might get attacked by lions, but the only enemy a full grown hippo has is the human.
We arrived and in came as a couple who has spent the previous night was packing up.  They befriended me and gave me a porcupine quill that is about 25 cm long.  I put it in my cowboy hat.  As they left, Keinayang and I were left alone.  I asked him if he was nervous to be left alone with me on the island.  He said he was not.  I said, “Okay, but there will be no one to hear you scream.”  Keinayang did not seem to be intimidated.  That is understandable.

When the sun was not so hot in the late afternoon, Keinayang guided me on a two hour walk around the island to see what we could spot for animals.  He told me that there are three keystones of the Okavango Delta: the elephant, the hippo, and the termite.

– The elephant travels and only digests 60% of what it eats.  The rest passes though the animal and much of it re-germinates where it lands (palms, grasses…).
– The hippo is in a similar situation to the elephant where the mobility of the animal transplants much of the vegetation that passes through the animal to different places and begins growth in other parts of the delta.
– The termite builds giant hills, some that I witnessed of at least 4 meters high.  Baboons and other animals climb the termite hills that they use as a lookout point.  Birds use the hills to land on.  The dung left behind often contains seeds and those seeds perhaps turn into bushes or trees that stabilize and eventually expand the delta though evolution.

Nature is a fascinating cycle.  The Okavango Delta is the result of strategically placed dung! 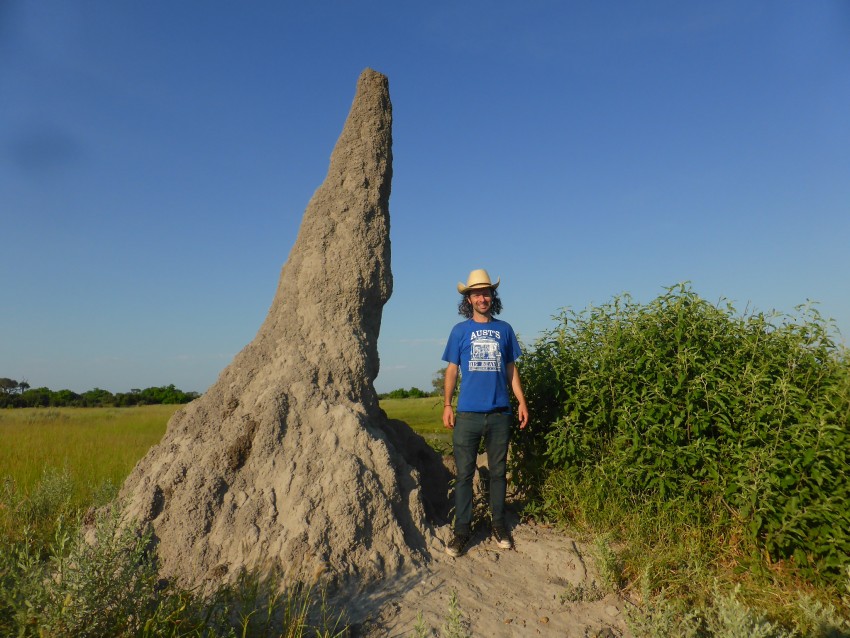 Look at the size of that termite mound. West Side!

Termites are fascinating insects.  They live in monarchies where a king and a queen are in charge of the entire operation of the mound.  There are worker termites and there are soldier termites.  Termites hate the sunlight, so they cover things such as logs in a mixture of sand and saliva during the evenings that hardens over the next day.  They can then remain below the pasted sand so that they can work to break down the wood during the sunlight hours.  That same termite sand and saliva is what local people use to build their houses from.  It is important that they take the termite hill of an extinct colony, or else they will have a problem with termites in their house.  I am amazed at the ingenuity of humans using something processed by insects to make their homes.

For Even More Information – Termite hills are indicative of direction because they always slope to the west due to their desire to hide from the sunlight.  They can get you out of a jam if you are lost in the delta.  Keinayang called the termite mounds, “our mountains.”

In the evening back at the camp, I had some buns and some beans that I heated on the fire and shared with Kienayang.  We smoked my pipe and my tobacco after the meal to bond.  My friend referred to the fire as “bush television” as we stared at the flames until it was time to go to bed.

I did not have a blanket, but Keinayang had a large towel that he loaned to me to keep warm for the night.  Outside of the tent, the hippos around us were snorting and making noise to announce their presence. 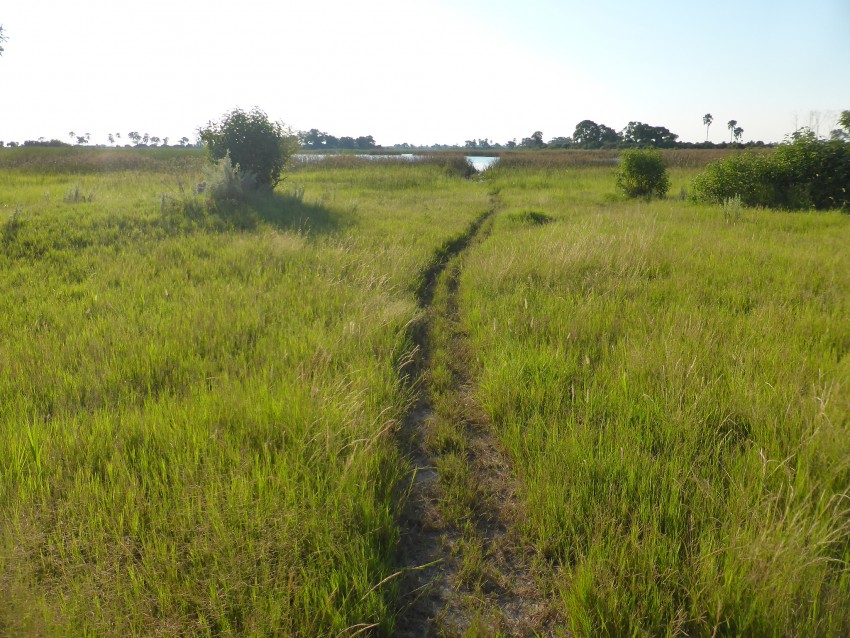 April 3
The hippos came through the camp at night, but they could not be fussed with us.  I was up at 06:02 again to get ready for a morning nature walk to see what other animals were in the area.  Keinayang and I had a make-shift breakfast and headed off to see what we could see.

In no time, we came across a reedbuck that had been hiding in the grass.  It let out a sort of scream of warning as it bounded off.  Then, somehow we snuck up on a herd of wildebeest.  The wildebeest scout, who was closest to us was surprised to see us when we were so close to him.  He let out a snort to inform the others, but we were so close and he was so surprised that it made Keinayang laugh, who said, “Still sleeping.”  He laughed again and told me, “Because at night….whooo.”  Lion bait! 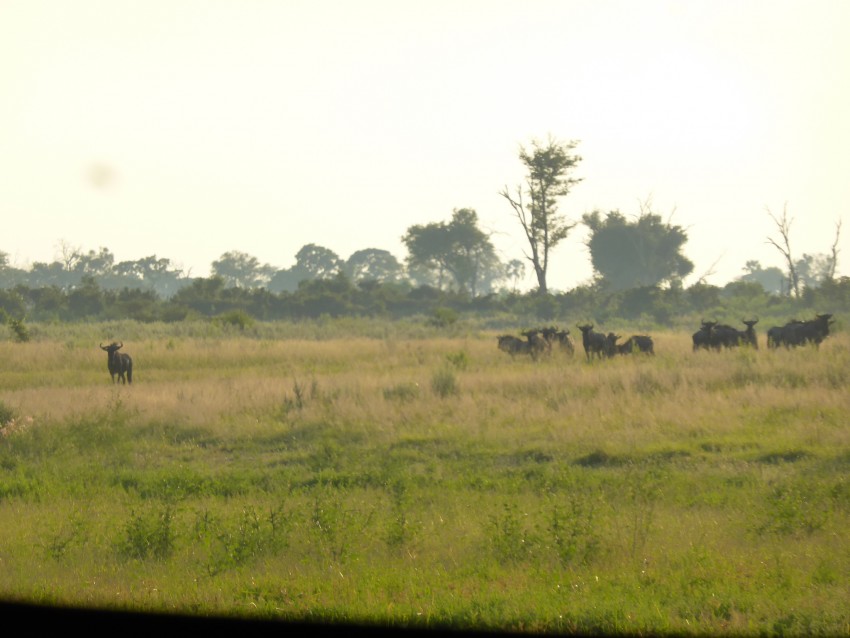 Tell the others we are here!

A giraffe, this massive animal, poops pebbles like a rabbit.  Strange…
We came across some more giraffes that are just cool and gentle creatures.  My guide told me that he likes them because they never charge and they never cause problems.  According to Keinayang, a male can be 6.5 meters tall and females can be 5.5 meters tall.   This works well in nature because they can browse (a term for their eating from bushes they can see over top of) together and there is no competition for food.  Ask your favorite giraffe lady out on a dinner date and split the meals! 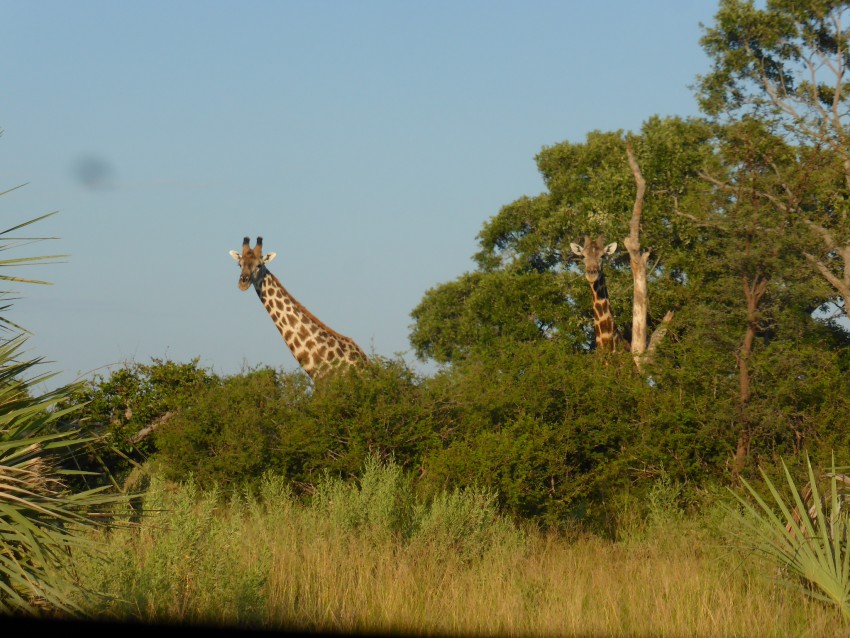 This is probably a date we were crashing.

Also, there were zebras and warthogs around.  Warthogs enter their dens backwards so that anything coming to attack them will be met with their tusks, but the most interesting thing I learned is that when they leave their den they charge out, just in case something like a lion or a leopard has been waiting patiently for them to exit their den to make a meal out of them.  Nature is so interesting.

We headed back to our camp once the heat of the day came to take over for the afternoon.  I had some time to read and just relax, a rarity in my life.  I have been carrying the same book with me for nearly four months, and for the first time in about 3.5 of those months, I read 50 pages of it.  It was so nice to be on the delta to just shut down and turn off for a bit.  The life of luxury…to be away from the technology that is supposed to make our lives easier.

At 13:00, we packed up our camping gear and headed back through the hippo highways to where a truck was waiting to take a girl, who had been on a similar adventure, and I back to civilization.  It was nice to be away from it all.  It was nice to feel so liberated.  But it is a shame that a man craves access to the internet and that is what he thinks about on the way back to town from the bush.  What is happening to us as a population?  Yikes… 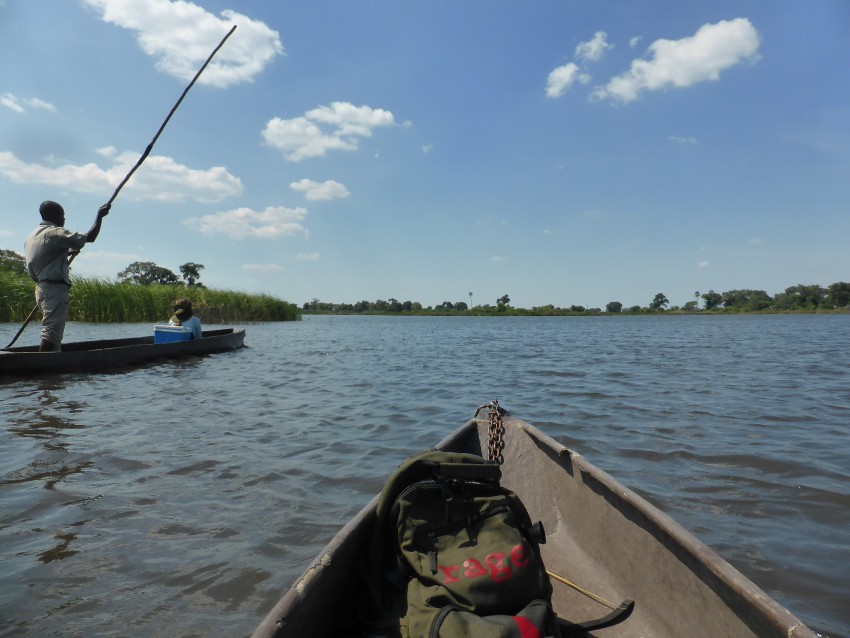 Poling life on the Okavango Delta.

If you ever really want to get away from it all for a while, and walk amongst giraffes, zebras, wildebeest, hippos and warthogs, go to the Okavango Delta for a couple of days.  Spend a week.  Enjoy the liberation.  Come to Maun and stop at the Old Bridge Backpackers.  They know good people to sort out your freedom! 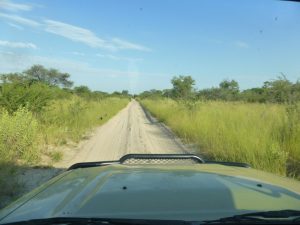 The fast drive to the Okavango Delta. 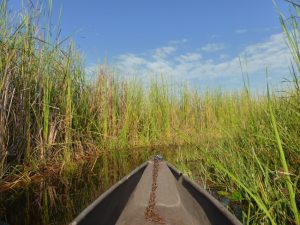 Travelling down the hippo highways. 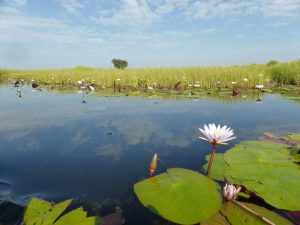 Lilly pads. Makes you want to be a frog. 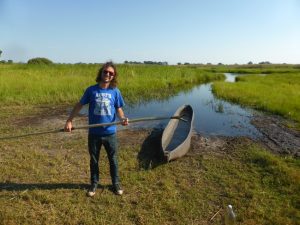 Trying another man’s pole is not my thing, but this one had a fork on it. 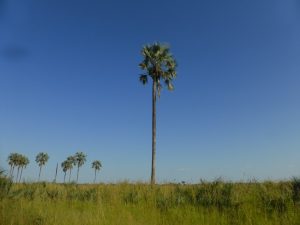 Palms, elephant dung planted. The elephants eat the fruit at the top. They put their head against the palm and wrap their trunk around it and then give it a shove and the coconuts from the top fall down for them to eat. 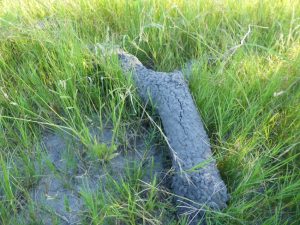 Sand covered log with termites inside having a heyday! 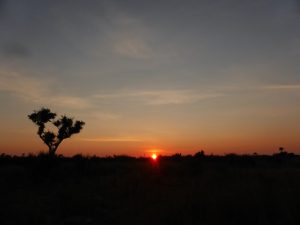 Sunset on the delta. 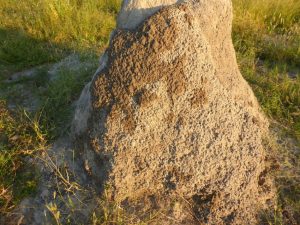 The wet sand and saliva is termite work from the evening. 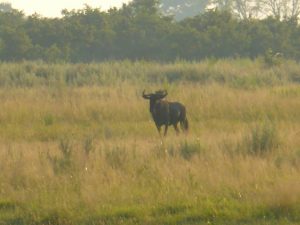 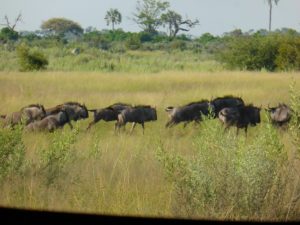 Stretching out on the run. 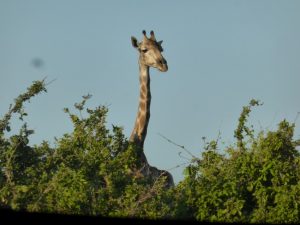 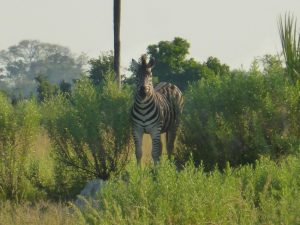 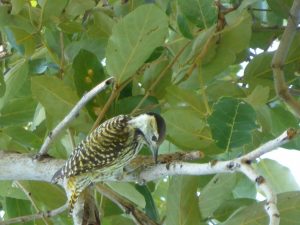 A woodpecker. He kept me awake from an afternoon nap. 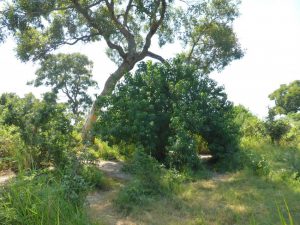 Our camping area at Morutsha in the Okavango Delta. 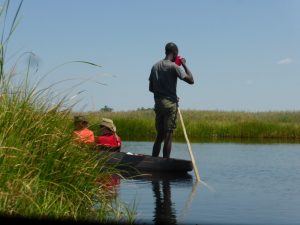 The local guides drink water from the delta that they simply scoop up in cups. 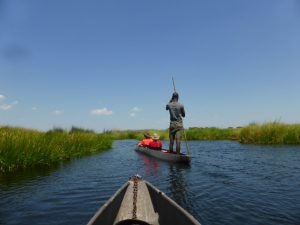 The race that we were not really involved in that we won anyhow.

“The currency in Uganda changed some years ago.  They introduced new bills in the country and the banks collected all of the old notes.  Then, politicians got their hands on the old notes and took them to the poorer communities where they gave the money away to families for votes in their favor.  That is pretty sneaky and very shady.  Of course, that added twice as much currency in circulation and as a result it completely devalued the Ugandan shilling.”
— Life in Uganda
[View All]