Gaborone to Maun: Being Botswana Homeless

March 30
I have not had a towel for a little over a week now and I have been looking for one to buy or waiting for one to steal from a hotel or hostel that I did not like.  This morning that ship came in.The guesthouse I ended up in last night was far too expensive. The girl, who was preparing breakfast this morning, was miserable and incapable of smiling.  That was enough to justify it.  New towel!

I know it is bad karma, but when you are overpriced and miserable, that should nearly bring my bad move to evens.  It is tough to start your morning with a jump in your step when your associates around you are dejected.

So, I left the guesthouse sort of unhappy myself, though I had made a major gain in life of a future no longer needing to drip dry my hair. 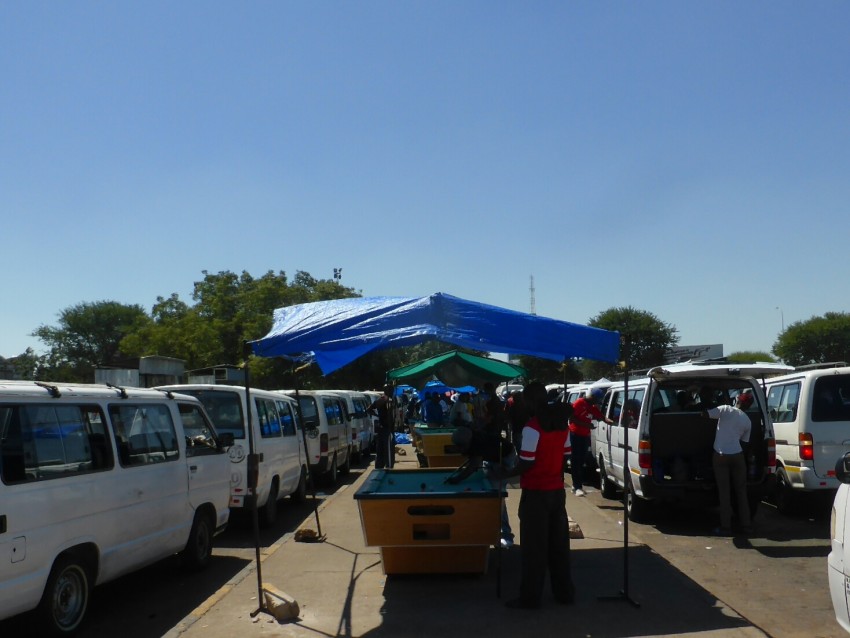 Playing pool under tarps at the bus station in Gaborone.

However, everyone I met through the morning was nothing sort of wonderful which perked me up.  Botswana seems to be a country of genuinely nice people.  I read today that the government dedicates 30% of its budget to education, which is the highest such number in the world.  That is fantastic…

One never hears the word AIDS anymore.  It is always HIV.  I am aware of how it works and HIV leads to AIDS, but when I was a kid, everyone was afraid of AIDS.  Now, the fear is HIV.  No one even thought about HIV when I was young.  This must be good news.  To me this means that science has reasonable of control of HIV now and medication keeps it in such a stage to prevent it from turning into AIDS.  This is purely speculation, but I was thinking about the difference of these two acronyms today and how they have seemed to change in usage over 25 years.

I got to the bus station and caught a 148 pula ($13.56) bus to Ghanzi, which is a city in the middle of the western part of the country.  The landscape just outside of Gaborone stays nearly the same for the entire drive as you pass though the Kalahari dessert.  There are small villages along the way through the barren land and not much else.  There is no mobile phone coverage for most of it and the bus driver has to keep his wits about him as he brakes and swerves around so many cattle and donkeys that seem to be under the impression that the highway is theirs for lounging. 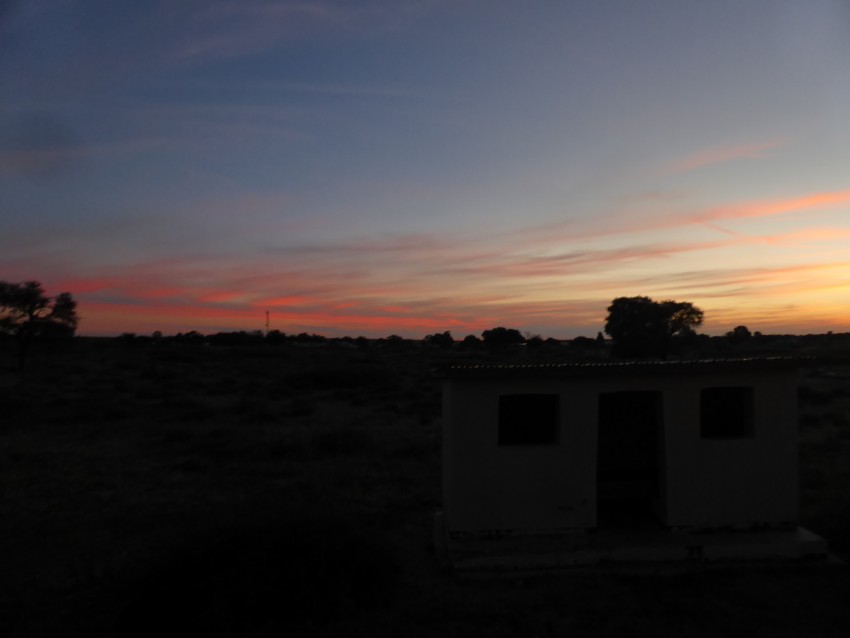 Sunset over the Kalahari Desert.

When the bus arrived in Ghanzi at 22:30, I asked the female bus conductor where I could find a cheap guesthouse in the town.  She put me in a vehicle with a local and sent me to a place on the outskirts of town, next to the prison, about one kilometer from the center where the bus had dropped me off.  As I approached the guesthouse, an older man came out to greet me and told me that he had a room.  It was just 570 pula ($52).  I told the man that had driven me there that I would sleep outside before I would spend $52 on a bed…

I will not last long in Botswana with prices like that…

The gentleman who had driven me to the guesthouse offered to drive me back to town.  I told him I would be alright and that I was going to try to catch the first bus out of town in the morning, so I had some time to kill.  He told me there was a 24 hour gas station where I could go and hang out.  I ventured in the direction we had driven from. 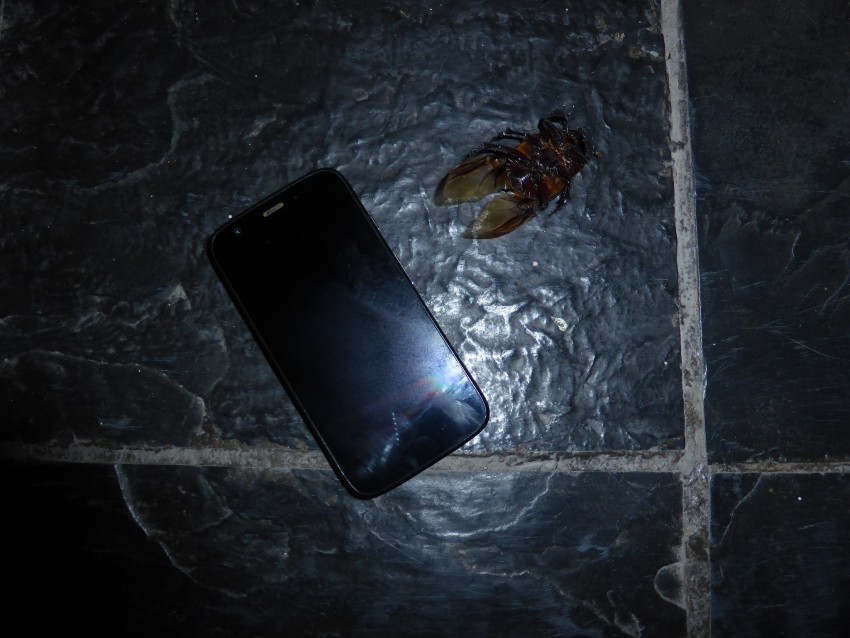 My first dung-beetle sighting. Look at him in comparison to my phone! He flew into a window beside me so hard that I was sure it was a bird.

Well, it was nearing midnight by this point and there was no place in town that was open where I could go to have a beer to kill some time.  I had no choice but to go to the gas station to hang out.  Luckily, one of the coolest people I have met in Africa was working the night shift.  If you are ever stuck in Ghanzi, Botswana overnight, hopefully Andreas is working the graveyard shift at Engen petrol station.  The man just has a great demeanor to him.  He told me that nearly every night, he has company in the form of someone waiting for the bus.  The good news was that he said a bus to take me to Maun was supposed to arrive at 03:00, though it was unreliable.  Well, 03:00 was better than the 05:00 that I was expecting. 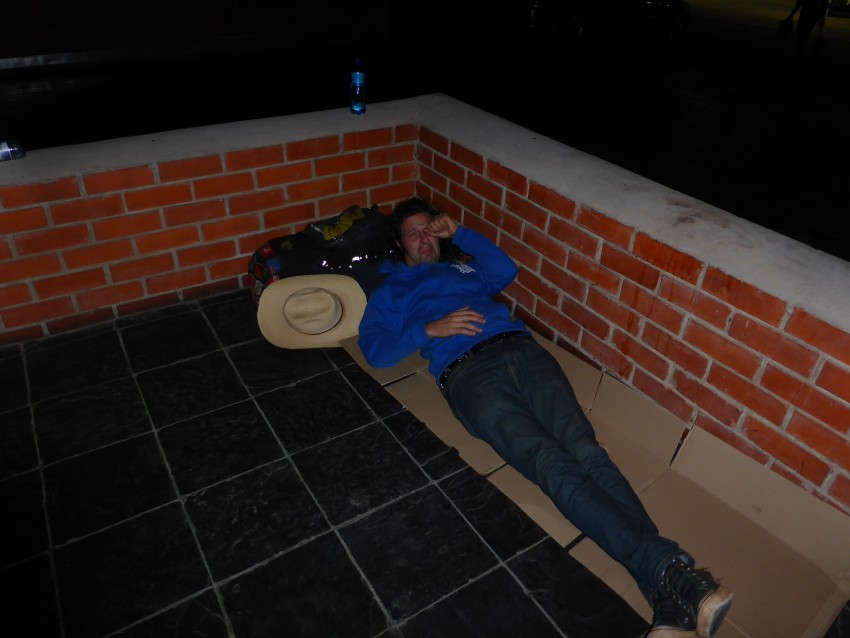 Being Botswana homeless in Ghanzi. .

I was really tired and I could not chat much more.  Andreas and I were sitting at the tables in front of the fuel station, and he told me to just sleep there, but I wanted to lay down in the grass.  I would have done just that, but Andreas mentioned snakes.  Insects snuggling up with my body heat, I can handle, but snakes are much less appealing.  So, I would have to resort to a short nap in the parking lot somewhere instead.  I asked Andreas if he had any cardboard.  He grabbed me a large box that we tore open and folded out.  We found a nice little place for me to set it out and I had a really nice “homeless” resting place for the evening.  I was asleep in minutes.

I had a really nice “homeless” resting place for the evening.
When I awoke to the sound of a diesel engine, I checked my phone and it was 03:37.  I looked over the edge of my corner of my Botswana homeless napping area and there was a white bus in the parking lot of the fuel station.  I quickly gathered up my cardboard bed to clean up the area, put on my backpack and headed towards the business of the parking lot.  I found Andreas and asked him if it was the bus I needed.  He said it was not and that it was a government bus.  Mine would be coming later.  Dang…

I was in the public toilets when a woman came into the men’s to use it as the women’s was full.  She was very friendly to me…too friendly in fact as she was going into the bathroom stall and told me to wait for her.  I did not feel the need to do so and went out to talk to some of the others from the bus to see where they were going.  A woman told me, “Maun.”  Hmmm!  So, I went and stood by the door of the bus to wait for the driver to ask him if I could catch a ride.

But before the driver arrived, a really big Botswanan woman approached me by the side of the bus and asked me where I was going.  “Maun.”  “Us too.  Come on!”  She grabbed me by the hand and took me with her on the bus.  She pointed out a seat she told me to sit in and to relax.  Everyone else loaded onto the bus, the music cranked up, and we set off. 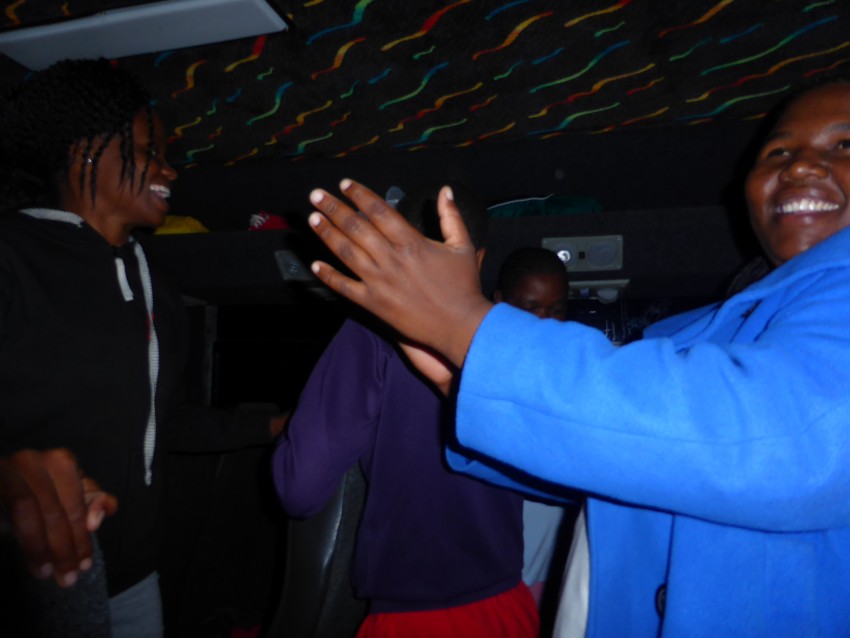 Sometimes you have to be homeless in Ghanzi for a night to get picked up by a party bus!

Well, sometimes you need to be homeless in Botswana for an evening and sleep on a cardboard box for three hours to end up with a free ride on a government bus full of women dancing and partying for the entire drive.  It was nothing but fun on the bus.  I tried to sleep a little, but those women were having a great time dancing and singing in the aisles that not much rest was to be had.

Everyone was so friendly and just so happy.  At about 06:00, we arrived in Maun.  By then, I had developed a crush on one of the women, who gave me her phone number, and the big girl who had brought me aboard was requesting mine.  They dropped me in town at a taxi rank.  I tracked down breakfast, a 150 pula ($13) tent-room at a place called Motsebe Backpackers and went to sleep around 08:00.

There is always something expected around every corner in Africa…Always…

The guy came on the bus selling biltong (southern African for beef jerky). The biltong came with a toothpick to clean your teeth after and a breath mint to freshen up. So smart, so great! 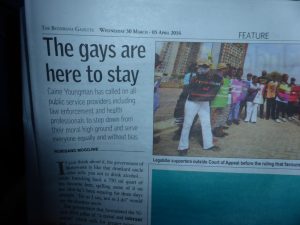 What a headline… Funny! 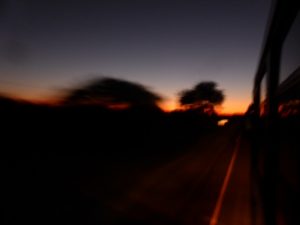 The sunrise. I do not think there have been many nights where I have photographed the sunset and the sunrise in the same day. 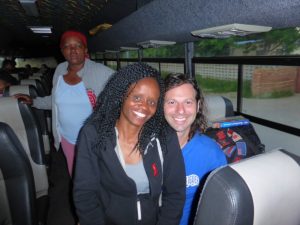 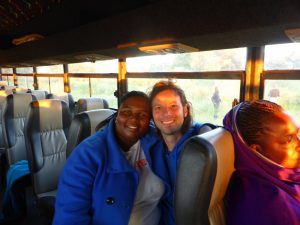 “I had to walk through a gate where a Zambian Immigration officer checked my passport to see if I had an exit stamp before I went into no-man’s land towards Zimbabwe.  A huge baboon had been walking beside me and he kept on going through the gate without stopping.  I asked the officer why the baboon had more rights than me and did not have to show his passport.  The officer had no idea what I was asking him…”
— Zambian/Zimbabwe Immigration Exemption
[View All]