Maun to Shakawe: Sleeping on a Taxi Drivers’ Floor

April 4
I checked out of the Old Bridge Backpackers this morning and decided to get out of Botswana.  I made it to the bus station and trying to find a bus to Shakawe, a border town with Namibia on the Botswana side.  Two lovely local ladies walked me to the right bus.  It would be a seven hour journey.  I got a front seat so that I could see out the window as we drove. 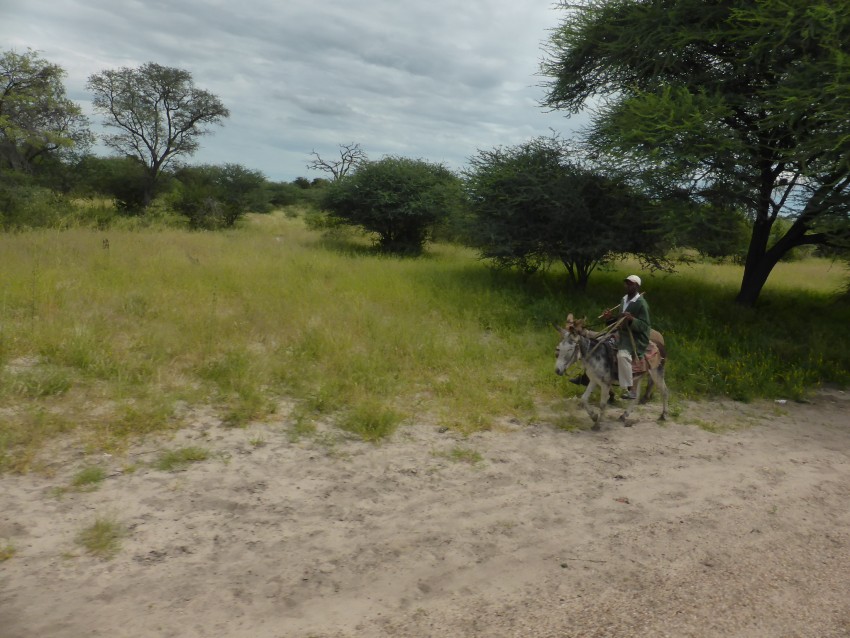 Along the road in Botswana.

Botswana is very dry right now.  They say the rains were supposed to come in November and they are just coming little by little now.  It is said that the dryness has killed many animals.

Along the roadside are a lot of cattle, donkeys, and even wild ostrich couples heading somewhere together. 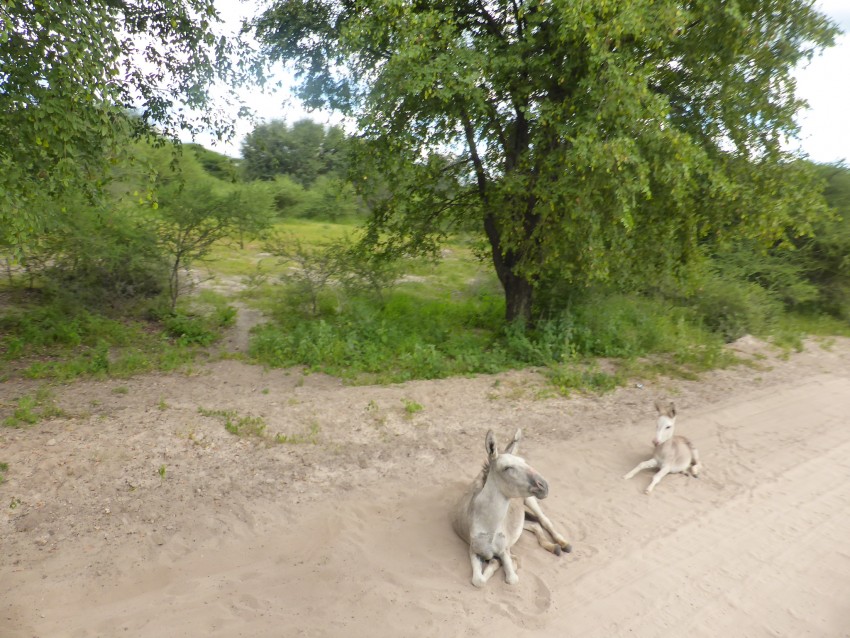 The bus drove for about two hours and we stopped at a “Hoof and Mouth Disease Check-Point”, where a policeman got on the bus to do a headcount.  He looked at me and said with a big smile, “Hello gentleman.  How is your journey?”  He was so friendly.  He walked through the bus, and when he got to the front again, he announced to me and the conductor lady, “This bus has 88 passengers on it.  This woman had told me it only has 68 people on it.  This woman has failed her mathematics!”  He did not seem to care though as he got off the bus again in a great mood. 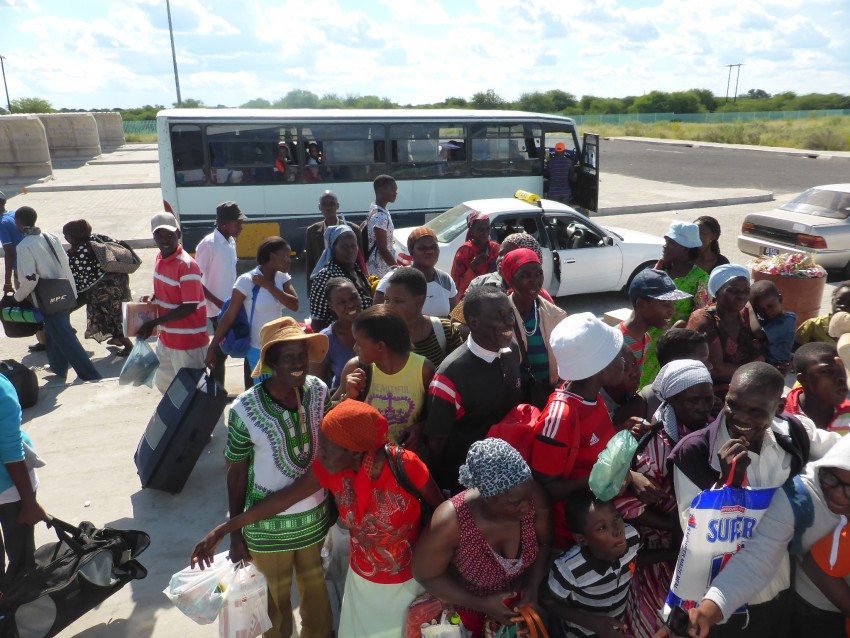 The battle to get on the bus in the villages.

Once we were on the road again, the bus really began to fill up.  The conductor really started piling passengers on, and the aisles were squished with humans like they were in a mosh pit.  The number on the bus must have been 130 by that point.  It was crazy on there.  I was so happy that I had a seat against a window and that the crowd was not pushed up against me and I was not crotch to ass with anyone else.

The ‘x’ in Botswana is a tongue click noise.  The name Nicole in Botswanan is “Nixolo” which has a click and something of a swallow in the name.
When I finally arrived in Sakawe, Botswana, at 18:19, I found out that the border to cross into Namibia had closed at 18:00.  I did not know what to do so I was just hanging out in the parking lot of the supermarket, having a snack and contemplating what my next move would be.  I was probably there for about 45 minutes when a local man named Andy approached me and asked me what I was doing and where I was going.  I told him that I wanted to get to Namibia and that I was too late for the border.  I said I needed a place to stay.  He said that there were guesthouses in town for 375 pula ($34.60).  I told him that was far too expensive for me.  He had good energy so I asked him if he had a place for me to stay at his house and I would just give him 100 pula ($8.87).  He thought about it for a second and said he did.  Really?  Yep.  Okay.  Let’s go… 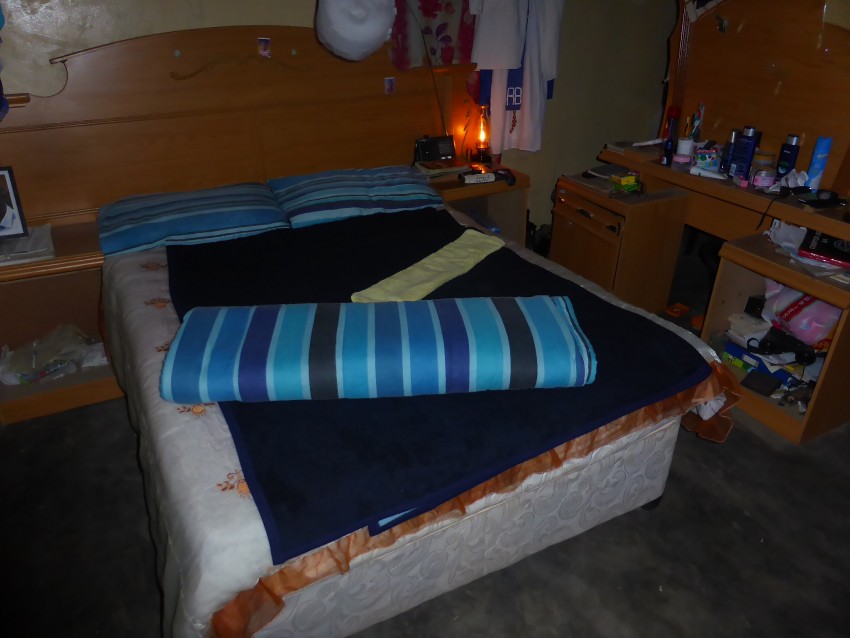 Andy’s house. His wife and kids are in another town and this is the tight-ship of bed making he operates every day.

So, I jumped into Andy’s taxi who said he was finished with work for the evening and we drove out of town into the countryside towards to Mohembo village border crossing.  He told me along the way that he did not have electricity.  I did not care.  All I wanted was a roof and walls to hide from the mosquitoes.  We drove about 7 kilometers from town and we drove into a small village with three or four houses.  I was glad to see that we were not alone, but I had a good feeling from Andy.

When we got to his house, Andy lived in a tiny shack that had the kitchen and bedroom as one.  It was very clean.  There was a double-bed to the side, a propane stove on the other, a small table, some dishes, a couple of wash-basins, and a mattress on the floor.  Andy asked me if I wanted the mattress or the bed.  I told him the mattress would be good enough for me! 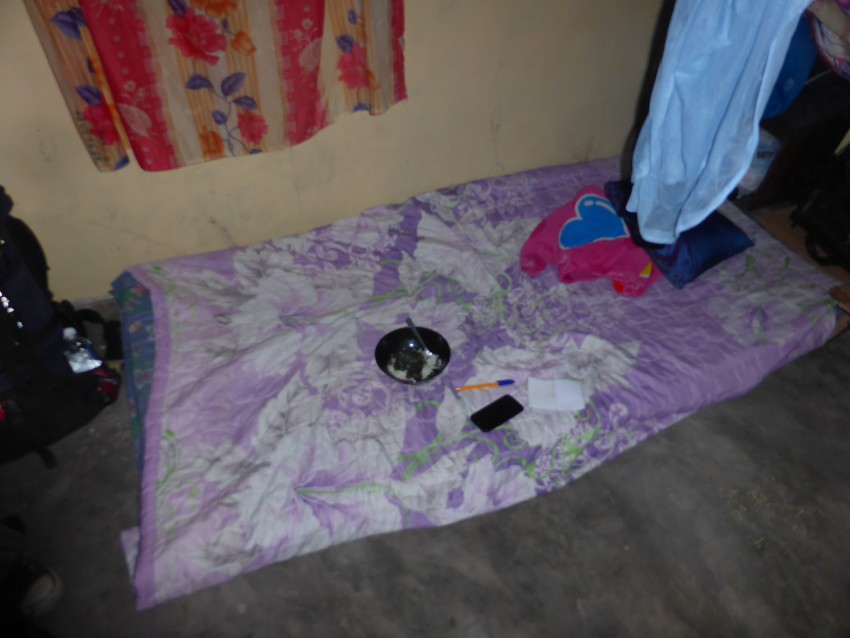 My mattress and prepared dinner. Andy is a nice human!

Well, it turned out that Andy is very well travelled for an African.  He has been all over southern Africa from Zanzibar all of the way to the bottom of South Africa and through everything in between.  He cooked us dinner as we were chatting.  It was incredible.  He was just a really good man who took care of me for the night…

Wow, there are great people out there. 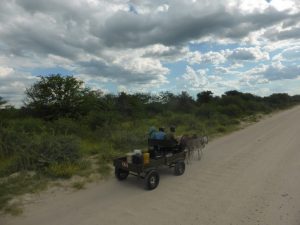 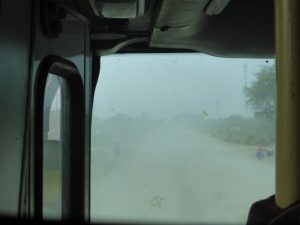 The road as we drove through the dust storm.

“She arrived and met me on the road at the highway. I welcomed her to Big Beaver. She looked at me with no beard and no mustache. She cocked her head, studying me and said, “You look different...” I said, “Handsome, hey? I like that you got to know me when I had a beard and then a terrible mustache, so you got to know my personality before you got to see how handsome I am. I am so tired of being treated like a piece of meat... Now, finally, after getting to know what is inside of me you get to see the real outside!” That made her laugh.”
— Newly-Handsome Non-Stranger
[View All]