Mbulu: Defensive Driving and Operating a Knife.
Jan 6
The way they drive in Tanzania… it is truly amazing.  It is a developing country thing…  If I were to try to explain what is in each driver’s mind it would be, ‘I drive fast and I have no idea what I am doing.  I am going to honk my horn when I make any moves so that you can be prepared for whatever I am doing that I should not be doing.’  “HONK!”  ‘A good… you saw me and got your vehicle out of the way…’

But everyone is ready for it here.  People automatically practice Defensive Driving in anticipation of anything and everything happening.  If I drove a vehicle like that in Europe or North America it would mean death.  People at home would not know how to react to a situation where they came over a hill and two cars were coming towards them, one of the vehicles in their lane.  They would not be ready for Defensive Driving.  An accident and likely death would occur.  But here, everyone is ready for it all of them time.  So, they survive it.  Defensive Driving works.  It is lunacy to drive here, but it works… 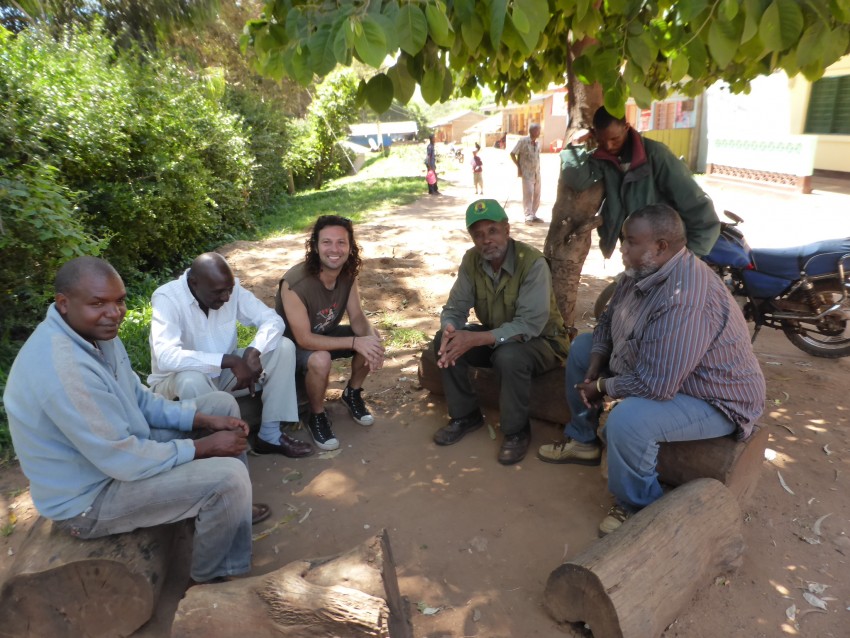 The elders having a discussion under a tree about how to locate a hunter/gatherer tribe for me.

I went to meet up with Paulo today and spent the day hanging out with him.  Paulo and I started making arrangements to go and see the Hadza tribe of hunter/gatherers tomorrow, somewhere in the mountains two hours away from here.  He had a discussion with a group of the other elders in town about the best way to get me there.

Paulo tried to show me how to cut up my local food with a knife.  I am not from here, but I am also not from the moon.  Honestly, I know how to operate a fork and a knife.  The food may be new to me, but the operation of eating it is something I am quite familiar with…
On the way to Paulo’s he pointed out a place where there was clothing on top of some isolated bushes.  He said, “In those bushes the people are mixing the sex. Other people come…chase away.  They leave clothes when…run away.” 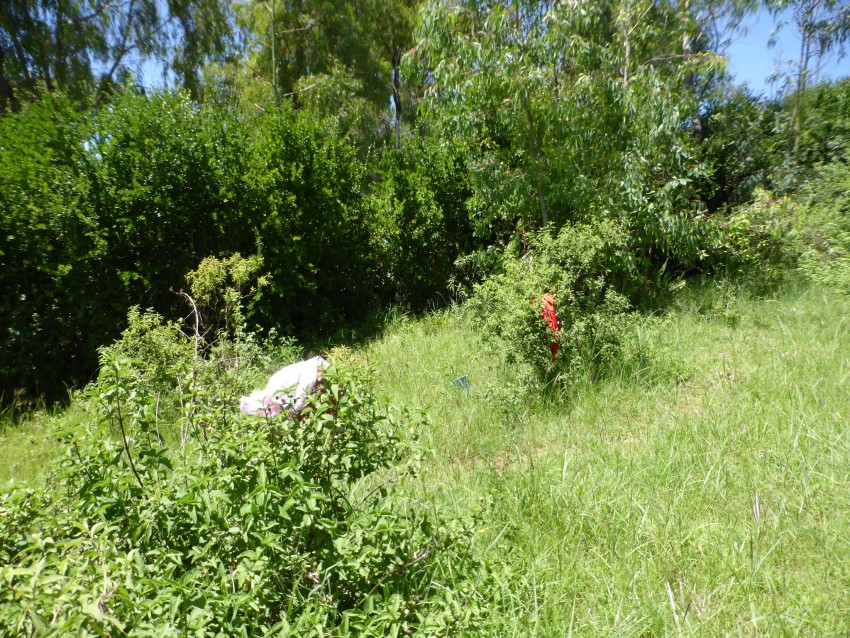 “In those bushes the people are mixing the sex. People come and chase away. The leave their clothes when run away.”

The Mbulu way of saying ‘Thank you’ in Iraqw language is “Naas.”  The locals nearly choke on their coffee in laughter hearing a Caucasian foreigner saying it back to them.  I sure am glad that I came to Mbulu.  It may turn out to be the most interesting decision I make in Tanzania.  People here are wonderful.  Just saying hello to them brings giant smiles.  Every now and then I feel an evil eye on me, but it is very infrequent.  And the best part is that no one hassles me for money or tries to make business with me.  People are amazed to see me walking along the dirt streets, and the stare in curiosity, but there seems to be no discrimination towards me.  What a great little town. 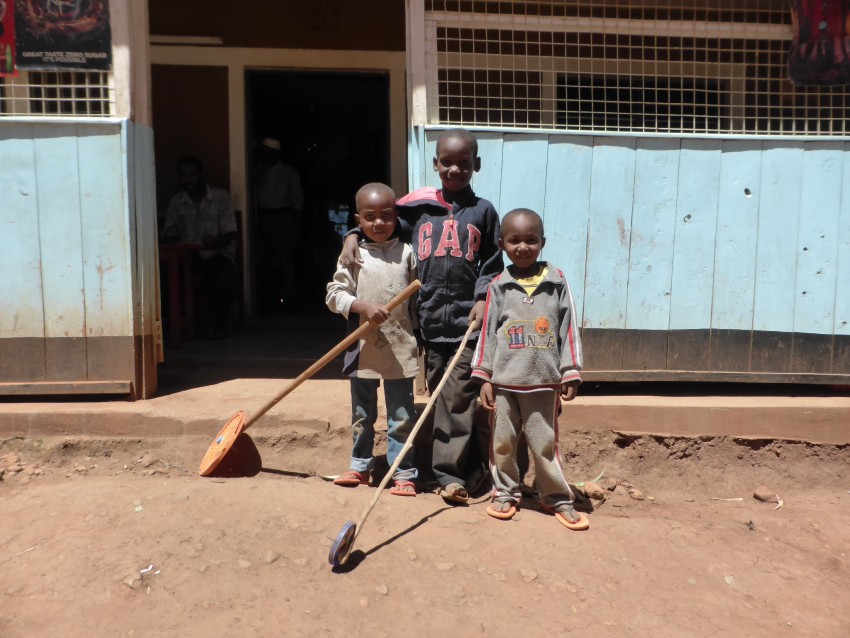 * A soda, such as a Coke in a glass bottle is $0.30.  I have not drank soda for years because of health conscientiousness, but I now have a two ‘Stony Tangawizi’ ginger-beer soda habit a day.  Frick that drink is good! 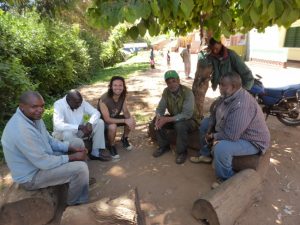 The elders having a discussion under a tree about how to locate a hunter/gatherer tribe for me. 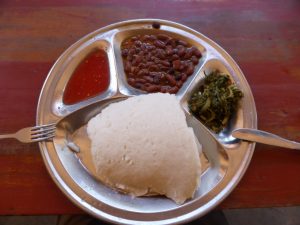 Ugali – flavorless maize flour cooked to a dough-like consistency. Other foods are for dipping into for flavor. 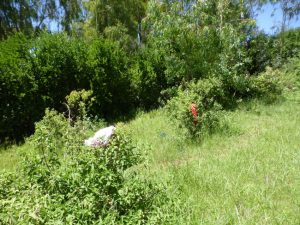 “In those bushes the people are mixing the sex. People come and chase away. The leave their clothes when run away.” 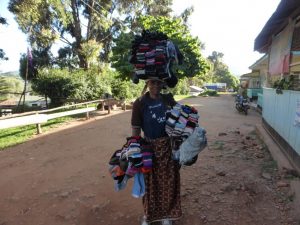 The sock-selling lady in town.

“Juliette is from the countryside east of Nairobi.  She said it is really dry land where she and her family lived as she grew up.  She said that at the age of 12, her grandmother would awaken her and four of her cousins at 03:00.  The five kids of similar approximate ages would have to walk 10 kilometers to fetch water for the family households.  They would all carry 10 liter jerry-cans.  Once they would arrive at the place of known water, they would dig holes in the sand.  From the hole they dug, they could expect three liters of water, and never more.  When they had collected all of that water, from that hole, they would find a place and dig another until they had collected 50L of water that they would then carry 10 kilometers home again and arrive at 15:00.  It was a 12 hour journey just to collect water.  But, the water was contaminated and once they got it home they had tablets that they would put inside of the water to make it consumable…  Incredible…”
— Life in Kenya
[View All]