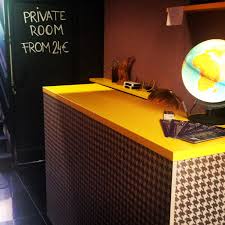 Magic Mushroom Girls
My friend Mick used to manage a hostel in Amsterdam.  He told me that one evening he was at reception when two cute girls came down to the desk, completely naked.  He said he could see by their eyes that they were really high on something and guessed that it was mushrooms.  They were asking him questions about the hostel or Amsterdam and he pretended like they were not naked and tried to have a normal discussion with them.  When the conversation stopped, Mick told me he said, “Okay girls…  I just have one question?  Why are you naked?”  The girls looked at him and asked, “Wait…why are you in our room…?”  Then they looked around and realized they were actually at reception.  One of the girls started screaming and put her hands on her head.  The other girl started screaming and started spinning around in circles.  Mick said that he came around the desk and grabbed both of the girls.  He said he threw one over his shoulder and had one under his arm.  He carried them to the elevator so that he could put them back in their room.  He got inside of the elevator with the girls high on mushrooms.  When the elevator-doors opened at the floor where their room was located their room, there was a group of guys waiting to get into the elevator.  Mick came out with one naked girl over his shoulder and one naked girl under his arm.  The group of guys looked at Mick, looked the naked girl over his shoulder, looked at naked girl under his arm, and cheered, “YEAHHHH!!!” to him in unison.

“Sometimes kids in Rwanda said “Ni Hao” in passing today, assuming that since I do not have dark African skin, I must be Chinese.”
— Children in Rwanda
[View All]