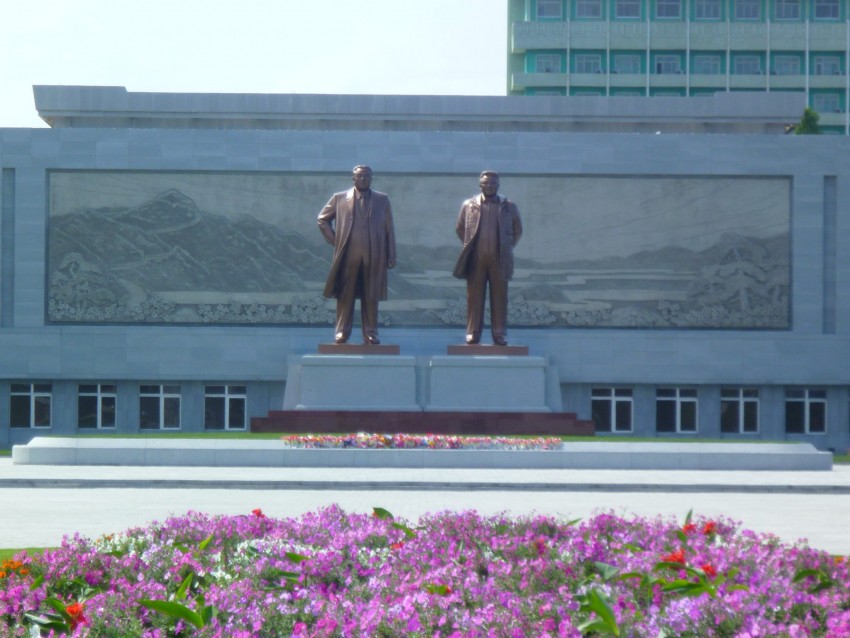 The doorbell of my hotel room in Kumgang, North Korea, went off at 06:00.

Breakfast.  Bus.   Life in North Korea and off to Mt. Kumgang…my group of seven Chinese tourists and I…

This is what North Korea looks like. Who would have known…

North Korea is really beautiful.  One would never think of North Korea as a gorgeous place because the general masses are more likely to think of war and nuclear missiles when the name of the country triggers images in their heads. However, the DPRK is green and lush.  The ocean-side is a very pretty blue and the mountains are wonderful.

Sexy Mt. Kumgang. No, that is not what they called me in high-school.

Along the road are dots of soldiers every couple of kilometers, keeping everything in check.  They hardly even acknowledge our bus, but on occasions when they do, they salute us as we pass.  Other times at the rare check-points, Kim, my North Korean guide, has to get off the bus and show them his credentials.

A pretty waterfall in a country thought of for nuclear weaponry. It is such a crazy contrast…

One can sympathize with North Korea, as they have been in a constant state of war, either physical or mental, from 1905 until today.

Life in North Korea has been 112 years of battle.

In 1905 the Japanese colonized Korea and the Koreans spent the next forty years fighting until they eventually freed themselves in 1945.  There were five years of peace and then the Korean War began in 1950 and carried through until 1953.

There has been a ceasefire since 1953, but there is a constant threat of war and the DPRK is always mentally prepared for it to once again break out.  These conditions are normal to the North Koreans so they do not know any different, but somehow it must be tough on them.

Taking a photo of Kim in my shades to show him how cool he looks!

When the sun came out and I put on my shades for the day, Kim laughed at me and said, “Very strange!”  He had never seen anything like them before.  I made him try them on and it made him giggle.

Life in North Korea means that Kim, and every other North Korean, wears one of two red pins.  One of the pins has the images of Kim Il Sung and Kim Jong Il on it, and the other just has Kim Jong Il.  Every single North Korean wears the pin as a part of their identity.  Everyone. I asked Kim if he has extras at home, to which he confirmed.  I asked him if it would be okay for me to have one of his pins.  He told me that it would be impossible for me to get one.

I offered Kim my sunglasses that made him laugh so much for one of his pins.
No chance.
I offered him my belt that he liked.
Nope.

Kim told me, “I can not trade.  We North Koreans wear the pin over our hearts, because that is where President Kim Il Sung and Chairman Kim Jong Il live.”  I was not even allowed to take a photo of the pin.  They truly love their Great Leader (Kim Il Sung) and their Dear Leader (Kim Jong Il) with devotion.  I have never seen people who are so passionate about their leaders anywhere else in the world.  I asked him about Marshall Kim Jong Un, and how North Koreans feel about him.  Kim said that the country loves their newest leader.

Kim and I left the Chinese tourists behind on our 90 minute hike up Mt. Kumgang.  Age worked in our favor.  It was a very beautiful hike and there was no one else on the mountain.  We stayed at the waterfall at the top for some time and hiked back down to wait for the Chinese to reach the top and return.

Kim and I drank local beer as we waited on the Chinese.

When I paid for the beer with Chinese currency, I was given back some change in Chinese yuan, but when they did not have enough they gave me back a US $5 note.  I found it pretty bizarre to be given American money in North Korea.  I also find it peculiar to get change back at once in different currencies. Trying to double-check the accuracy of your change is pretty tricky when you are dealing with three currencies, two of which are supposed to make up for the combined change together of the original currency price in a money that you are not even allowed to handle as a foreigner. I found it easier just to mentally assume that the North Koreans are not cheaters. The locals seem to have little use for money in their governmental system anyhow…

North Koreans looking at my sticker with a ‘Beaver’ image. It turns out that the word for Beaver in Korean is phonetically ‘Hae ri so.’ My last name is Harris and I have been called Harriso in a Korean accent before when my name has been mispronounced. That is an amazing coincidence…

There were two North Korean waitresses taking care of customers at the table where Kim and I were seated outside.  At the table next to us were a couple of North Korean men in their 30s, eating and drinking beer.  I could see both of the waitresses looking at me, but only one of them was brave enough to come and interact with me.  We had a small conversation in English and she asked my country and my age.

After building up her courage, the other waitress came to look at me and say hello.

I shook her hand and introduced myself, and then she ran away giggling.

It was really sweet.  Kim told me, “I think you like chat with girls!”  I told Kim that I really like him, but that I was hoping to trade him off for three North Korean girls.  It made him laugh…  When the Chinese finally got back down from the mountain and we went to leave our table, the shy waitress said to me, “See…see…see you again!” and let me take a photo with her.  It is not easy to get North Koreans to be in photos.

This is where Kim and I were drinking beer at the bottom of the mountain. I am not sure what is going on here at all, but we have some type of frog band…

Some North Korea:
– In the Mt. Kumgang area there was a giant carving in the stone in 3 meter characters which Kim translated to me, ‘Bright star of Juche, Kim Jong Il.’  If you remember from the first article, Juche is defined as, ‘The capacity to shape our destiny.’
– The roads are empty in the countryside when driving in North Korea, but as we got closer to the cities and towns, the roads would begin to get busy.  Never would the traffic be cars, but rather with bicycles, people walking, and oxen pulling carts around.
– In Wonsan when we stopped for lunch again on the way back to Pyongyang, the town had a set of the massive bronze statues of Kim Il Sung and Kim Jong Il that I have seen in so many photos.  I had Kim walk with me to take a photo of them, but we were not allowed to get very close to the statues.  Behind the statues was a giant building with a nice mural painted on the side.  I asked Kim about the building.  He told me that it is the ‘Revolutionary Museum of Korea,’ but that foreigners are not allowed inside.  Wow, would I have liked to have had a look around inside of that building. Curiosity of non-admittance certainly is enthralling.

A few more photos of Life in North Korea:

A nice little stream in a country thought of for nuclear weapons. Each aspect is such a contrast to the other.

Those are Korean characters carved into the rocks, but Kim said the characters are in ancient Korean and he was unable to read what they say.

There is another difference in North Korea from the rest of the world, and it is that there would be hoards of locals and tourists in that water anywhere else on the planet that looked like this.

Another marker indicating that Kim Il Sung graced this spot with his presence at some point in his life. The date is always marked.

Words of wisdom by Kim Jong Il carved into the rock.

Our bus driver. He would not turn a wheel until he had his professional driving gloves on.

Locals having lunch on the side of the road under the shade of a tree.

I know…just look at that blue…in North Korea.

The coastline looked nothing like I could have ever guessed.

A little out-of-the-sun-for-rest farming hut on the land.

Carts on the side of the road for the oxen off grazing and having lunch.

A bicycle doubling as a wheelbarrow. That is a bike-load of cooking fuel.

Rubber tired oxen carts for use in the city, as opposed to wooden wheeled carts in the countryside.

Life as it looks on the coast of DPRK.

A countryside village for the farmers of the region.

Well, I can tell you that it has probably never happened in the history of North Korea that a driver fell asleep at the wheel. There is not enough time to relax when driving to be able to fall asleep.

I wish the photo was clearer as the crossing arm is a wooden pole painted to look like crossing arms in the western world.

Not another soul on this beautiful North Korean beach.

Local fisherman trying his luck in a pond at the side of a rice paddy.

I have never seen clams like that before. The North Korean clams seem to stick their tongues out when they have been conquered.

For the next part, here is the link:
Travelling Pyongyang North Korea – Part 8

“Horse races are amazing. The crowd totally gets into it. The environment is awesome and grandstands can seat 80,000 people at capacity. The race starts and the crowd gets a little louder, and a little louder, and a little louder, and then, by the last curve before the home stretch, everybody gets so into it that the whole crowd is on their feet and the volume cranks right up with everybody screaming and cheering for their horse until the horses cross the finish line. It makes my whole body tingle. The noise goes from 'level 10' to a light drone at 'level 1' murmur the second after the horses cross the line. It is an incredible experience.”
— Seoul Racecourse Park: Seoul, South Korea.
[View All]