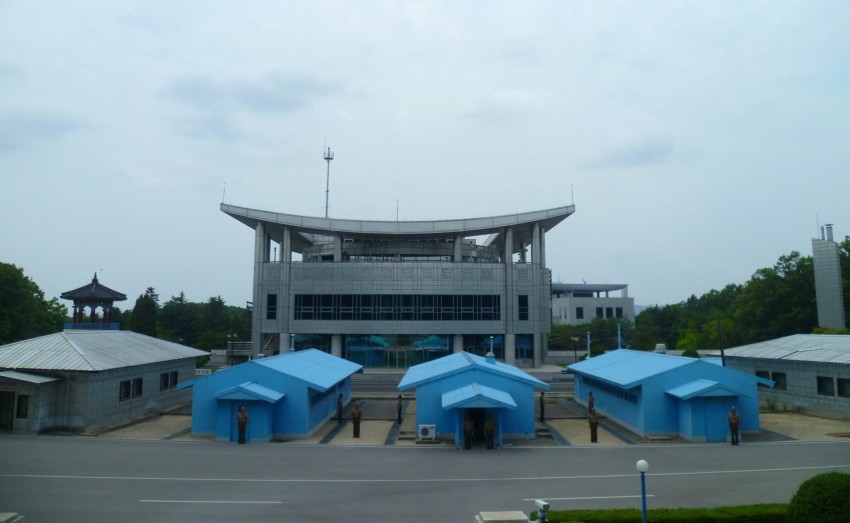 Now, as I said in the first article on the day I arrived, I was just taking in everything from Democratic People’s Republic of Korea at face value of what I was told and shown.  I went to see how North Korea views the world.  And I went to look at the DPRK ‘presentation’ and decided to take it in just as it was explained to me.  There could be incorrect information in some of these articles.  What I am writing is North Korea through the eyes of a North Korean, and North Korea as my eyes viewed it with very little previous information and no exposure…

A blurry version of the Korean peninsula.

Our bus had brought us pretty close to the zone.  The Chinese were inside of a gift-shop buying crazy postcards with anti-American propaganda, t-shirts and chocolates.  Not me…I was standing outside with my guide, and writing down some information in my notepad which he had told me about the North Korea DMZ.

I had not thought of my mistake until later…that I was at the North Korea DMZ…taking notes.  It just did not cross my mind at all.

I was just doing what I normally do and writing down interesting things that people tell me…  As I was doing that, a North Korea soldier in uniform and a hat walked towards Kim and I.  The soldier asked Kim where I am from.  Kim told him that I am from Canada.  I realized at that moment what had probably brought on this question and I subtly slid my notepad into my back pocket.  I could see the soldier looking at me and studying me.  His eyes intimidated me as he looked me over and began asking Kim other questions.

I wanted to be warm and shook the hand of the soldier to semi-introduce myself.  He squeezed my hand very hard in the shake to show me whatever he felt that might show me.  I did not like his eyes at all, nor did I like his terrifying plastic smile when he spoke.  I felt like I could see though his eyes to episodes of his life where he had pulled the fingernails off of men in order to make them talk about things they did not want to discuss.

This is essentially how the Kim-translated conversation with the soldier went:
North Korea Soldier – “May I ask you what your occupation is?”
Me the journalist – “I work with oil.”  (There was no way I was telling him I am a journalist.)
North Korea Soldier – “Ah, I think that is probably a good job.”
Me the oilfield man – “The money is good.  The hours are long.”
North Korea Soldier – “Did you know that today, June 25th, 2017, is the 67th anniversary of the war?”
Me – “Yes, Kim had told me that earlier.”
Soldier – “Canada, your country, fought with the Americans, against us in the war.  What do you have to say about that?”
Me – (Very uncomfortable laugher) “Umm, I think I am not going to answer that.”
North Korea Soldier – “So, in Canada, you live in the middle of America.  There is America below you and America above you.”
Me – “Well, that is not quite right.  America is below us, and there is Alaska to the north-west of us, but Canada is actually a bigger country in size.”
North Korea Soldier – “Did you know that we killed 440,000 Americans in the war?”
Me – “Whoa, I had no idea that was the number.”

Someone called the soldier at that moment and he walked away.  It was a huge relief.  All I wanted to do was get away from the man.  The way he looked at me out of the corner of his eye was too much for me.  I could feel the intense hatred in him towards Americans, and as far as he was concerned that was mostly what I was as well.

The map on the wall of the North Korea DMZ.

As luck would have it, about 10 minutes later, that very same soldier was our guide as we went to the North Korea DMZ.  He told us that they do not have any heavy weapons with them on the north side of the DMZ but he said that the south has them along their border.  The soldier informed us that in North Korea they only carry pistols for protection as they patrol the border.

We then had to line-up individually like soldiers to be lead through the area to get on buses to move closer to the North Korea DMZ.

– The DMZ is 250 km long across the Korean peninsula.
– As well, the DMZ is 4 km wide as each the North and South country has 2 km of DMZ space to the line.
– Just north of the DMZ on the North Korea side, there is a farmer’s village of 250 people.  Years ago when I was in South Korea, I also visited the DMZ from the south side where we could see a place we were told was called ‘Propaganda Village.’  We were informed that it was a beautiful town of empty shells that Kim Jong Il had built so that the South Koreans would look across the border and see how well North Korea was doing to wish they were a part of the same success.  I was unable to locate this village from the north side of the border.  All I could see was the small farming village with an apartment complex in the middle of it.  Perhaps that is what we were viewing from the south side of the border…

The soldier took us around the North Korea DMZ and lead us into a building that had been constructed just before the end of the war.  When the soldier spoke of the war with incredible American detest, he talked of how the DPRK had defeated the Americans in the war.  I had always thought of the war as North Korea versus South Korea, and communism versus liberation.  But, the soldier made it clear that it was a war of Korea versus America.

He told us that the Americans wanted the Korea peninsula as a mainland that would be a direct land-access and front-line to China to be able to keep an eye on the Chinese. Korea was new again and had only been free for five years, so the US thought they would easily be able to move in. However, Korea was not willing to give up and let the Americans in.  According to the soldier, he said that the Vietnam war only 14 years later was the same concept, of America wanting land-access to China, but the Vietnamese also stood their ground.

The soldier went on to explain that the Koreans handed the Americans their first defeat in war history.  He used strong words like ‘embarrassment’ ‘defeat’ and ‘disgrace’ when he spoke of the United States.  After one year of fighting he said that the Americans asked to have a talk because they were being heavily defeated.  He said it was a dirty move by them as they used the excuse for a talk as time to plan another attack.  American eventually asked to sign a ceasefire to stop their bleeding.

The UN flag left behind by the US after the cease-fire agreement.

The Americans wanted to sign the ceasefire agreement in a tent, but Korean President Kim Il Sung had a building constructed where the ceasefire would be signed.  He said that he wanted the building in place so that it would be there to remind him of America’s embarrassment forever.  That was the building we were standing in as we were being told the story of the North Korea history of the war.  We were told that America was so ashamed that they did not bring their own flag to the meeting.  They only brought a UN flag that they forgot to take the flag with them again when they left.  So, the original UN flag still sits on a desk within the DPRK erected building.

North Korean soldiers standing on guard in front of the DMZ buildings on the line. The large gray building behind is part of the South Korea DMZ.

From that building, we were lead to another room that soldiers were guarding.  In the room was a desk with a microphone wire across the middle.  We were told that the cord for the microphone was actually lying directly across the line of the DMZ.  The soldier told us that the room we were in is the only place on the entire DMZ where you can be in both North and South Korea. Beautiful irony abounded as a South Korean manufactured Samsung air-conditioner sat in the north side of the building to keep the place at a cool.

With one hand across the alleged DMZ line between North Korea and South Korea.

The soldier said that there have been over 10,000 meetings in the room with the Americans since the ceasefire in the war because the Americans keep on breaking regulations previously agreed upon.  He said that the North Koreans have asked to change the ceasefire into a peace-treaty, but the United States will not agree to it.  So, the North Koreans only think of the past 64 years as a break in the war…

A few more photos from the North Korea DMZ:

The last signature ever of Kim Il Sung on the day he died.

North Korean soldiers on guard in the DMZ room where the microphone wires along the middle of the desk indicate the actual DMZ between North and South Korea.

North Korea soldier who lead our tour through the North Korea DMZ after having an awfully intense conversation with me. Those terrifying eyes will probably haunt me forever.

The South Korea DMZ in the background.

It is not much of a photo, but this represents what we were told is a farming village just on the north side of the DMZ.

You are probably never going to come across another postcard quite like that in your life.

For the next part, here is the link:
Mt. Kumgang North Korea – Part 6