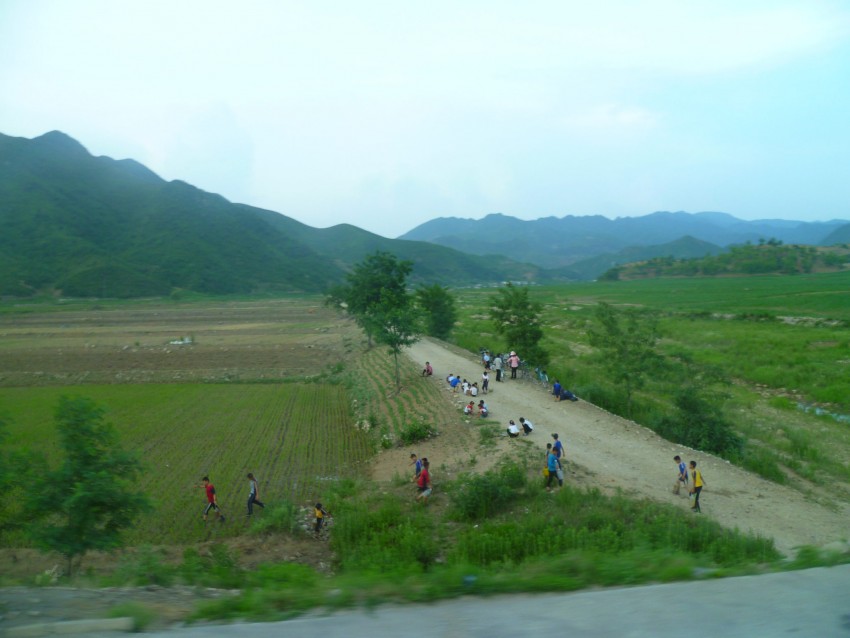 Countryside gathering to work the land.

As we are on our way back to the capital city, travelling Pyongyang North Korea, I was interested in local careers, so I asked my North Korean guide, Kim, about jobs.  He told me that all jobs pay nearly the same.  A dentist makes a similar amount of money as a bus driver.  I wanted to know how it works, and he told me that you can do whatever you want to do in DPRK as long as you study and educate yourself.  I asked him if it would be possible to run a hydro-power station.

He said you would just have to study in the university for it, and once you completed your course, the government would find you a job.

Something is getting done around here.

Kim said that getting into the workforce through education it is the same in the DPRK as it is for westerners with the difference being that westerners then have to compete for jobs once they are finished their studies.

In North Korea the government gives them their place to work once they finish their education.

I asked him about courses filling up and there not being enough jobs for the people finishing courses.  He told me he could not think of examples where there were more people for jobs than there were jobs.  Kim said if he wants to be a doctor in North Korea, he can study hard to become a doctor…

I love this old tractor and the stack of hay. Everyone in North Korea has to do 10 days of mandatory farming work in the springtime for planting and 10 days in the fall for harvest. The entire country participates in the planting and harvesting of crops.

The DPRK is set up so that all citizens have to do some mandatory farming.  Kim said that he has to do 10 days of planting and 10 days of harvest ever year.  He goes to the same farm where more than 10 people meet to work, and it is always the same people that he works with on the farm.

Countryside gathering to work the land.

I asked Kim if he enjoys it the farming..  He said he prefers the harvest as it is not as hard on the back, but that he enjoys both seasons as it is such a social event where he gets to spend time with those same 10 people twice a year.  Every person in the North Korea does the farm work.  The system in pretty great for Kim, as it is a break from normal life.

Earlier, when we were travelling from Pyongyang North Korea and passed through a village, I had noticed a sign and asked Kim to translate the words.  It was the image of a farmer and said in Korean, “Let Us Help Farming!”

Everyone seems to be behind the idea.

When we arrived back in Pyongyang and headed to the Yanggakdo International Hotel after dinner, it was around 21:00.  I had been pressuring Kim to take me out to a bar where the workers go in Pyongyang a couple of days earlier, but that night was the anniversary of the war so nothing was open.

Again, I was trying to convince Kim to take me out after we had settled back into the hotel.  Kim was tired and told me that it would be best to go to bed.  However, it was my last night of travelling Pyongyang North Korea that was not part of the tour…

The background scene for the karaoke word-screen in a local restaurant.

I wanted to see the city at night and I really wanted a break from the organized tourism. I wanted a small piece of my own version of Pyongyang North Korea.

Kim did not want to go out, but I cranked up the pressure very hard and guilt-tripped him about my torture on the tour with the Chinese for the past two days in Kumgang, and now he was going to make me go to the hotel double-room that I was going to have to share for the first time with one of them. I felt bad about the guilt-trip, but I had to be selfish because it was my only chance to see the city.  I knew that Kim wanted nothing more than for me to go to bed, but after a 90 second intensive and convincing rant, he caved in and agreed to take me out.

The problem was that we would have to hire a driver to take us around and we would need to take another guide with us because there has to always be two guides with the foreigners…I had Kim and the Chinese had theirs, but we were always together…

Kim made a few phone calls and then spoke to another guide.  The other guide told Kim that there was a Mexican in the hostel who would probably want to go out as well.  That sounded fine to me, so the other guide went to find a man my age named Juan-Carlos (how Mexican!), and the four of us got into the car with a driver who took us to a bar.

Our own bar in Pyongyang, opened just for us because it was after 20:00.

The bar establishment was completely empty except for the four of us and our driver when we entered. Juan-Carlos and I ordered a juice for the driver, a round of beers for everyone else, and a bottle of soju: Korean liquor that quickly reminded my brain to make my mouth slur every time I talked immediately thereafter the initial shot… That was at about 22:00. I would later find out that when Kim was on the phone earlier at the hotel, he was calling bars and had to convince a manager to open one up for us and the manager had to get girls to come in to serve us as bars in Pyongyang close at 20:00. Ahh, more self-guilt on behalf of my guilt trip.

I knew the nightlife would be quiet here in North Korea, but I had no idea it would not even exist after 8pm…

When we left the bar after a short visit, I asked Kim to ask the driver to take us to the Ryugayong Hotel, the 105 storey 330 meter pyramid-shaped unfinished hotel in Pyongyang that you have probably seen in photos.  Construction on the building began in 1987, but North Korea ran out of money and it is still not completed to this day.  At the time when construction began on the building, it would have been the tallest hotel in the world.  The exterior of the building has since been completed, but the rest of the hotel remains unfinished.  Today it holds the noble title of the tallest unoccupied building in the world.  It was too dark to get a proper photo of the skyscraper, but a gorgeous silhouette of it loomed above us from where we stood.  When we got into the car to go back to our hotel Kim looked at me and asked, “There, are you happy now?” after my little guilt-trip rant.  Yes, yes I was…

We headed back to the Yanggakdo International Hotel to go to bed as I had originally been expected to do a couple of hours before.

When I knocked on the door of my room and the older Chinese man who I was sharing my room with allowed me in, as a father would who was waiting for his son to get home at curfew.

I hoped the guy did not snore. I had not drank nearly enough beer to sleep-drown-out a snorer…

Workers, usually ladies, pulling weeds from the cracks on the highway.

A local framer having a rest and a look at his effort.

Euros…Yuan…  When you receive change while travelling Pyongyang North Korea, you never know what you are going to get.

I wish the photo was clearer, but it is the best I could do in the moment. I love the description that Kim Il Sung offers ‘on-the-spot guidance’ to the farmers. Kim Il Sung seemed to have no heroic limitations…

For the next part, here is the link:
Exiting North Korea – Part 9

“He said that he nearly got an escort last night. He told us, “I got her down the $150.” I asked him if that gets him a whole night? He responded, “One nut. That’s it.” What an expression...”
— Fort McMurray, Alberta
[View All]