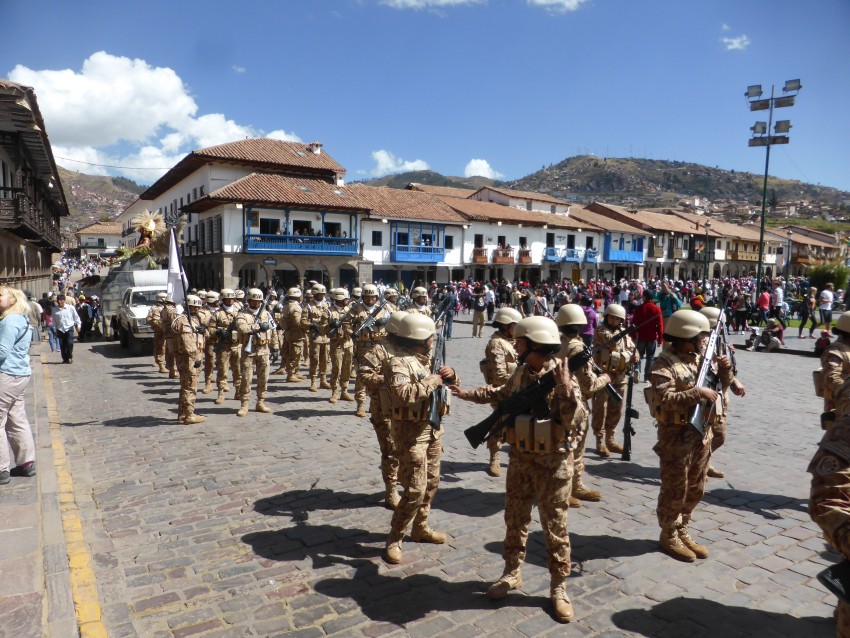 Sucre. I decided to get out of town on this day.

My friend caught a plane towards Iquitos this morning.  I had a blast with her.  We had a little goodbye romance and she headed for her plane.  It was strange for me as I was being left.  I am always the leaver.

My friend Aafje, who ditched me on my birthday, was in town.  She was sick and wanted me to visit her so I went to meet before I left mass tourism Cusco aka Hell for the capital of Lima.  Aafie bought me lunch.  Awesome.  I have not had a hamburger in over three months and it blew my mind how good it tasted.  She is heading south and asked me why I not heading to Nasca to see the Nasca Lines.  I am finally going to miss something on this South American circle as I have hit everything imaginable so far.  But amazingly, I feel like I am in a pinch for time now if I want to see this whole continent so I will begin to cut branches from this point forward.  I decided the Nasca Lines could be a passed over, as it is a long way south of mass tourism Cusco, aka Hell, and I want to head north to the sunshine so travelling all that way for 15 minutes in an airplane to see the lines from above was probably not worth it.  Plus, the lines are not going anywhere should I feel the urge in the future.  Plus, Lima is the cheapest city in South America to fly into…  .

As I was leaving mass tourism Cusco aka Hell to head for Lima, there was some kind of march taking place ad many Peruvian soldiers lined the main square with automatic rifles.  It was a good time to leave, especially if they found out how little I liked their shitty city.  I think that with 60 countries and a countless amount of cities in my life, Cusco is my most despised city of them all. Mass tourism Cusco could not get any worse.  At the bus station, I found out that the prices for tickets to Lima were ½ of the price that ticket sellers wanted in the ‘white’ district of mass tourism Cusco.  It is unbelievable how much I do not like this place.  I bought a full reclining seat for S$100 (about $37 U.S.) for a 20 hour ride.  Peru is expensive and that is very expensive for South America.  I will not last here long….  I made absolute sure that the bus had a working toilet before I committed.  There is trouble in my stomach.

Peru is cool visually.  A hut made out of long bamboo sticks on the side of road is a bus stop.  The Andes Mountain range seems to hold the bus hostage as it struggles to get away along rivers and cut-aways in the mountain side that make the road.  On the bus, shitty dramatic American doomsday movies play on the television at the front of the bus, attracting attention to stupidity rather than the beautiful scene outside the windows.  I wonder why it is that people need entertainment presented to them in their faces rather than being able to entertain themselves with what is going on around them outside.

I have been around a woman for 8 days in a row and it is nice to be alone now where I can be gassy and not have to be sneaky about it.  I was having serious stomach problems and having questionable bowels on a bus is a less than desirable place to be.  I had two serious episodes that I had to get through on 12 squares of toilet paper that I had with me.  Conservatism in such a situation is not ideal.  When the bus stopped in a small town, I went to get off as well to see if I could find another roll of toilet paper in the station.  As I was standing there, the bus began to pull away.  I had to run after it and knock on the window at the front so that the driver could see me and stop the bus.  I got back on with a smile.  When I returned to my seat as the bus left the station and headed on the road, I noticed that they woman who was sitting next to me and her two friends were not on the bus even though their bags were.  The woman next to me had been a rude bitch, so I did not bother to try to broken-Spanish tell the driver that he had left them behind.  Had you said ‘Disculpe (excuse me)’ when you wanted past me in the night instead of just slapping me in the leg as I slept to wake me up to let me know that you wanted out, I would have taken care of you and your friends and stopped the driver for you, bitch.  Instead, we travelled for about 15 minutes before I supposed a mobile phone number could be found and the driver could be contacted to stop.  About 10 minutes later the three of them arrived where we were parked with the bus.  I stone-faced them while the guy beside me had a conversation with them.  I did not care enough to be interested in any of it.  Manners go an awful long ways, bitch.

I am not sure what tires are not made out of in poorer South American countries, but two flat tires later we arrived in Lima.

“As Bery and I were chatting he pointed to the avocado trees in the yard and said, “Girls!  Monkeys!”  A half a dozen young ladies went running for the avocado tree to chase the monkeys away.  Bery told me, “We have to keep the monkeys away.  They come in hordes of 20 or 30 and they will empty a garden in one hour.””
— Monkeys of Uganda
[View All]