Aug 5
Waking up in a hammock for two mornings in a row will give you sore shoulders.  It sure saves money to sleep that way though.  And saving money is necessary right now…  I ended up in this park with about $15 to my name because we were in such a hurry to catch our boat a couple of days ago that my hung over mind lost the ATM thoughts from last night that it was supposed to have this morning when we raced for the boat.  My friends Marc and Knut have been having a blast with my financial problems.  They have been offering me money to do a lot of dangerous things so that I can afford lunch or dinner.  Marc told me that if I swim with the small caiman crocodiles for five minutes he would buy me breakfast.  If I got bit he would throw in lunch…  It is good teasing.

With a 90 minute hike in the middle of the heat of the day to get out of the park, we were sweaty and tired.  About half way through, Chiara, our Italian friend who I knew liked me, “Castor, I think you need to kiss me to give me some power for the hike.”  I asked her, “A kiss on the lips or a make-out?”  She said, “As you wish…”  So I made out with her in the middle of our hiking path in the sunshine while my friends were standing around.  That was all, and we continued the hike out of the park.

Upon our exit from the park, we caught a bus towards Palomino, but I was told there was no bank machine there.  The bus driver told me there was one in the next town about 20 minutes further up the road.  We rode the bus for an hour and in Palomino my friends got off and I continued alone to a town called Mingueo where the bus drove me right to the bank with the ATM.  Thanks!  I may have been the only gringo to even enter the town in its entire history…

A Colombian-African (is that the politically correct way to say that?) in a really shitty car with a sign in the window that said ‘Palomino’ pulled up to me after I had cashed up.  A ‘colectivo’ local car that acts as a small bus.  I asked him the price.  He told C$3,000.  I agreed.  He got out of the car to open the trunk for me to put my backpack inside.  The trunk lid was held in place by a bungee cord.  Then when he opened it, the shocks to hold the trunk lid up not working and he had to struggle to keep it open as shoved my bag inside.  He got into the driver’s side of the car and had to reach over to open my back-seat passenger’s side door as my outside handle had been busted off.  I crawled into the back seat of the car onto a broken seat that had a strange fold in the middle.  As we headed down the road there was a terrible rattle coming from the back of the car.  Of course I could not tell how fast we were going because the speedometer did not work.  The stereo had been ripped out of the dash and there were no windshield wipers blades on the their metal arms of the car that were against the glass.  There was barely anything salvageable left in this automobile that was hauling me and two other strange women from one town to another.  When the first woman got out of the car she handed him C$2,000.  I smirked and said to him in Spanish, “Ah, so it is only C$2,000 for the woman but C$3,000 for the gringo….”  He laughed at me with a genuine smile.  I did not mind the $0.50 overcharge.  He seemed to need it more than me.

I like to be a bastard.  I am harmless but I like to do bastardly things.  After dinner, Chiara and I separated from our friends and went for an evening walk on Palomino’s beach.  It was clear she had a crush on me.  I also knew she was on her period so I was not chasing her very hard.  Limitations limit fun most of the time.  As we were visiting on the beach I told her, “I wish you were not on your period because I would like to have sex with you before you leave in two days.”  She laughed at my honesty.  She told me that no man in Italy would be so honest and might only say such a thing in a joke.  I told her most Canadians would likely not be so honest and might only say such a thing in a joke.  On the walk to a dark area of the beach to get away from the light pollution so that we could see the constellations, we saw a 20 year old kid who was passed out hard on the sand.  His buddies seemed to have abandoned him.

I decided that I did not care if Chiara was on her period.  The ocean was right there if there if we wanted to go for a swim after.  So we had sex in the sand. My first beach sex.  It is a romantic idea that is actually a terrible idea.  You have to be absolutely certain that sand does not approach certain areas.  Sand can cause friction if careful care is not completely exercised.

After we finished I had a condom that I needed to do something with.  I did not want to leave it on the beach.  I hate to litter.  I could see there was a little bit of period on it.  I picked the condom and the wrapper up, hoping to find a place for garbage as we walked towards where our friends were in a bar.  I also hoped I would not run into anyone I knew as I walked with a really dirty condom in my hand.

Then on the way, we approached the passed out guy on the beach again.  I knew he was not going anywhere so I went up to him and I placed the condom with a little blood on it right next to where he slept so that it would be right there when he woke up.  Chiara told me I was bad.  I thought it was hysterical.  I mean, when that kid woke up alone and he seen a used condom beside him, a nasty one at that, without any recollection of what happened during the night…he probably had an awful lot of questions and a lot of concerns….

*“The machine you use to switch off fire.”  My Italian friend Rosie trying to describe a fire extinguisher. 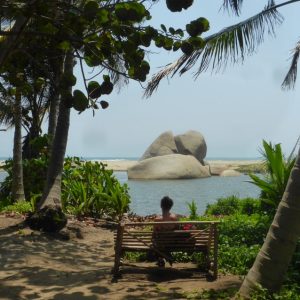 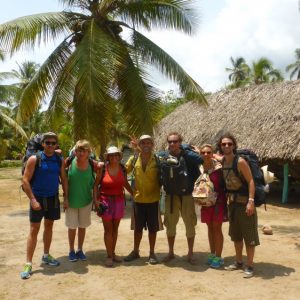 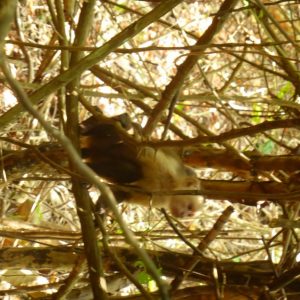 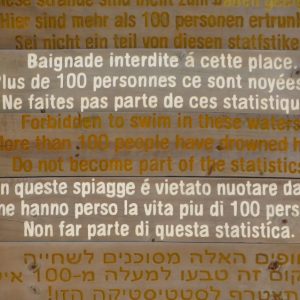 That is a warning! 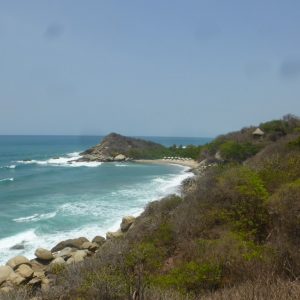 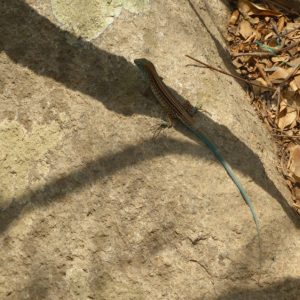 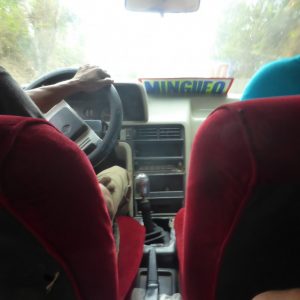 The crappiest car I have rode in for many years. 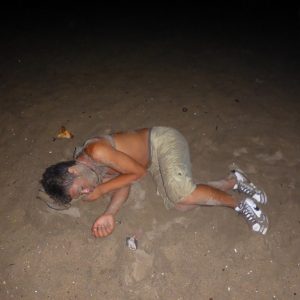 Out cold in the sand.

“It is clear that we exist in a white, right-handed, man’s world.”
— London, England.
[View All]