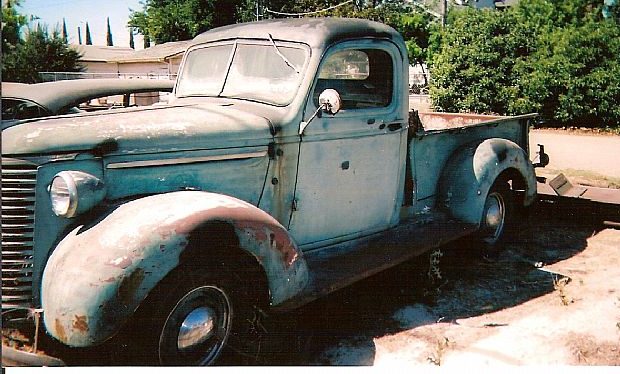 It was a 1939 Chevy.  Yea, I do not know, dad made the deal for it.  I don’t imagine he paid very much for it.  It was pretty bad.  But yea, we were in the garage when we heard this noise in the yard and there was the truck sitting there, kind of in the middle of the yard, and the steam was rolling out all over the place.  I am pretty sure they towed it almost to the house and then started it on the lane and drove it into the yard.  They guys that brought it, they were gone out of the yard as fast as they could go.  I was born in 1936 and would have been about 16 at the time.

I do not know if it would have started with the starter or not, we just pushed it straight into the garage and pulled the motor apart.  Dad had had a ’47 Chev car he had bought, a fairly decent car at that time, second hand, but anyway there was something wrong with the motor and he made them do the whole motor in it, but he kept all the used parts.  So all the parts was thrown out behind the shop in the junk yard out there.  Well then he goes out and he picks up all these pistons out of the junk and we took them in and cleaned them up.  They had been laying there quite a while.  We cleaned them all up, put a new set of rings on them, put them in that old truck.  Dad was pretty good with that stuff.  That motor never did go out of it.  I would drive that old sunofagun 100 mile an hour.

But I could not afford tires for it, and they were smooth.  They were probably a six ply tire.  So I had to get re-liners to put inside.  There were holes in the tires as big as a quarter.  But them re-liners are only so thick, so every week I would have to take the tire off and move the re-liner a little because it would be wearing a hole in it.  But my friend Art Volke did not have any re-liners so he cut one tire up and put it inside the other tire.  That’s how he got by.*

But that old truck of mine would run.  Whoooee…  And it didn’t have no grill.  Didn’t have no bumper.  I mean it was pretty rough looking.  I don’t know what the deal was on it, but dad bought me that truck.  By the time I got rid of that 1939 Chevy, I got some money for it.  I don’t know where that truck went.  Maybe dad traded it off.  He probably traded it off and made money on it.

I’d got a bumper for it and I’d got a grill for it.  And the fenders were all kind of flopping.  I got it down in Jimmy Cronan’s garage in Big Beaver because Stewart had run into the railroad crossing sign and had tore the whole fender.  Jim put it way in the back of the garage with the coal pile back in there and said, “Well, you can work on it yourself.”  Of course if I was stumped a little bit, Jimmy would come back there and help me.  Old Jim could fix anything.  It was there for quite a while and those fenders were all cracked out.  I went back one day and this fender was all straightened out and all welded up and Jim had a big grin on his face.  He had welded her all up.  I don’t think it cost me hardly nothing.  Then that 1939 Chevy looked pretty darn good.  If it’a had a paint job it would have looked like a new truck.

But the seats were all…they were gone so the springs were sticking out all over the place so you had to take old rags and stuff them into the springs in the seat.  That old 1939 Chevy.  I should have kept that too.  It would have been a collector’s item today.  That was my first truck.

I remember one time I came home and I thought there was something wrong with that darn truck.  I couldn’t get it turned.  The tie-rod end had fell off of it and I finally got it turned up by the garage there but there was a skid mark around the yard.  And I think we’d been across the line going like everything with it.  But I got it home anyhow with the tie-rod off of it.

And then one time I hit a cow with that truck and I bent it up.  I did not want dad to see it, so I set the end-gate up against it, and in the morning I seen him over there.  He had the end-gate back and he was looking at it but he never said anything.  I guess he figured that because I put the end-gate there, there must have been a reason.  He never said too much about wrecking the thing.

* Tell me about how Art Volke put a tire inside of a tire.  How did that work?
Well they had tubes in the tires then.  The tire he put inside was to cover up the holes in the tire on the outside.  I don’t think they were balanced very good.  He had to cut it so that it would fit inside there.  It would be an old wore out tire to fit inside.  That was the way a re-liner went too.  It went all inside but it wasn’t very thick.  So the tube pushed up against the inside tire and the inside tire was up against the outside tire.  There were not tubeless tires back then.  They all had tubes in them.

Gong back even further to the Ford Model-T days, when they were hard up and couldn’t afford a tube they would stuff the tires full of rags.  I heard of them putting wheat in there with and they would soak it with water and it would kind of swell up.  But a lot of them put old rags in there if the tube was wrecked.  You’d see the rags coming out through the holes.  I never seen it, but I guess that is what they say.

For the spark on the Model-T there were coils.  I suppose there was four of them because there were four cylinders.  That was what gave it the spark.  And then they took those coils and the made telephones out of them.  They put one of those coils inside the telephone to give the telephone its power.  Originally we used a barb wire fence as there was a lot of barb wire phones at that time.  The sound was not too bad I guess.  Then to get it better when they took telephone wire and just strung it along the fence.  To start with Grandpa and Del Coubrough, they were a half a mile apart, and one guy had a radio and the other guy didn’t.  They could send the radio through the barb wire and then they could both listen to it.

With the phone they kept getting more people on the line all the time.  For the rings you would have to go; one long one and one short one then another long one then another short one or whatever the ring was you were calling.  You would count the rings to know whether it was your line or not, but everyone listened anyway so it didn’t matter.

Then the rural telephone came.  There was an exchange place or a switchboard just before you got to Coronach on the road to Scobey where Frank Krall lived.  A man sat in there all day and had different wires he plugged into the wall.  I suppose at a certain time of the night he want to bed.  You put in a call to him and you said I want to talk to So and So and he plugged the right wire into the right hole in the wall.  There were party lines and they still had that ring system more or less.  You would pick up the line and you knew somebody was on it and nobody talkin and it would be Billy Cook and Ralph Rasmussen and they didn’t say much.  It would just be dead and pretty soon one guy would say, ‘……Yeah…’

“One sure can lose track of which day of the week it might be when they get abducted and forced into a three-day no-clothes-change, bender. I have learned that the changing of clothes seems to indicate day separations...”
— Brooks, Alberta
[View All]