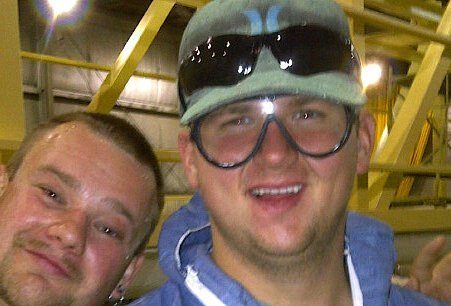 My worst job was the pig barn.  I started there washing pig-shit when I was 14 or 15 years old.  Then, I started doing the other jobs throughout the barn.  We used to do our own semen collection.  You’d have to haul the boars from one room into this other creepy black room with a weird pedestal where the boar would actually mount a stand that he thinks is a sow.  He starts fucking but you are basically holding his dick.  You have a pair of gloves on!  You’re not doing it with your bare hands!  It is pretty gross…really.  But it was a job, and at the time I made good money, so, whatever…

We’d collect the semen and after that was all done, once a week we used to artificially inseminate the sows too by inserting an apparatus.  For inseminating, we used probably an 18 inch rod, probably half-inch around.  Plastic.  The big yellow part on the end is almost like the tip of your dink.  The semen comes in tubes.

You bring the boar out to walk in front of the sow.  It is all in the computer system so you know when they are going to be in heat.  Once that boar walks in front of them, they smell him.  They just lock up…they ‘stand,’ as it’s called.  And once they are standing, they are basically ready to get bred.  So, you take the rod and you put it inside.  The sows lock it in.  Once it is actually locked into the cervix you feel that you can’t pull the rod out.  The sow has got it engaged.  You have this semen tube on this rod and you let the gravity work.  Once they are standing, the sows sort of suck the semen in.  It is kind of gross…  Hahahaha!

The sow is just in a regular stall, but once the pigs are getting close to their ovulation, we put the ones we’re getting ready to breed in these crates or pens that are side by side.  The crates are 2 feet by 8 feet long.  The sows can’t really turn around.  When they are ovulating and the boar is in front of them, that is where they are standing and they are locked.  Once you have the rod inserted and the semen’s hooked up, you’re supposed to actually punch the pig and there is a bag you actually put on their back which mimics the boar breeding them.  When the boar is actually having sex with the sow, they are beating the shit out of them at the same time, because they have a 1,200 pound boar on their backs, ramming their hooves in them.  So, you’re actually supposed to hit them and mimic the whole roll.  It’s weird.

I remember, very first doing it…I had the tube locked into the sow…draining the semen into her to inseminate her.  I thought it was all done and I pulled the tube out and I got a face full of…jizz…  I got a facial from a pig!  Hahahaha!

One day we had all these boars in the barn.  We had one boar that was just massive…1,200 pounds almost.  We never used that boar because he was too aggressive.  You could not even get near him.  The one lady working in that area of the barn wasn’t working so was I working for her, but she’d also moved all the boars around.  I went to move the massive boar out of the way to do the inseminating.  As soon as I let the boar out, he just completely started bee-lining at me.  I remember running down the hall, get to the end of the hall and there’s just this big blue board for moving pigs…  I grabbed it and just as I turned around the boar was already right on my ass and he thrashed his head and cut the board right in half with his tusk.  The chunk of board I had left, I remember putting it half-assed over his head and he flung his head up and it threw me probably 10 feet in the air, on top of the crates where the sows were.  I remember being completely shooken up so I called my boss.

This boar was still walking around the barn, destroying shit, cause he’s a dick.  So, basically, we needed to do something about it so my boss came in and he was going to euthanize the thing.  In the barn we had a bolt gun.  We couldn’t have guns in the barn because it’s run by the university so we had a bolt-gun that had, probably a 3 inch steel rod, and you put the shell inside it and when you shot it, it would shoot the rod into the pig’s brain.  It has somewhat of a safety because you have to depress a thing against their head and then pull the trigger.  We gave the boar Stresnall, which is a drug to kind of put him to sleep and make him all drowsy.  We gave him a ridiculous amount of cc’s.  A sow we’d give like 20 cc’s and make her groggy and drop.  We gave him like 160.  He still was hardly dropping down.  Finally, he was kind of getting down on his knee a little, so we shot him in the head, but it didn’t go through his skull.  He was too big of a boar and too old.  We basically smashed his skull a little bit.

He jumped up, freaked out, destroyed crates like crazy, but then after about 10 more minutes he dropped down again.  We tried shooting him again.  …We did this eight times till finally the boss is like, “Fuck this…”  He walked back to the tool crib room and he grabbed a 12 inch screwdriver and a sledge hammer.  I had to hold the screwdriver in this hole in the boar’s head, where there was partially a hole anyway, and the boss took the sledgehammer and just smoked the screwdriver right through his head and rammed his brain around to kill him.

It’s crazy.  It was good money though… 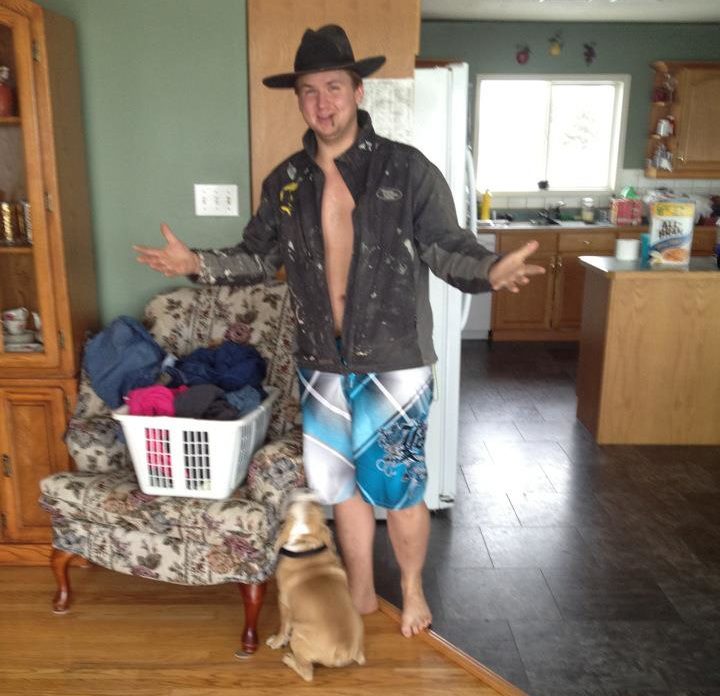 “The driver was using Q-Tips to clean his ears as we were driving down the road at 120 km/h.  Evidentially, even though he was two hours late, life was still too much of a rush for him this morning.”
— Life in Namibia
[View All]