Skydive Interlaken in the Swiss Alps 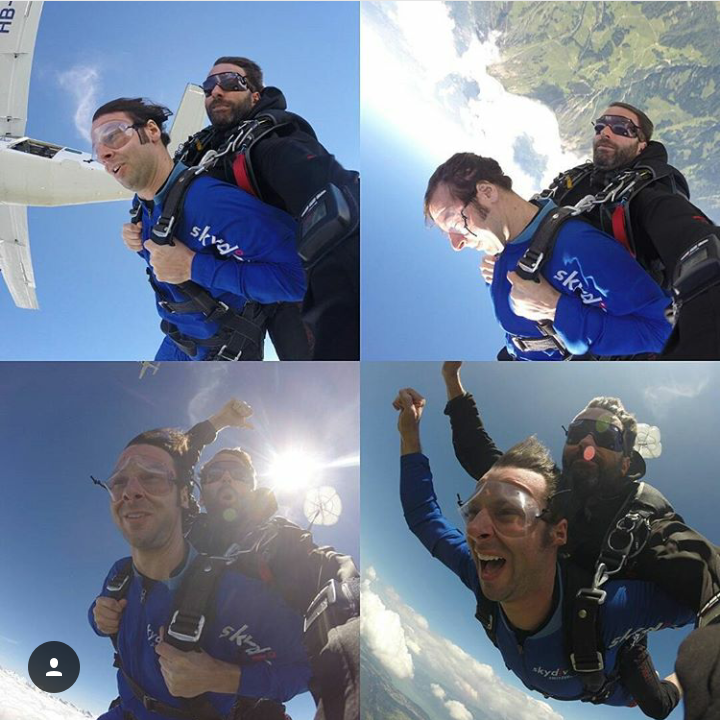 Skydive Interlaken in
the Swiss Alps

‘Stairway to Heaven’ and a ‘Skydive’ seem to reflect opposite directions, but for me they will now be forever linked…

I was showered, up for breakfast, packed and ready for my hang-gliding adventure when I arrived with my backpack at the front desk of Balmer’s Herberge in Interlaken, Switzerland.  The wonderful staff told me they had bad news and that my hang-gliding experience had been cancelled.  They tried to get me a spot paragliding.  Full.  Then they asked me what time my train was departing?  “I think around 3pm.”  They asked me if I thought I had time for a skydive instead.  “Ummm, yeah…I think I can probably find a way to make time for that….!”  Chyaa!  A skydive!  I have wanted to try that for 15 years, and as luck would have it, there was still a spot for me open in the early afternoon.  Skydive Interlaken in the Swiss Alps!  Awesome!

All of a sudden Andy, the man who would be attached to me as I jumped out of an airplane, was at the hostel to pick me up.  They were running late so I got into a van beside a Russian girl who was heading to the same place to take lessons, and we held on to what we could as the van did its best to make up for time that all of us in the vehicle were obviously short of.  It was a fast ride.  As we pulled up to Skydive Switzerland to park, one of the instructors sitting in the front said, “Well, the scary part is over now…”

A large building was busy with other jumpers getting ready when I arrived.  I was outfitted in a pair of blue coveralls that I wish I had been able to keep that said Skydive Switzerland on them (those would be pretty cool to have on the farm at home for doing dirty work).  Everyone was harnessed-up and then a group got into the plane to take off to do their jumps.  You could really feel excitement in the air.  A second group went.  I was in the third group.  It was go time! 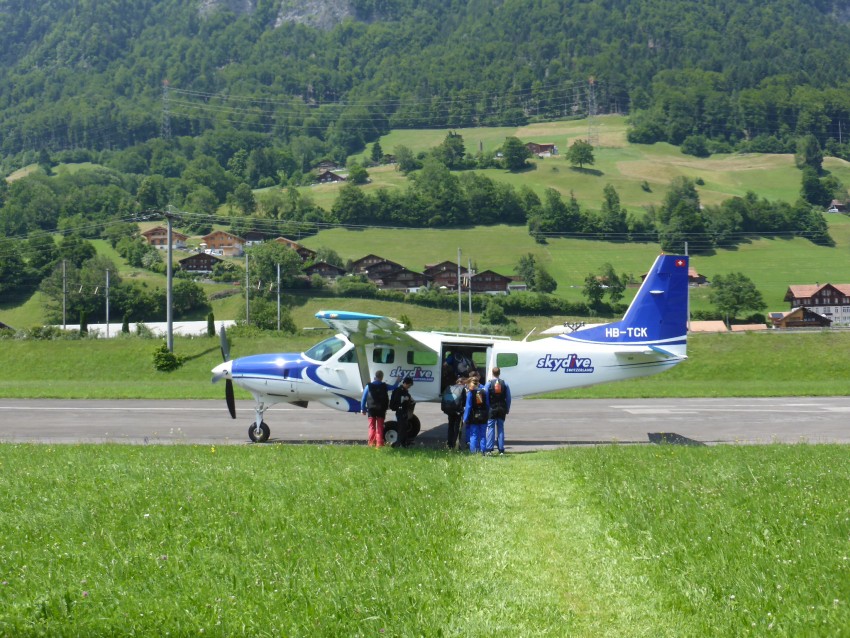 I followed Andy to the airplane with five other sets of tandems to a single-propeller plane with the Skydive Switzerland logo on the side.  It was a very small plane and the 12 of us took up the entire seating area in the aircraft.  Two sets of the tandems were on the floor in front of us and the other four of us sets sat straddling lengthwise benches inside of the tiny plane.  We started getting ready as the plane took off on the small runway and suddenly we were in the air aiming for the sky.  Each of us jumpers sat in front of our tandem instructor who tugged and tightened straps to make sure we would be stuck together for the jump down.  Andy was pulling us together and we were making jokes about how well we were getting to know each other.  He told me it was not a Mars bar in his pocket.  I hoped it was…

The plane kept on climbing into the air.  I told Andy, “Scare the heck out of me.  I am a pretty edgy guy and I know you are in control, so push the limits of this skydive.”  So, Andy started telling me about how depressed he was.  That was very clever.  I asked if his wife had just left him.  He said she had just.  Took the kids too?  Yep, she had…  I asked if he had any terminal diseases.  To no surprise, he had several.  It was very entertaining and made the air even lighter.

After a bit of time Andy started wiggling the shoulder part of my body-harness.  He looked concerned and said, “Hmmm, it looks like we may have given you an extra-large harness by accident…”  He wondered aloud how it happened when they were in such a hurry to get everyone fitted and how I was given the wrong one.  I looked at him and curiously asked, “Yeah?”  He said, “Yeah, but it should be okay anyway…”  Now that concerned me.  A lot of thoughts ran through my head in a very short amount of time.  Andy’s coworker, strapped to the jumper beside me, said, “Don’t worry mate.  We’ve all gotta go sometime.”  Andy said that as long as I held onto the straps tightly, I should be alright.  That made me uncomfortably nervous so I checked how the harness fit the guy who was seated next to me.  It was about the same as mine.  Andy laughed and said, “You told me to scare the heck out of you…”  That was very crafty, and effective… 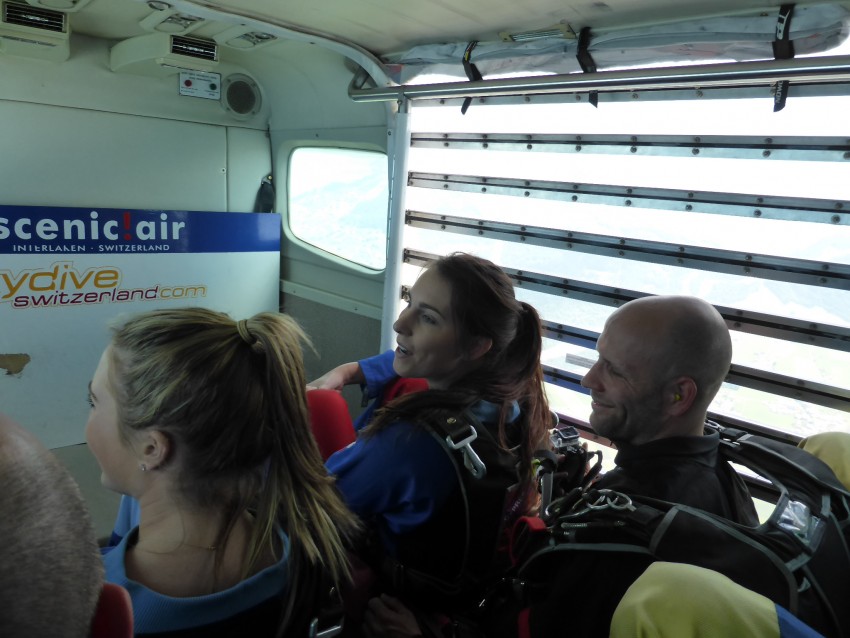 The plane got to 3,700 meters where we were above the clouds and the snow covered peaks of the Alps that poked through the clouds below us were all that we could see of Earth.  The rest of Switzerland was far below underneath the billowy layer of white.  Then the plane idled down and the side door opened.  Now it was really time to Skydive Interlaken, Switzerland…  Three sets of tandem-jumpers went out ahead of us.  I watched them, one after another, crawl to sit on the edge of the plane ledge.  Once on the edge, and with their feet hanging out into the free air below, they disappeared…  One.  Two.  Three.  Crazy.  We were next…

Andy told me that once we got to the edge of the plane and I sat on the ledge I was to tuck my legs back under the plane and look up.  It all happened really fast…so fast that I did not have time to think about the situation.  All of a sudden we were on the ledge.  Then we fell from the plane and did a flip as gravity took control from us and we pierced through the clouds.  A feeling came over me that I have only ever really felt before on amusement park rides but that feeling lasted and lasted as we raced freely with no controls towards the green far below.  I had to keep my mouth closed as my teeth were aching from the cold air rushing into my mouth.  We just kept on falling.

It was incredibly noisy and it was impossible to hear anything except the wind ripping past my ears.  It was a 45 second free-fall but it felt like it could have been two minutes or more.  I had my hands out to feel the air and we cut through it.  You know it is going to happen, but you do not know when…it is coming though…and then all of a sudden without a noise you can hear…an intensive stress heaves on all of straps of the harness!

The parachute had obviously opened.  In the immediate change of the situation, the initial effect of the opening chute felt like we were actually being lifted and shooting upwards towards the sky again.  The contrast is so drastic.  Then…like someone had just been ‘shusshed’ during an examination in a classroom…all was silent.  We were still a very long way from the ground, and we floated down like bubbles gently falling through the air.  Andy steered the parachute and swung us around as we came down.  He told me it takes about six minutes to get from the plane to the ground.  We were able to have a normal conversation about jumping out of planes for the rest of the experience as we came down. 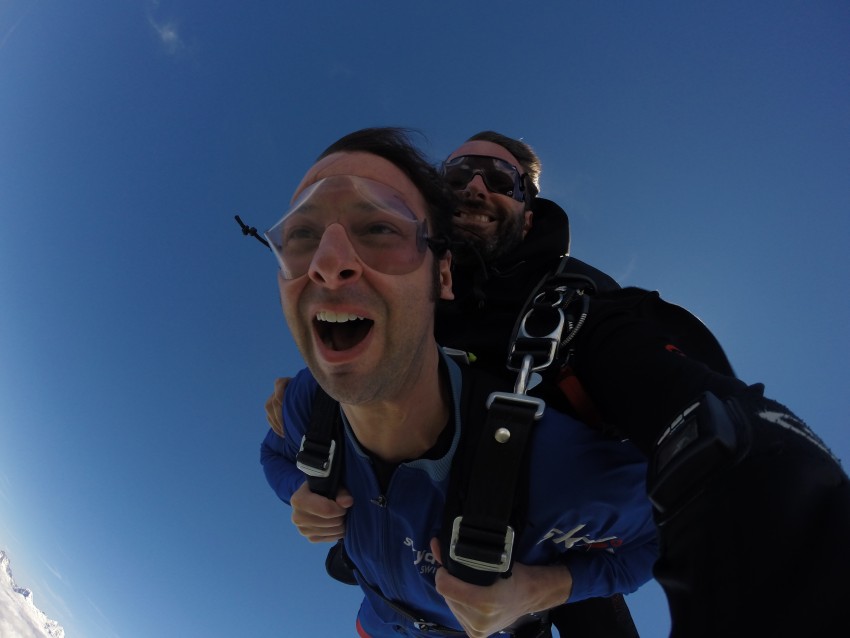 How Andy knew where to guide us on the way towards the earth impressed me.  From high above, to my untrained ground-reading skills, it all just looked like an area of farms, houses and roads below.  Skydivers basically aim for a speck from nearly 4 kms above the ground.  Even though the parachute was opened, it still went very fast and the next think I knew we were right above an area that I recognized as the grass beside the runway where our plane had left from.

I lifted my legs to a sitting position and we gently touched down on the green grass.  The landing was so soft; it was like sitting down on a couch after a long day of work.  Andy detached a couple of carabineers and we were free from the awkward closeness.  Just like that, the skydive was over and I stood up.  Had I been listening to Led Zeppelin’s ‘Stairway to Heaven’ from the moment we jumped out of the plane, I would still have two minutes of song left and as I got to my feet!  Those last two minutes would have been just in time for Jimmy Page’s solo where I could have air-guitared along, maybe even from my knees, and then screamed out with Robert Plant to the last verse of the song,  ♫”And as we wind on down the road…our shadows taller than our soul”!♫

I freaking felt like screaming something….!  I had just jumped out of a freaking airplane!

The first six minutes of ‘Stairway’ is actually a skydive…

It has been years since I first wanted to jump out of a plane and parachute down.  It certainly did not let me down.  It was so fast, all of it, from initially getting on the plane to standing up on the ground again after it was over.  What a thrill!  What a ten out of ten super-mega-rad experience!

Skydive Interlaken, Switzerlend!  Do it!

If you have ever been thinking about it, but you are too nervous to go, just go and do it.  It happens so quickly that there is no time for the fear to remind you that you are testing your existence and doing something completely irrational.  One minute you are in a plane.  The next you are crawling to the ledge of an open door on that plane.  Then next you are falling out of it.  A few minutes later you are on the ground as adrenaline continues to push through your veins.  There is no time to think about fear.   It just happens.  Andy said he would be doing approximately ten jumps on the day.  I went to the building to take off my harness and when I did my camera fell from inside of my coveralls, where it had been in a pocket, and down my leg and onto the ground.  Whoa…  Close one!