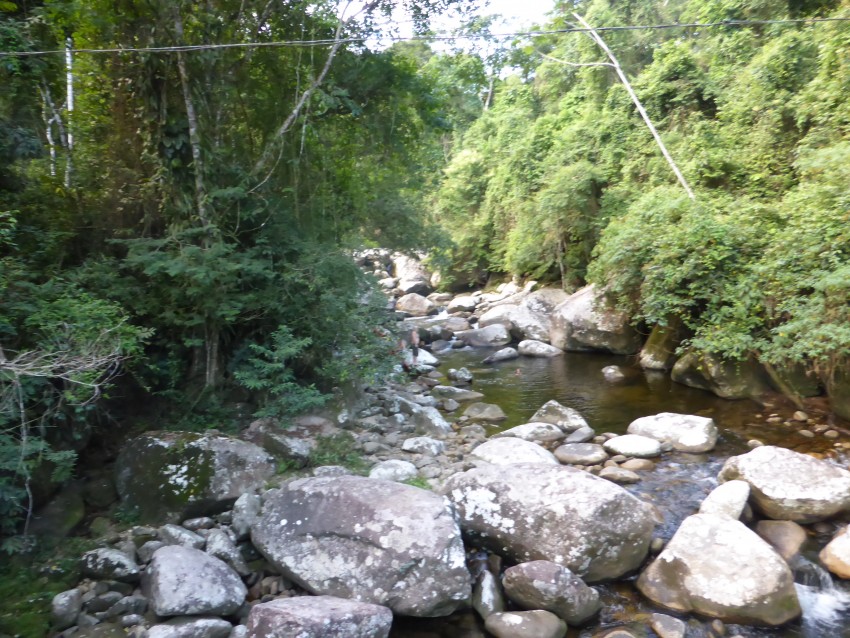 The river on the way.

I woke up in my tent at noon.  It was hot.  Sweaty hot.  I packed up my tent and went to find the others.  It was the next day after ayahuasca and everyone was hanging out on the rock.  I felt like an outsider because all I wanted to do was go home.  So, I went to the church where the guitar remained from last night and I played it for a bit while everyone else rocked out on their platform without music.  I had a jam with a four year old on a maraca and a twelve year old on the drum.  It has been a long time since I have had a band and it was pretty cool.  But, kids get bored easily, even on the verge of church rock stardom and they wanted to do other things than just make music.  It is always the same.  So, we went for lunch that had been made at the kitchen.  My plate was the lid off a pot.

We walked for about an hour out of the forest to a bus stop on the highway and made our way back to Rio de Janeiro.  I was so mentally exhausted after ayahuasca that I could hardly talk.  So, I rode in silence back to the city while everyone else visited.  I do really like it how everyone refers to taking ayahuasca as ‘doing work,’ because that is really what it is, doing work inside of your mind and self realization.

We got back to Rio de Janeiro and I was so happy to be back at the favela as I was so tired.  Everyone else said that they sort of had a lightness and a buzz after ayahuasca, but my mind was famished from all of the hard thinking I put it through.

It was a wonderful experience.  But after ayahuasca I was so exhausted that I was nearly incapable of involuntary organ usage and I was not sure if my eyes would blink on their own!  I was tuckered right out!

“My cousin came to London to visit and he really enjoyed.  Shame we couldn't party hard because I've been busy working and he has diabetes and needs a kidney.”
— Carlos
[View All]