Well, today was relatively quiet as provisional results for the polls began coming in for the Ugandan election.  The 30 year dictator, Yoweri Museveni, is in the voting lead, but his position is not with accusations of scandals and corruption.  Opposition leader, Kizza Besigye, the only other real competitor in the election, has been arrested again today by local authorities.  He has now been arrested two times in two days (his third arrest this week).  Something in the air stinks about this and it is clear that there is dirty business going on behind the scenes.

Police announced that the arrest of Besigye, an outspoken candidate and an enemy of Museveni, is to prevent him from announcing his own election results.  Besigye and his supporters have been vocal about the election being rigged by Museveni. Museveni has been in power since taking over with a military coup in January 1986. (Pre-2006 elections, Museveni campaigned to change the limitations on terms for which a president in Uganda could hold office).

Pure corruption is what is taking place here during this time…

Besigye supporters say that Museveni is running an unfair election and continues to bully the opposition. By arresting Besigye, it makes the opposition appear unstable in an attempt to alter the psyche of Besigye supporters. The word from police is that they have arrested Besigye on accusations that he planned to announce “purportedly final results” which would be “disturbing public order”.  Opposition supporters say this is purely an intimidation tactic which police have termed a “preventative arrest”.

I heard the shots and then yells, followed by the sound of a running crowd.

Police have fired tear-gas and stun grenades to eradicate Besigye supporters.  Yesterday, when Besigye was arrested, it was because he received word that an illegal tally center manned by the NRM (National Resistance Movement) were pre-ticking ballot boxes.  Pure corruption is what is taking place here during this time.

At 13:38, there was teargas fired off close to my hotel room located across the street from the New Taxi Park.  I heard the shots and then yells, followed by the sound of a running crowd.  I stepped out on my 3rd floor balcony to see the smoke of the teargas about 200 meters down the street.  The taxi stand immediately began to clear out with mini-vans far from full, which if you have ever been to Africa you will know that this is a complete anomaly.

However, after time more tear gas was shot off down the street and people began to get used to the situation.  When more shots of teargas were launched just out of harm’s way of the mass crowd, people just carried about their day in the streets.  At least five teargas explosions went off through the afternoon and the shots started being greeted with sarcastic cheers from the locals at the New Taxi Park.

We are still under a government shutdown of Facebook, Twitter, Whatsapp.  Now, word has it that CNN has been turned off as well.  Museveni has been the only candidate who has been allowed on television or radio during this time.

At street level in Kampala, it does not feel dangerous, but there is an uneasy underlying issue that one sure can feel in the air.

Results are to come through tomorrow. 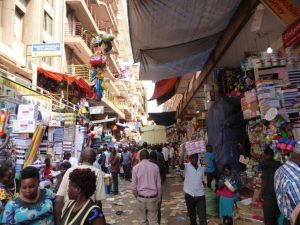 Business as usual in the streets of Kampala. 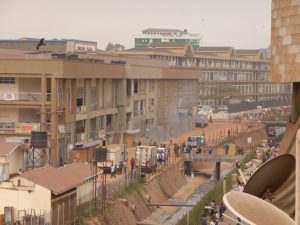 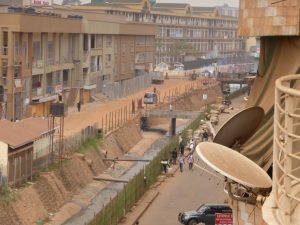 Teargas shot off through the day.

“Maria from Russia told me a story about when she went with her seven-year-old daughter to Syria in 1999 for some kind of religious retreat.  They were on a huge rock with a church to one side and to the other side were other buildings connected with the church.  People left her and her daughter alone at the retreat, but as soon as they seemed to need something, people there would readily help.  Maria said that her daughter stood up and a man came to her to ask what she wanted.  Her daughter said, “Cat.”  She said that “Cat” was one of the only English words that her daughter knew…  A few minutes later the man arrived with a cat that he handed to the daughter.  When the cat would get away, as all cats like to, the daughter would stand up again and say, “Cat.”  The man then ran off and came back a couple of minutes later with another cat that he handed to the daughter.  Maria said there were two cats that were alternated through the day.  She said, “I think all man did for day was catch cat for daughter.””
— Maria from Russia
[View All]