April 29
I woke up at 11:00.  I did not want to get up then, but sleeping is no excuse for wasting the only day I have in Addis Ababa, Ethiopia. 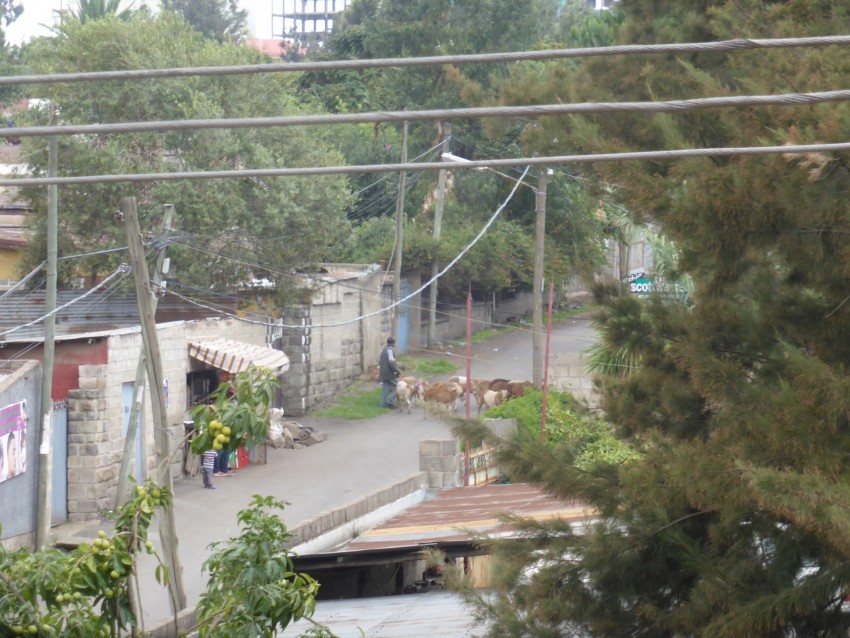 Herding sheep in Addis Ababa, the capital of Ethiopia.

I talked to the guy at the front desk of Global Hotel and asked him how to get around the city.  He told me outrageous taxi prices.  I asked him if there is a local convi-taxi.  He said there was.  I told him, “I have been in Africa for six months…”  He loosened up when he understood that I was not just another pretty boy flying into Africa who is scared of the dark and nodded with, “Ahh, you are cool then.  Okay, yea, you can catch it right outside of the door of the hotel.” 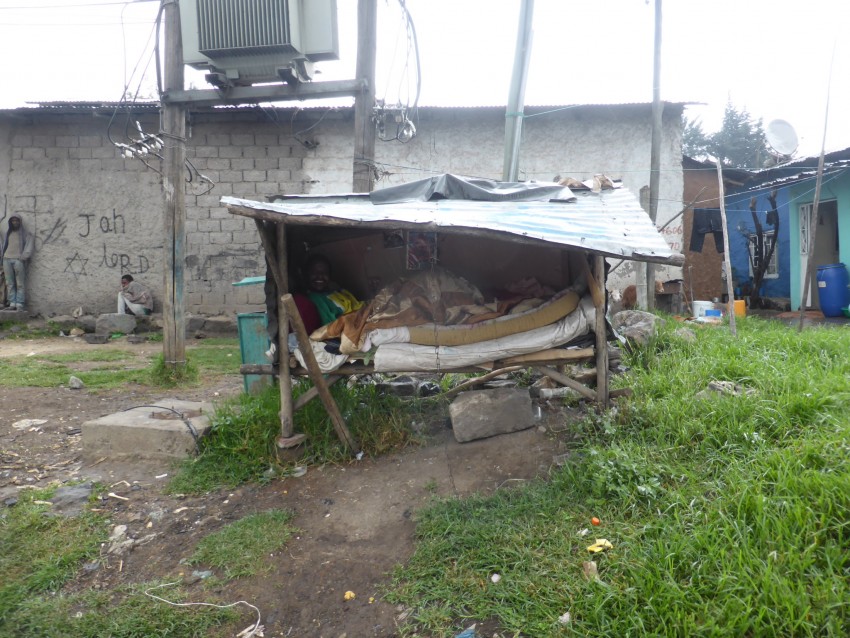 This guy…look at the size of that smile in his shack/bed where he was out of the rain.

Ethiopians have quite light color of skin, and they grow out their hair rather than shave it off.  Women are thin and extremely beautiful with most having flowing hair. As a result the culture is not as wiggy as the rest of Africa I have visited. 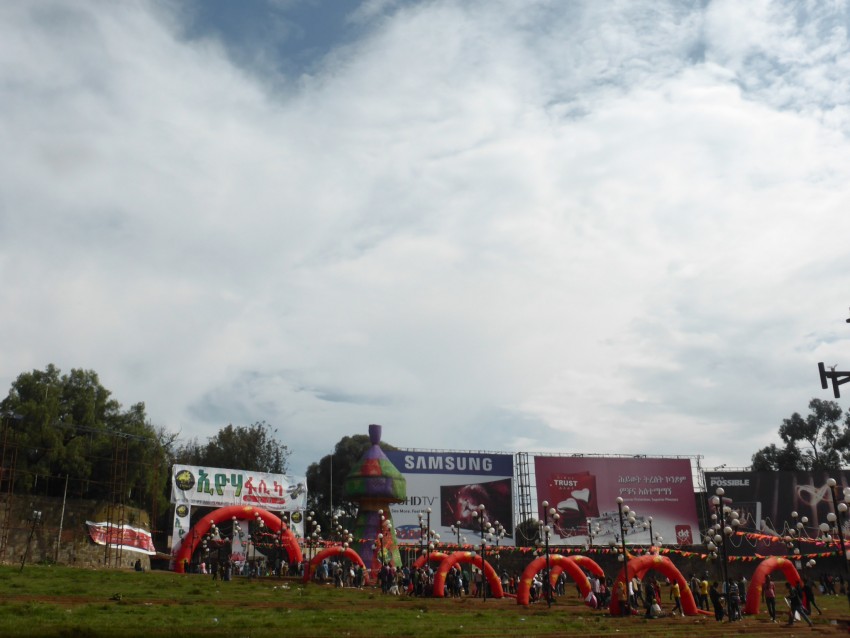 I walked towards an area called Maskel Square where a ceremony exhibition was taking place in celebration of something called Fasika.  I was told it Fasika is the Ethiopian Easter to take place next Sunday (details not confirmed due to very broken English!)  Nonetheless, there was a huge market and a stage set up with drums to play music through the evening.  Walking through wearing my cowboy hat, looking very out of place, an Ethiopian woman stopped me and pondered the word, “Texas?” aloud.  It made me laugh. 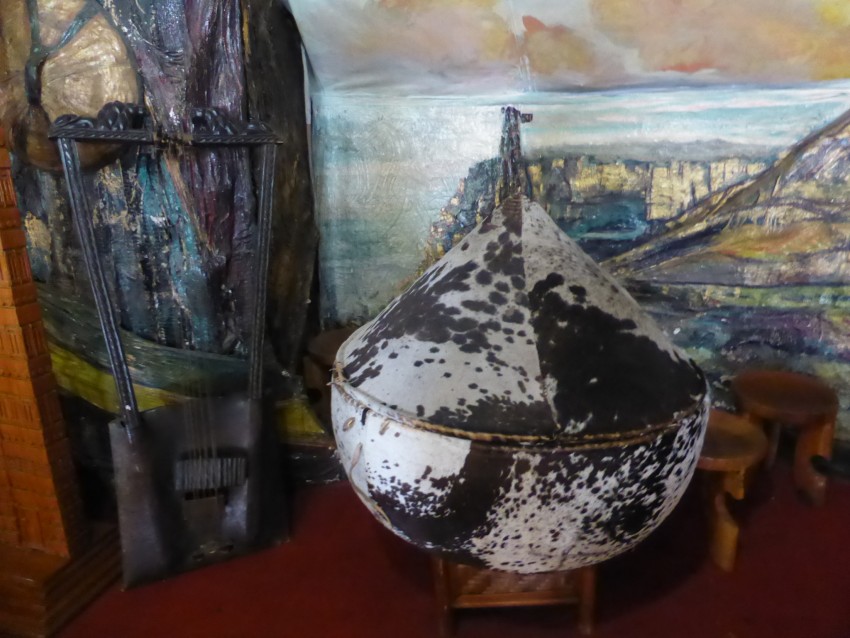 Ethiopia has spicy food.  In a little restaurant I tried something called tegamino (a spicy vegetable paste that went on a giant pancake) for 30 Ethiopian birr ($1.38) and it was more food than I could eat.  I chased the tegamino down with local beer (12 birr = $0.55) and was charming with an older waitress that I developed a crush on because her personality was shining through the entire building.  After she warmed up to me I ended up befriending most of the floor staff who were smiling to come and meet me.  The people in Ethiopia are very sweet. 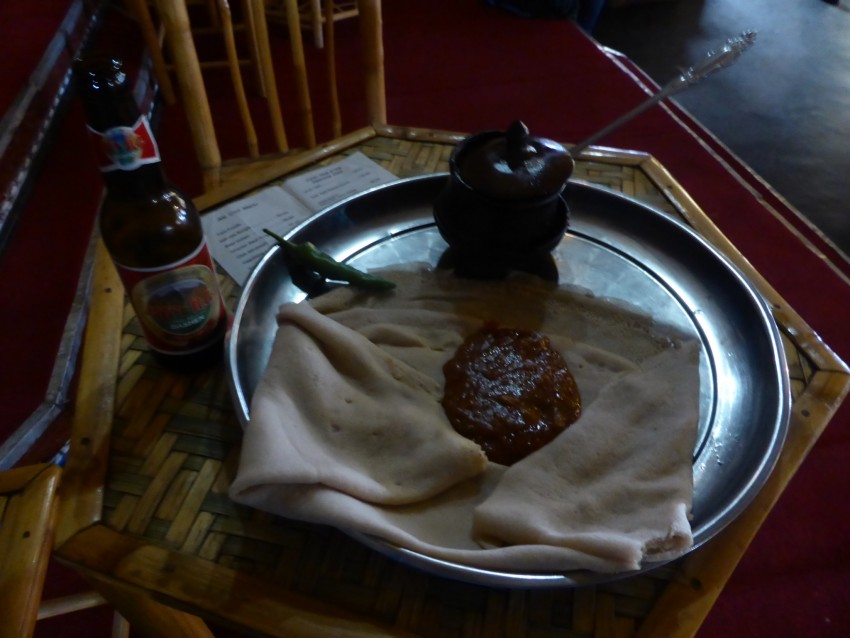 Tegamino (a spicy vegetable paste that went on a giant pancake).

They were brewing local coffee in the restaurant.  I have never had a coffee on the road in 10.5 years, but they were making it on a fire.  It looked really traditional so I felt the urge to indulge.  That jogged my memory caffeine…it is crazy!  It makes me jitter like a wild rabbit caught by a child.  I recently read a report that it is the worst drug in the world… 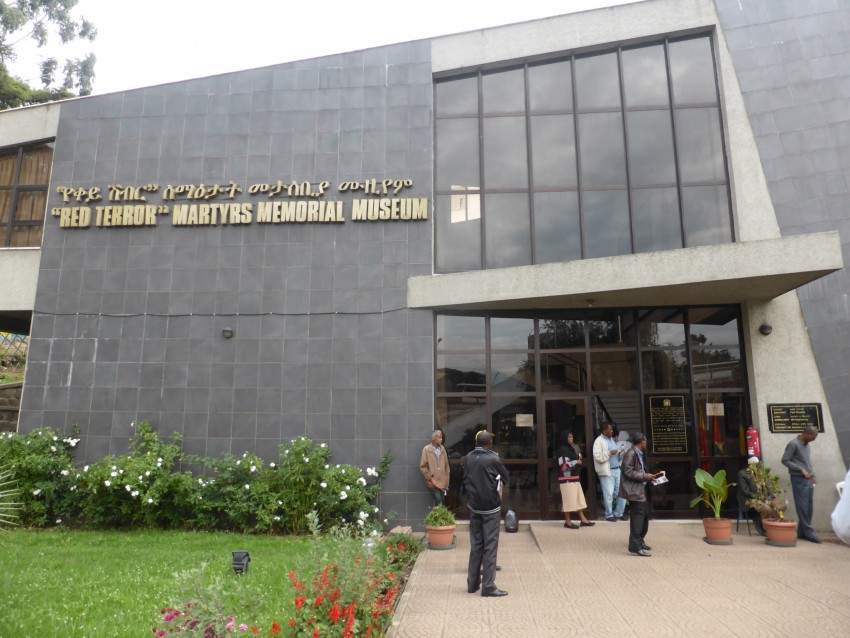 I got a very good lesson at the ‘Red Terror’ Martyrs Memorial Museum about what took place in this country during the 1974 revolution.  In the museum was horror on a scale I, and seemingly most of the rest of the world, was unaware of that took place in Ethiopia for the 17 years following 1974 while half of a million people were murdered in the country. 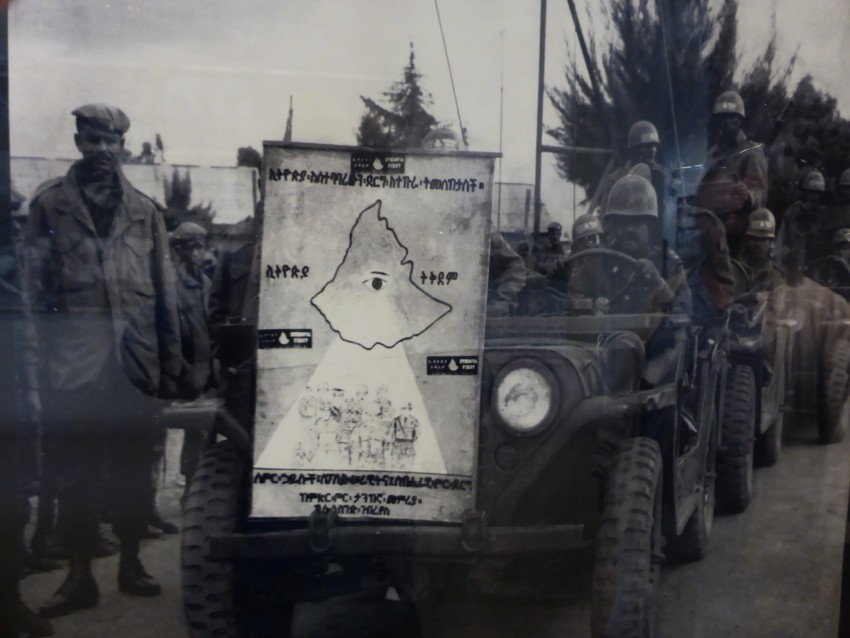 The ‘eye’ watching you…

The Red Terror Memorial Museum had been closed when I arrived at the door because of the holiday, but a man of 68 who runs the museum was happy to give me a history lesson to tell me about what the country survived.   He was a young man in his mid 20’s when a siege of terror took the nation. 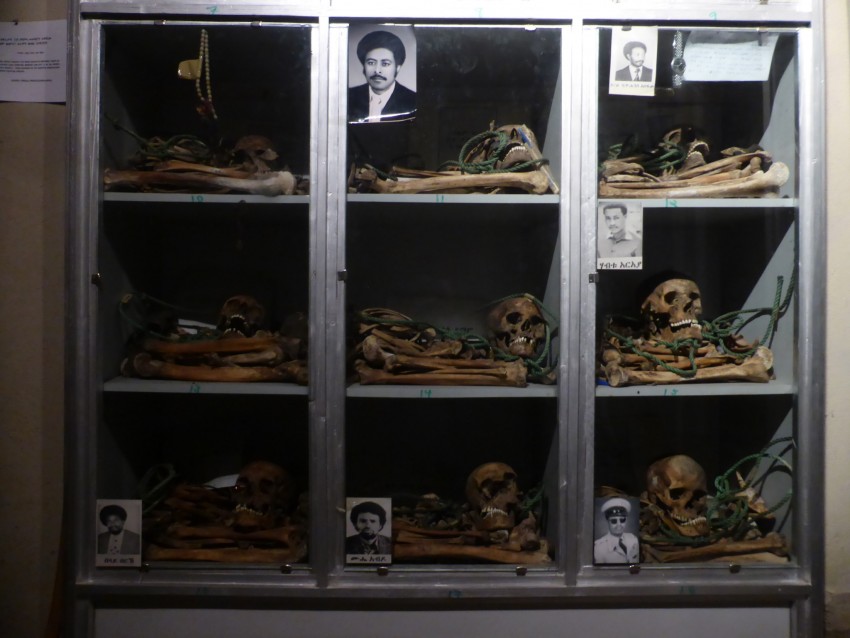 This is pretty horrifying. Possessions, along with the photo and their skeletons. 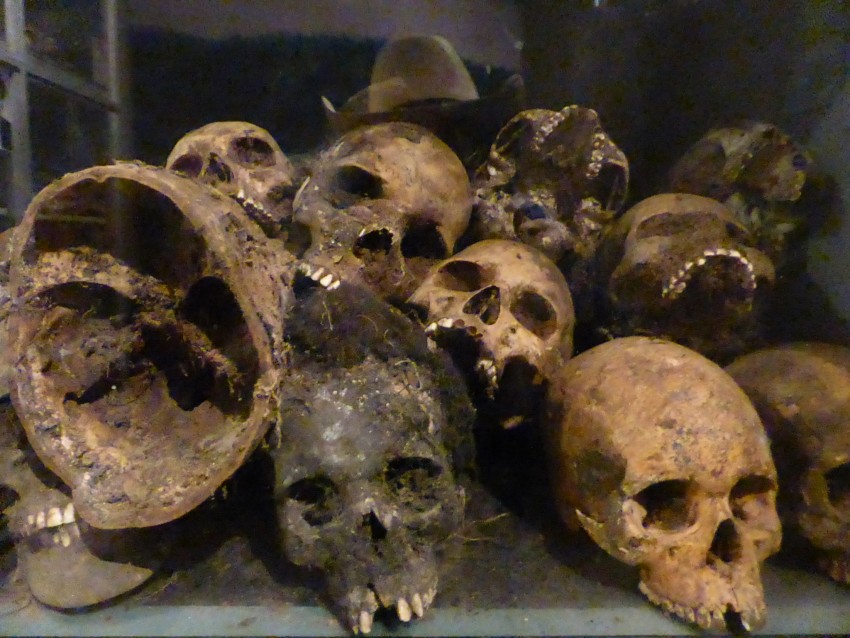 I have never seen anything quite like this. There is still hair on that skull…

The images inside of the building were shocking and moving.  Take a moment to have a look around here at their website…  Humans are horrible.  For a short non-Wikipedia historical overview, click here… 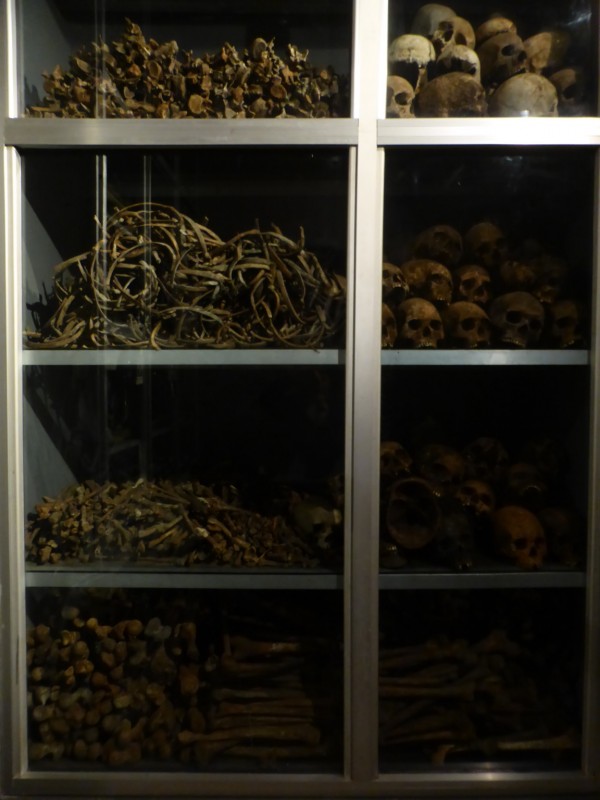 Racks of human remains from the Red Terror.

There is poverty in Ethiopia…

There are very poor people on the streets of Addis Ababa, but adults are not aggressive beggars.  The children however do approach for money.  I had several children come to me as I walked around, trying to grab the bottle of water out of my hand or they would attempt to sell me something.  Poverty is wearing me down in ways that I am not proud of, and my soul hurt a little today…  I was very forceful with my ‘NO!’…too forceful.  I had escaped from two children who were hassling me on the street, asking for money. 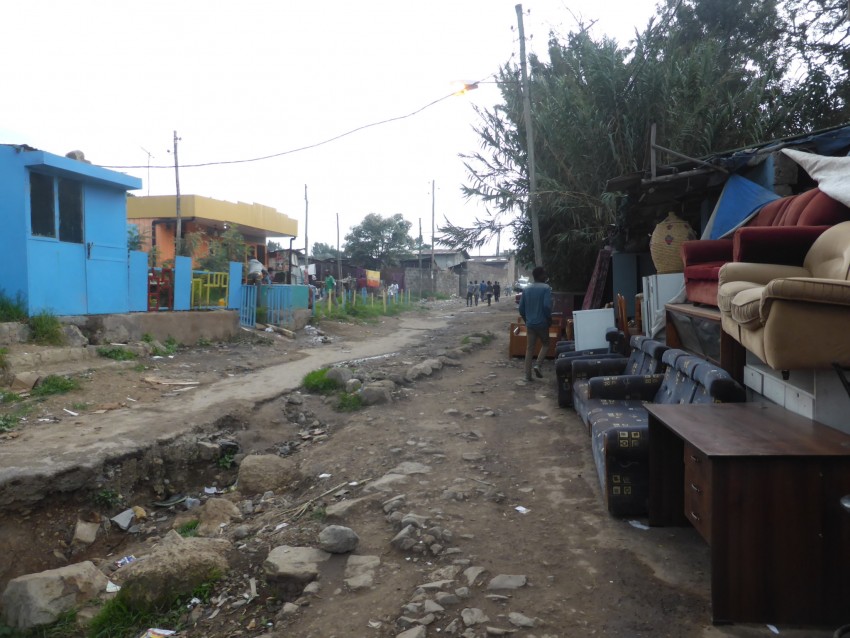 The streets, businesses and residences… Poverty in Ethiopia.

Another child began walking along with me and was trying to sell me something in his hand.  I said, ‘No’ as I kept on walking.  He kept at me and would not let up, so I turned to him and said ‘NO!’ as I went to lock eyes with him to hold his gaze and make it clear that I’d had enough.  I had begun the start of the word ‘NO!’ as I turned to stare at him as the word was coming out of my mouth I noticed that he had a friendly and genuine smile on his face.  Had I seen that earlier I would have never used a speech so strong.  My forceful word and gaze hit him hard.  I watched his smile fall and he stopped in his tracks as I kept on moving.  There was defeat that my forceful delivery had given him.  It hurt my heart and pained me that I had been so cold.  I needed him to stop and to give me my own space, but I feel like I destroyed a little of his innocence.

I need to go.  A situation with a hawker happened to me in South America two years ago when realized I was not as good of a human as I want the world to think I am, and with that I suddenly realized it was time to go.  It was the same thing today.  I need to reset.  I do not like that my empathy and my patience have completely dried up.  It is not the way to travel and interact, no matter who you are dealing with…  Bittersweetly, the flight to London tonight is well timed. 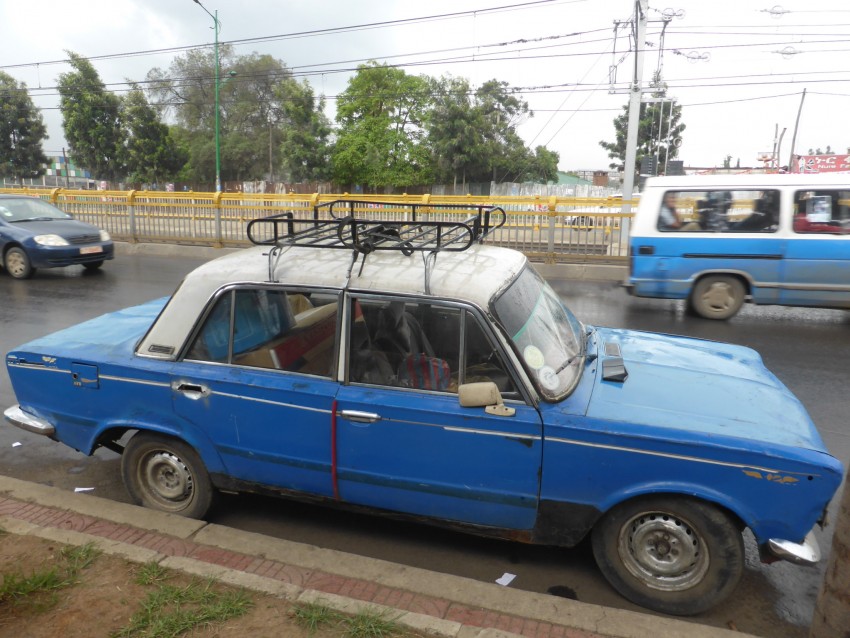 I went back to the Global Hotel where they treated me so well.  I had dinner there, made friends with the guys working in the restaurant/bar and had two beer.  The restaurant staff were disappointed that I am leaving.  It is good because that means that at least there is still a little charm left in me, hiding in a small corner, behind a pillar in my brain!  At 22:00 the receptionist of the hotel called my room to tell me that the bus was ready to drive me to the airport.  Fifteen minutes later I was passing through passport control.

It is over.  I have really mixed feelings about going.

I need to leave Africa, for several reasons.  I need to make some connections for this summer to see if I can chase some dreams.  There are things I am excited about with a return.  There are things I am not going to like once I return.  I can not wait to blend in with a crowd and not have starting eyes on me all of the time, but that means I will no longer have a special means for meeting fascinating local people.  I can not wait to know the real price of what I am paying for everything, but that fixed value is going to be 3-to-9 times the price I am negotiating everything for right now.  It is going to be nice to see old friends who can not seem to wait to see me even though finding a place to stay in London has been difficult because everyone is so busy with their lives, and yet total strangers have been allowing me to sleep at their houses in Africa for the past month.

It is all going to be a huge adjustment.

The airport in Addis Ababa is the second worst I have passed through (after one in Kiev Zhuliany that I visited in 2011).  The Addis Ababa airport is a rundown white building that feels like a warehouse or storage facility.  There are no amenities and there are barely places to find something to eat or drink.  It started raining outside and that meant that it started raining inside of the airport as well even though there is a roof.  I took a one of the plastic trays for scanning baggage and put it under one of the 50 or more drip areas to catch the water coming down from the ceiling.  Then just before I went through the x-ray scanner, the electricity stopped and there was a temporary blackout in the airport until they could get the emergency lights working.  Crazy. 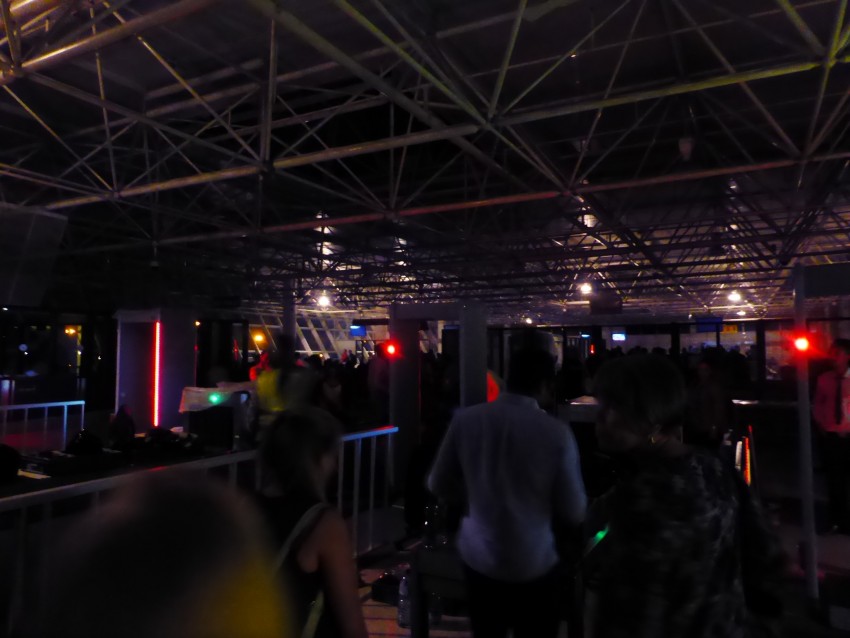 The Addis Ababa airport, with emergency lights after the electrical blackout took place.

I got on my plane and made friends with an Indian man named Akbar who was sitting next to me.  He lives in Burundi and runs a telecommunications company there.  Akbar said the country is not at all the dangers that we are told about and I wished I had met him five months earlier.  He said he is home by 22:00 every night, just as a safety precaution, but he said the country does not actually feel dangerous to with a war taking place.  Interesting…

My friend Akbar also lived in Afghanistan from October 2003 to June of 2008.  When he arrived in Afghanistan two years after 9/11 2001, he said that that Kabul, the capital city, was a lot of fun.  He told me that at that time, the city was cool and it was a party where he would be out until 3:00 or 4:00 in the morning.  Kabul stayed fun until 2007 and that was when things got really bad.  Akbar said you would not want to be there today.  It is fascinating that the capital city functioned as normal for 6 years after 9/11 took place.

That is conspiracy material type of information!

“She is from Japan told me that before she came to the UK, she thought that everyone there talked like people talk on the BBC. She was very surprised when she heard rockstars speaking rather than singing and what they actually talked like. Where was the eloquence? She also said that from growing up in Japan and watching ‘The Wonder Years,’ ‘Golden Girls,’ and ‘Friends,’ she thought that everyone in the US were friends with each other and everyone knew everyone!”
— Edinburgh, Scotland.
[View All]