Well, today has not been easy.

I tried to get through to Hostgator because my website went down.  I tried live chat for 30 minutes and then the website would reset itself.  I tried again for 30 minutes and then it would reset itself again.  I called them and lost the connection.  I called them again and got through.  I talked to a man.  He said the site was working.  I hung up.  I tried the site.  It was not working.

On the way, a logging truck with many men riding on top of the truck passed by.  I took their photo.  Many of the men from the truck yelled at me in anger.  I made an angry face back through a smirk.  They kept on yelling as the truck kept on driving.  An older man on the street said, “Hey Muzungo, they said they are going to kill you.” 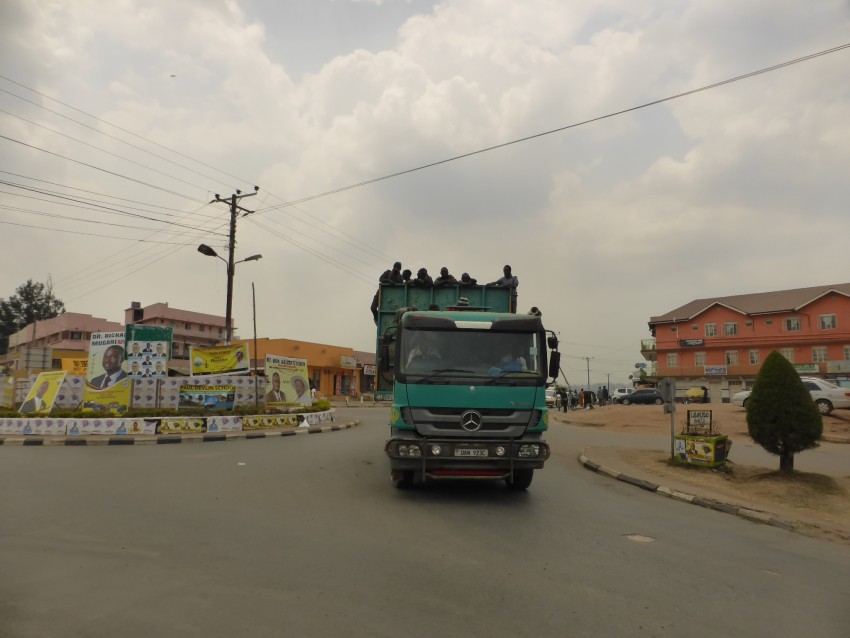 So I came to my hotel room that I checked into in the center of Fort Portal to hang out for a bit.  On the internet I found these two messages…

“I just liked your page.  You have an awesome blog!”

“You’ve got no idea how much I’ve laughed with your posts.  I’m volunteering in Dar es Salaam, and reading your stories is like reading the story of my life.  So good!  What can I say, ‘Tanzaaania, Tanzania…’  My word of advice: ‘Hakuna Matata, shut up and relax’.  Regards from this Chilean girl.”

Those were nice…especially after a death threat…

The internet in Uganda is bad.  It is the worst I have ever found anywhere in the world.  It is so bad that I am probably going to have to leave this country earlier than I had planned.  I know, I know, “First World Problems”,  but it is really difficult to try to run a website when the internet barely allows you to check your messages.  I have been trying to upload photos for four days now, and then last night the website crashed.  It cannot get worse in another country unless internet does not exist there…  It will be a shame to leave a country over something so petty, but, this is what I do… 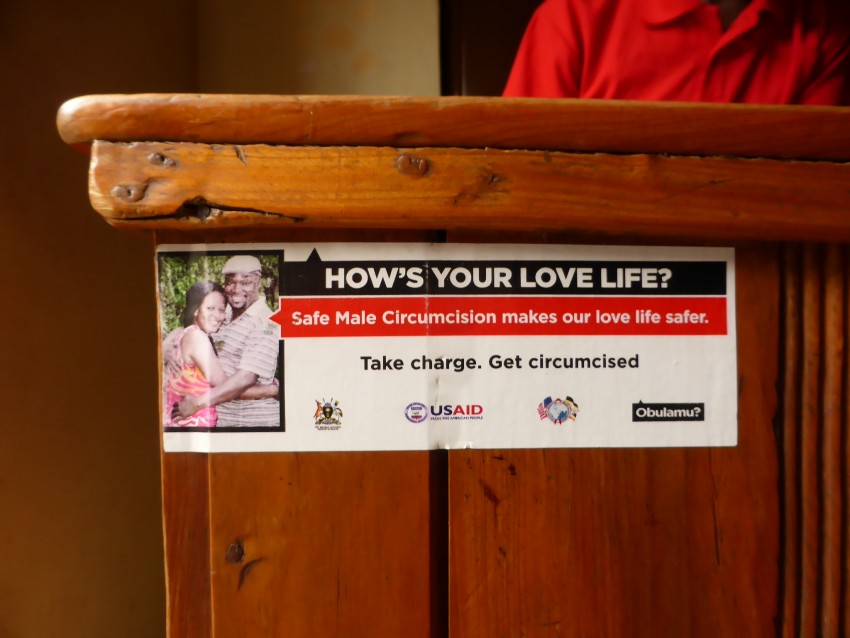 I found this on the counter in a restaurant. Not only is the sticker amazing, but someone actually took the time to make it to make this point…!

I decided to go and see the Crater Lakes that are close by and read that Lake Nkuruba was the prettiest of the group.  So, I went to find a mini-van taxi to take me there.  There was no mini-van taxi, but a man directed me to a car that would haul this foreigner.  When I went to a talk to the man in the car, there were two white people in the back seat who were also going to the lake and asked me if I wanted to split the taxi with them.  Sure…I got in.

A man outside of the car who had been talking to our driver pushed the car to get us moving so that the car would start.  Yes, he push started the car for us.  I have never seen that happen with a taxi before….  The driver bomb-started it and we were off…. 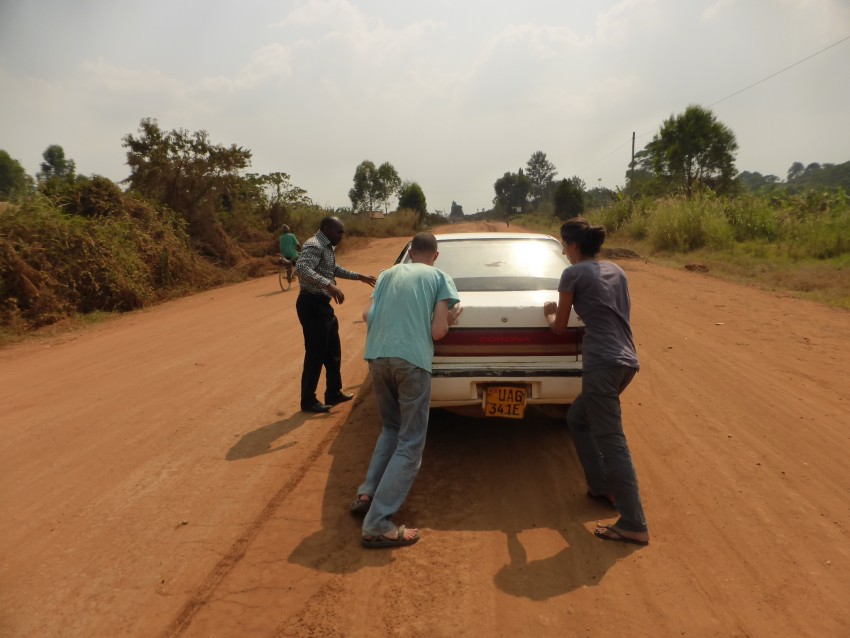 The people in the car with me were from Israel.  We quickly became friends.  After about 10 minutes of driving, our taxi quit in the middle of a dusty dirt road.  The Israelis and I got out and pushed the car to try to bomb-start it.  Nothing.  The car was dead.  Our driver got out and was under the hood.  I got out as well to make sure that I was not of any help, which it turned out I was not.  I watched the driver who was busy pulling off hoses and blowing into them.  Then, he pulled off the fuel hose and nothing came out when he cranked the engine over with the little battery power he had so he guessed the fuel pump had quit.  In a later assessment he thought that it was the timing belt…

When I realized I was of no use, my new friends and I walked to a small shack not far away and I ordered a drink called Romi’s that had a pineapple on it.  It cost me 1000 shilling which is ($0.29).  It turned out to be 12% wine in a beer bottle.  It was taking me on a ride when I was just half-way though it and was saved when a friend of our taxi-man came to tell us he were there to take us to the lake in his car.  I think I dodged a bullet by not having time to finish that drink…

My friends and I were driven to Lake Nkuruba of the Crater Lakes where plenty of black and white monkeys are everywhere.  They are super cool.  I re-named them “skunk-monkeys” because of their appearance. 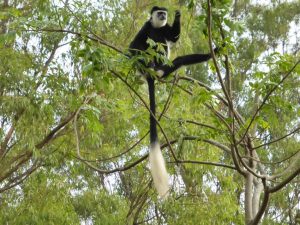 Black and White Monkeys. Check out that tail! 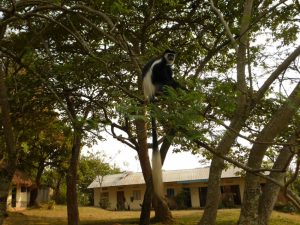 The Israelis and I discussed life and politics down on the water of the very beautiful, but small lake. It was actually no bigger than a manmade body of water on a wealthy man’s property.  I was amazed that such a big deal has been made about such a small lake. 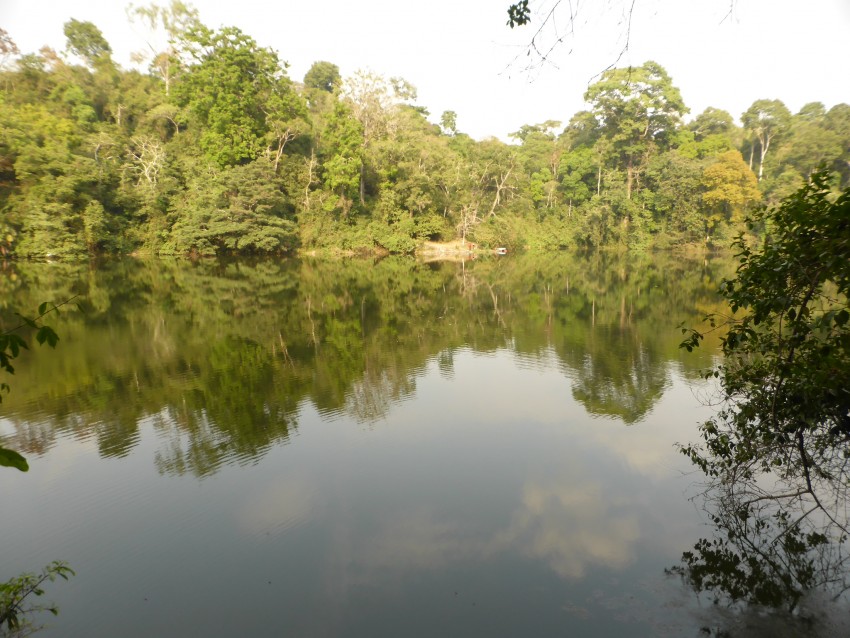 At dark, a motorcycle taxi drove me the 45 minutes from the Crater Lakes back to Fort Portal.  My driver chose to drive as close as he could to pedestrians on the side of the road and he actually clipped a woman with his mirror.  When he was not uncomfortably driving too close to pedestrians, he was tailgating trucks so closely that we would get to breathe in tons of dust.  When we arrived in town, my orange Big Beaver shirt was a shade of brownish-red.  Thanks motorcycle taxi guy…. 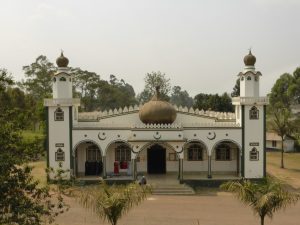 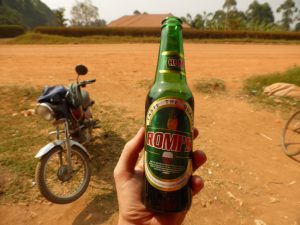 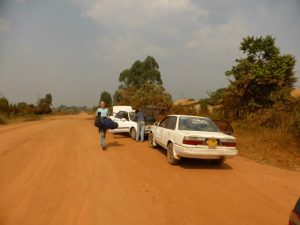 A breakdown on the red-dirt road. 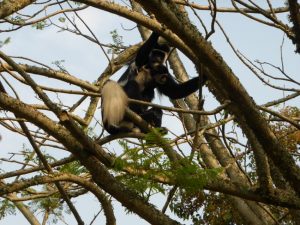 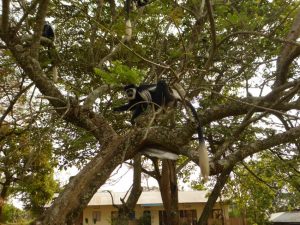 The have ‘old-man’ faces. 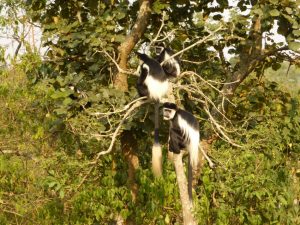 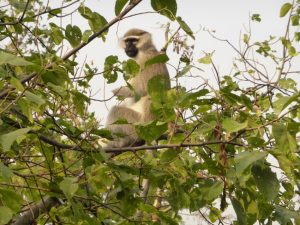 “He told me that they bored a pipeline under the river. They had a 36” drill head on the directional drill to pull the 1.3km pipe under the ground under the river. When they got the pipe out the other side, the head of the drill came out with the pipe attached to it and there was a tooth missing on the drill. He said the tooth is about the size of a hard hat, but it did not come out the other side. So, that means it broke off inside of the bore. That means that it may have scraped the pipe, thereby taking off the coating so that the pipe will not be as resistant to the elements. Or maybe the tooth damaged the entire pipe the whole way through. Or maybe it did nothing to the pipe at all. They do not know. So, instead, they are just going to drill a new pipe in the ground next to that one and the first one will never be used. It will cost them another $1.1 million for material, crew, and job to drill another 1.3km of new pipe under the river a couple of meters from the pipe they already have through but will never use. Incredible.”
— Vermillion, Alberta
[View All]