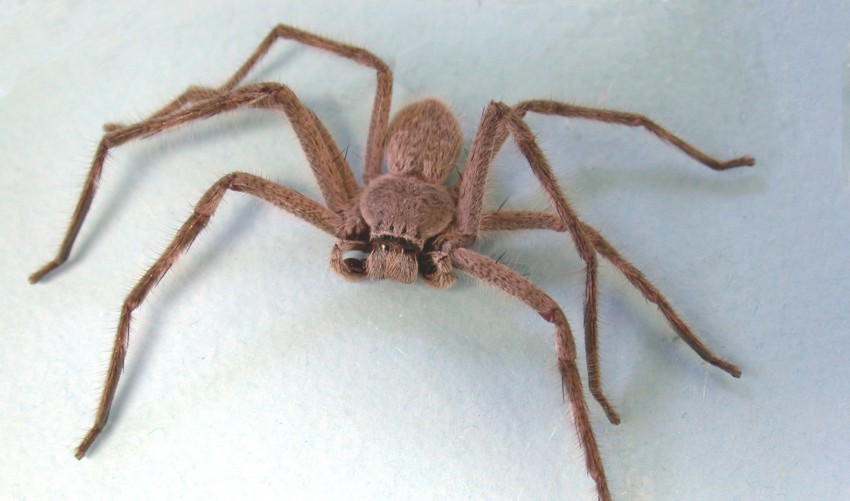 She had just finished giving me an ice massage to try and alleviate the itch from the rash covering my upper body.  In preparation for sleep, I positioned myself comfortably in the bed just before she was ready.  By chance, she turned on the light for a moment.  I recognized the ‘click’ sound in the instant before the light filled the van.  Suddenly my girlfriend said, “Oh my god Stephen.  Oh my god…  Stephen?  Oh my god…”  I was laying on my side with my back to her.  “What,” was it now?  I was just closing in on shutting down.

“Stephen?”  I turned over and looked towards where her finger was pointing.  An alien dark splotch was right next to the side of the light where the switch was located.  I put on my glasses.  Holy fuck!  There had been no exaggeration in her voice at all.  Next to the light, 10 cm from where she had just put her hand to turn it on was a huge dark spider that was about the size of the palm of my hand.  Fuck!  This was trouble…!  Quick assessment…  Fuck.  I was going to have to handle this somehow.  Fuck.

I reached for my underwear to put them on, keeping an eye on the spider that was luckily not moving.  What if she had put her hand on it without looking?  My brain was working very fast.  I was the man, and there was a massive spider in the van.  That automatically made me the resolver.  I knew my role.

She shifted to my side of the bed, as I was formulating a plan.  There was a 1.5L clear plastic water bottle on the counter at the end of the bed.  I quickly cut the top half off of it with our ‘everything’ knife and had the bottom half of the bottle in my hands.  “Okay, here is how I am going to do this,” I explained.  “I am going to cup it against the wall inside of this bottle.  Then I will take and slide the notebook in between the wall and the bottle to trap the spider inside so that I can carry it outside.”

I was beyond stressed.  I had no idea what this thing was.  I am a farm-boy and I am not really afraid of anything, like the dark or snakes or bugs.  But, I had never seen a spider this big before, and so many things in Australia can kill you, and as far as I knew, a bite from this monster might be one of them.  ‘Death by spider’ was not how I wanted to go…  I had the bottle in my hand.  The spider had not moved.  I asked Nadine if she was ready.  She was.  There was tension in the air and I was scared.  I went for the spider with the bottle in my hand, but when I went to trap it, I did not drive the bottle hard enough, wussing out at the last second and hesitating just long enough for the spider to figure out what was going on and move out of the way in my mid-swing.  When I trapped the bottle against the wall, it made a “Bang” but the spider was already on the move.  My mind shrieked, ‘Please do not go under the bed where all of our storage is and there are so many places to hide.  You will disappear and we will never find you and we will never be able to sleep in here again…’   The spider heard my mental plea and headed across the wall, past the curtains to the driving area where we could no longer see it.  That was the best case scenario of the worst case scenario.  At least we should be able to find it in the front of the van.

I told Nadine, “Okay.  Here is the deal.  I need help on this and I need you to help me.  You have to be strong.”  She nodded.  She was a solid teammate.  “You’re ‘the light’ okay?” and I handed her the power-lantern.  She was cool.  I slowly reached past the curtains to unlock the front doors on both sides of the van.

We exited the van through the back door and came around to the side of the passenger door.  It was raining outside…  How perfect…  I was armed with a kitchen knife in one hand and a small towel in the other.  I opened the van door very slowly and swung it all of the way open while mental terrors played a horror movie in my head.  I was afraid to stick my head inside the vehicle for fear that the spider was going to jump from the inside of the roof, directly onto my head, would bite my face and then run away and I would die from the bite.  Nadine was right behind me, over my shoulder with the light in front of me.  She was brave.  I slowly stuck my head inside of the van to look around.

I scanned on the roof.  I scanned the dash.  I looked where the driving gauges were.  I looked on the seats.  I looked on the edge of the door.  Something caught my eye just above the passenger door frame.  There it was…  I walked around the front of the van and gently opened the driver’s door as far as I could and walked back around to the passenger’s side.  Nadine was ready with the light.  I did not know how to shoo the spider outside without it falling on the seat and disappearing who knows where in the van.  I traded the towel for our very thick Campers Guide Road Atlas that was on the dash.  “Okay,” I told her, “I am going to jump across the seat and smash it with the atlas.”  The kitchen knife was in my left hand and the atlas in my right.  Nadine held the lantern so that it shone the best it could on the upper door-frame where the spider lingered.  I went for it.  I dove across the seat and I swung the atlas at the spider’s location.  The atlas hit with a ‘smack’ and as the sound was still in my ears, I heard an “Oo-uguguauahaa” groan that I realized had involuntarily emitted from my own throat out of terror as I watched the one-half smashed spider that was partially crushed, dropping down at a slow speed from a thread of web that it had attached above the door-frame.  I swung the kitchen knife to try to flick the spider out the door but missed it, the thread broke and the spider fell down inside the van.  Fuck.  Fucking fuck!

I found a pair of gloves and quickly used the kitchen knife to begin rummaging about through everything lying around on the floorboards of the van.  A backpack was there on the floor and I zipped it up, hoping that the spider was not inside where I would only look after I had exhausted every other effort in my search.  I poked around the books.  It was dark and I was intensively hunting, but the anxiety was killing me as I was terrified to touch anything.  I was afraid to walk over to the other side of the van for fear that as soon as I got close, the spider would pounce onto my sandaled foot out of vengeance, bite me, and I would die.  Finally, there was no choice except to go around to the other side.  I had the lamp and when I got around to the driver’s door, there it was, mangled on the floor of the van, attempting to drag its half paralyzed body to safety with its other four legs.  Relief…  The spider stopped moving when it seen me.  I called Nadine to come around because I knew that she was going to need evidence if she was ever going to sleep again.  As I moved my light a little closer to the spider to show it to my girlfriend, the creature moved and fell out the door of the van and onto the ground.  I slammed the door shut and Nadine and I ran together around the van to get into the other door that we slammed shut directly behind us.  We crawled across and over the seats to get to the bed where we sat and hid in the comforts and safety of our van.

Stress relief.  We searched the van for any other spiders.  There were none, thank goodness.  Nadine shut the light off and we tried to lay in bed again after it was all over, barely flinching at the 15 mosquitoes that had entered the van and were buzzing around us in the dark.  We were both very spooked and I spent the next few minutes convincing and explaining to my girlfriend that spiders always travel solo, hoping that my guess was right.  We were completely wide awake, lying there, when she asked me, “Stephen, is it okay if we move the van to another place to sleep for the night?”  “Let’s go!”  We got up, turned the light back on, pulled our extension-roof down, opened the curtains and jumped from the bed to the front seats of the van so that we did not have to go outside.  When the van started, I turned on the headlights and drove us down the road to look for another rest area to sleep, terror gripping every thought in our minds.