Nov 18
Baja California Roadtrip, San Ignacio to Todos Santos.
It can be scary, riding shotgun across Baja, Mexico, with a girl who nearly runs a stop-sign in a town and then nearly rear-ends a truck slowing down for a speed-bump…all within about 30 minutes.  But, you make due, try not to pay attention, and you seem to get through it.

Kristen says she needs coffee to start her day.  Noted!  We’ll for sure get that sorted out tomorrow morning! 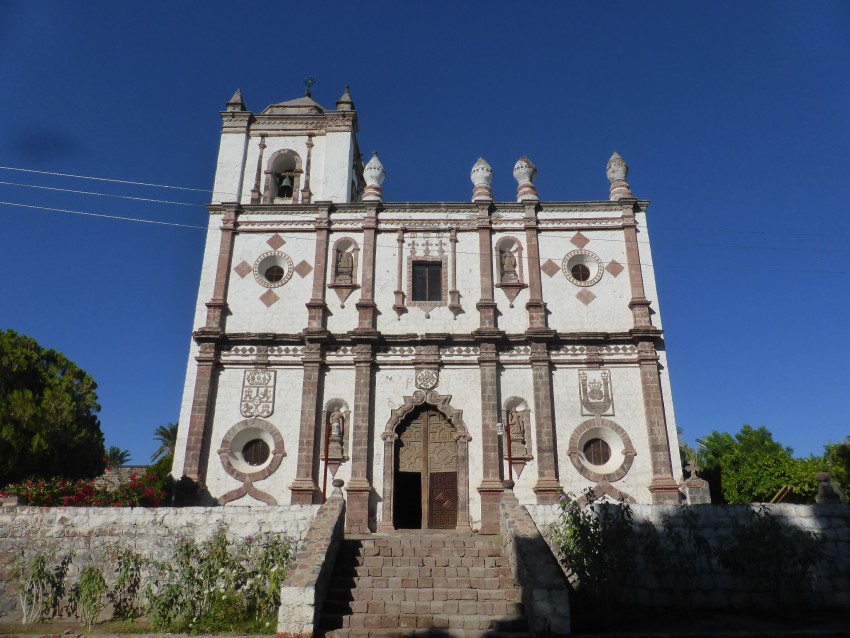 Mexico is mountainous roads with trucks, cars and semis half-way-to-somewhere, on the side of the highway with a Mexican man bent over an opened hood, inspecting something and trying to mechanically comprehend what he can do to no longer be stopped on the side of the road. 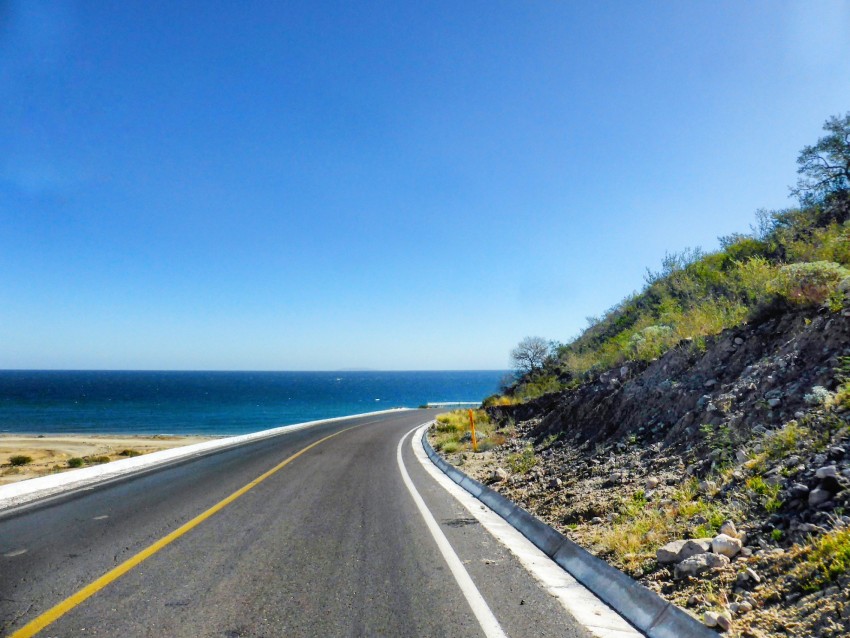 I ended up behind the wheel for our Baja California Roadtrip from about 15:00 and drove for the next six hours through Baja Sur.  The drive past Bahía Concepción is remarkably beautiful.  The colors of the ocean are so gorgeous how they morph into different blues from ‘turquoise’ to ‘deep’ as you dive past on the highway. 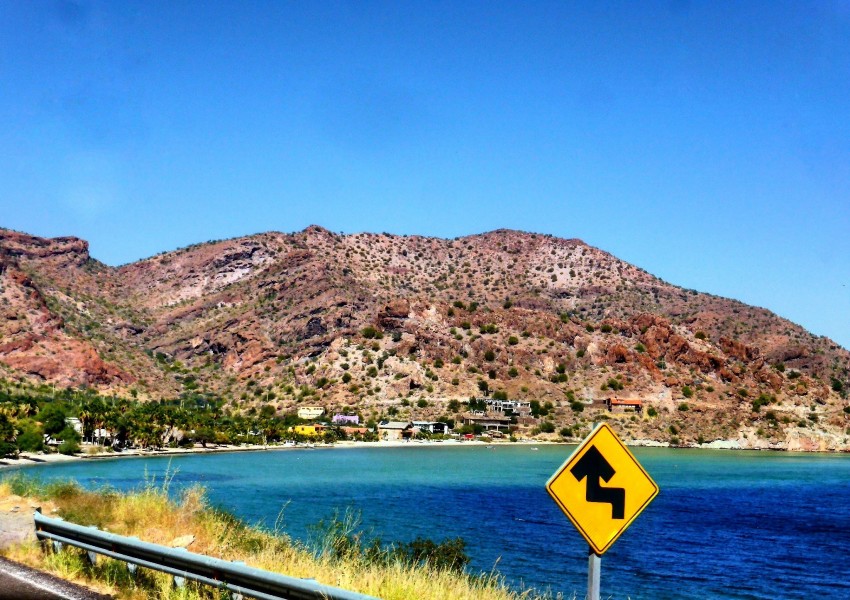 That cove. I want a home here! Look at those colors!

Everyone has been telling us to not drive at night, but sometimes it is not preventable.  Plus, it gets dark at about 17:30, and you need to use those hours into the evening if you are going to get anywhere.  This is especially true when you are like me and: the idea of going to bed at 05:00 means you found more mischief than you intended to for the night and you probably regret it so you dislike 05:00 for finding yourself approaching it, but in total contrast getting out of bed at 05:00 to start at the beginning of the day still feels like it should be last night and you dread it as much as a finding out there is no hot water for the shower.

I disapprove of finding myself awake to see a clock saying 05:00 at any direction I meeting it.

Therefore, we have not been getting incredibly early starts.  I am up by 08:00 and usually wishing it was 09:00.  I am not sure who designed the current model of efficient time usage, but I sure wish someone would revamp the system. 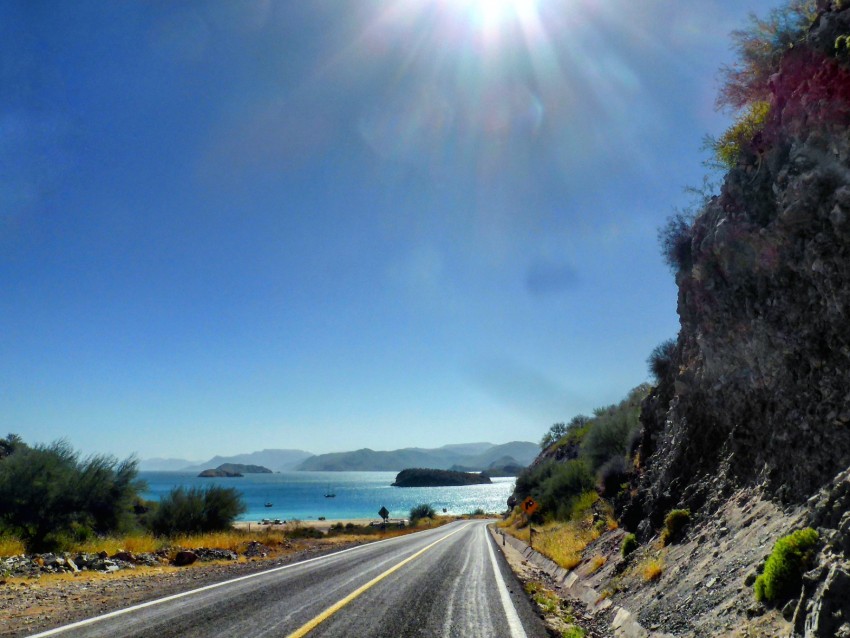 Driving during the day, so as not to miss this! 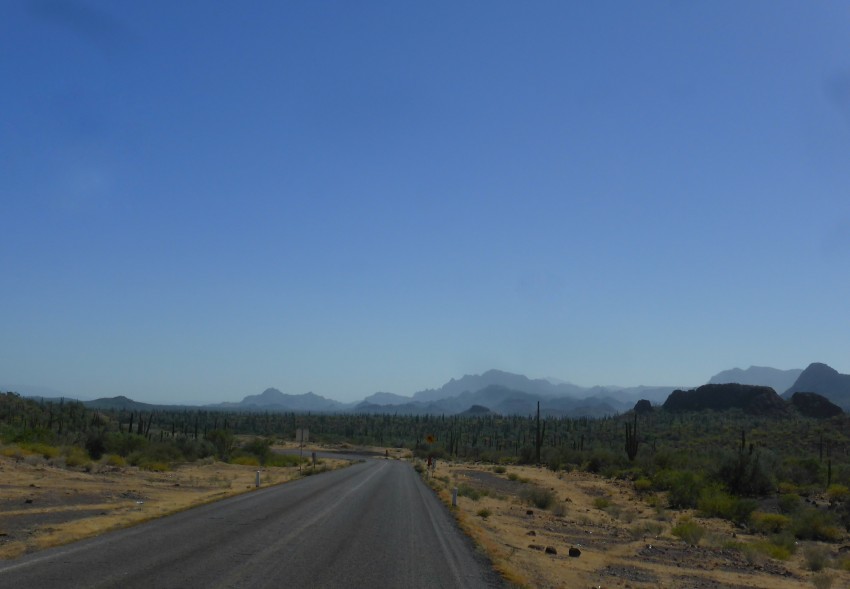 The Baja desert. The mountains look like mirages of each other.

We arrived in Todos Santos at about 21:00.  A chart we had been paying attention to for the whole drive showed that Tijuana to Todos Santos was 974 miles.  I estimated that we had deviated about two miles out of our way on the entire Baja California drive.  When we arrived at the Todos Santos town limits, the odometer that we had reset in Tijuana showed that we were now at 976 miles.  There were the extra two miles!  Unbelievably accurate.

In about 1,500 kms of travel, the mileage chart
and her odometer were in line to the exact mile! 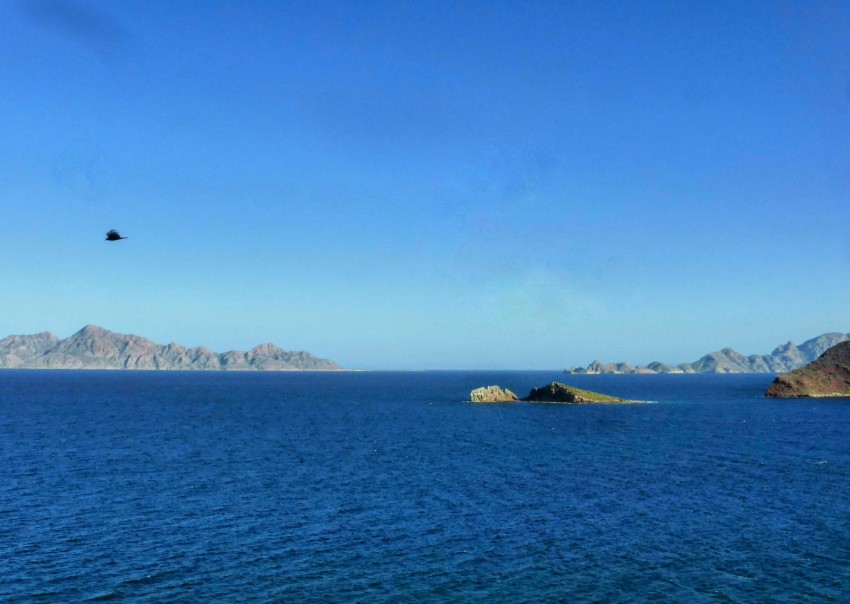 There has been a lot of blue in this post. It is impossible to not overindulge in photos here.

We found a hotel in Todos Santos called the Maria Boutique which would accommodate dogs.  The price was $27 for two humans and two pooches.  I did the negotiating completely in Spanish.  I am getting pretty good at talking hotel business in this foreign language and I get freaking excited when I do it and kick ass at it!

Kristen said hotel might have been the worst she has ever stayed in.  I thought it was one of the better I have been to.  We live different lives…

“As I got just past Medicine Hat, Alberta, there was a guy standing on the side of the road, thumbing a ride. So, I stopped and got him into the car. He said his name was Michael and he was on his way to Swift Current, Saskatchewan. Michael told me that he has been clean from crystal meth since November. He quit cold-turkey, so instead of being in places of temptation, he hitch-hikes all around Canada and sleeps in the Tim Horton’s which he knows will allow him to stay. He said he woke up yesterday morning in Brandon, Manitoba, hitch-hiked to Medicine Hat, Alberta, slept in a hotel that an organization paid for, and now he was on his way to Swift because the Tim Horton’s there will allow him to sleep. He now wants to be a minister in a church. By staying on the move, Michael is able to hide from his meth demon. Five minutes into the drive he told me that he was tired and asked if he could sleep. I told him to make himself comfortable. He was snoring in about 90 seconds. I dropped him off in Gull Lake a little while later.”
— The Meth-Quitter Coffee Shop Hider
[View All]