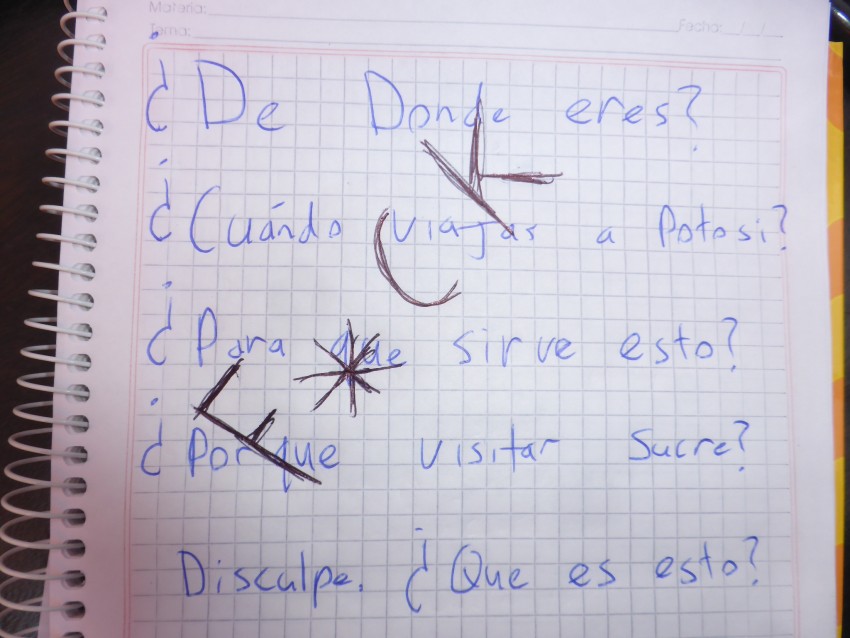 Learning Spanish is not easy.

It has been a long time since I used my brain.  Today all that changed.  I had my first Spanish lesson.

It was three hours of driving a language into a muscle that has been on autopilot for about four years with no new heavy lifting in the meantime.  It is amazing how much the action of shaking up the language section of my brain alters my whole mind.  Weird sentences from learning French in the 7th grade show up on the tip of my tongue.  I mix German vocabulary in with Spanish conjugations that I try to create.

Being a unilingual moron has been a real walk in the park up until now.

Today was nearly a Brain Implosion.

I do not seem to be designed to be able to take on a new language.  Or maybe I am just designed to be a lazy English speaking prick.  Opportunities have presented themselves to learn languages for the past 8.5 years, and I still only have about a 284 word vocabulary of combined languages in my head.  But, I can make a language excuse like no one I know.  I lived in Korea for 17 months.  I could say ‘cheers, hello, goodbye, thank you and toilet.’  Oh, what good is Korean for me once I leave here.  I could also tell a taxi driver when to stop, turn right or left.  That was my Korean language.  I even had a Korean girlfriend.  I remember meeting a Japanese man in Laos who asked me if I could speak Korean after all that time.  I told him no.  He said, “What a waste.”  I nodded in harsh agreement.

So, then I got a German girlfriend for the next four years of my life.  She sure could speak English well the last time we talked, but I can pretty much only speak ‘Porn German’ as I really have great grasp on the dirty words, because the rest that I learned came and went.  And the ‘went’ was not really a lot for four years of time and girlfriend-pressure to learn.  I am just so busy with everything right now that I just do not have the time.   The lazy unilingual moron.  I have had about five years of English second language girlfriends, and I only have this 284 word vocabulary and some precious memories to show for it.  What a ridiculous bunch of bullshit.

Spanish, I am going to put in a honest run for you over these next few days.  I need you.  I need you for survival and I need you to prove that I can break this non-capable language mold that I wear so well and seem to actually love.  My head pounds from today.  A Brain Implosion is a reality.

p.s.  The highlight of my day today was when we went to the market for fruit smoothies.  The woman making the smoothies, Carmen, was about 50 and missing half of her teeth.  She was sort of flirting with me asking my questions about my life.  I told her that I need a Spanish speaking girlfriend and asked her if she is married.  She told me that if she can get a divorce, she will be my girlfriend.

“The landscape just outside of Gaborone stays nearly the same for the entire drive as you pass though the Kalahari dessert.  There are small villages along the way through the barren land and not much else.  There is no mobile phone coverage for most of it and the bus driver has to keep his wits about him as he brakes and swerves around so many cattle and donkeys that seem to be under the impression that the highway is theirs for lounging.”
— Life in Botswana
[View All]