April 11
When I woke up, breakfast had been prepared for Julia and I on the terrace outside of the rooms by Lala, who runs Loubser’s Bed and Breakfast.  Awesome!  Julia and I ate and then I kissed her goodbye before she raced off to catch a flight to Bali.  I started getting myself ready when my rental car arrived.  Yes!

Now, I had been to Avis, and they had a car for me for 552 Namibian dollars ($37) per day, but Lala sorted out a car for me for 330 Namibian dollars ($22) through a man that she knew.  The man dropped off a VW Polo and just disappeared without even meeting me.  No contract to sign.  No questions about my license.  Not even a visual of me.  Nothing.  Just a car delivered to me with no required identification on delivery.  That is pretty trustworthy and cool!

So, I departed from Namibian mom (Lala) and Namibian dad’s (Francois) house in a right hand drive car on the left hand side of the road.  I have been almost exclusively in right hand drives since I got to Africa, but I have been the passenger.  I got into the driver’s seat today and it was weird to drive from that side.  I drove that way for 18 months straight, but that was seven years ago.  So today it was strange and felt sinister, like a weird nightmare where things are somehow all backwards and uncomfortable.  But, unlike when I first tackled a right hand drive in Australia, my adjustment period this time was only about 10 minutes. Within an hour, I had the act down again perfectly.

Parking lots always really throw a person off because they do not really have rules.  Parking lots were always the chink in my armor even after months of driving on the left-hand side in Australia and New Zealand.

I loaded up with food and was on my way.  I stopped in a town called Henties Bay, where I entered a supermarket for a stretch and some junk food.  A cute local girl behind the counter told me that she liked my hair.  I told her that I grow it myself and that I liked her.  She asked where I lived.  I told her mostly Europe.  She asked, “Don’t you want to take me with you when you go back?”  I told her that I was on my way to Terrace Bay, and that maybe we could start there and see where things went after that.  She was laughing.  After I finished paying, I asked her if she was ready to go.  She just giggled at me.

I am something of a wreck again because I have had sex recently and now every female I see has something attractive about her so I am super flirty and charming with all…  It is crazy how it works like that…  I had been well behaved for a while now and though a man never forgets how great all of that feels, he sort of forgets little specifics of the greatness of it.  It is always on his mind, but as times goes by, he sort of gets used to having his foot off of the gas and does not hunt.  But, with a fresh safari in the past day or two, the desire to hunt again is overwhelming.  People talk about lucky streaks, but luck has nothing to do with it after the first time.  It is all about what gear your mind has shifted into…  I am in overdrive right now…

The cute cashier knew that I knew that she had to work, so we smirked at each other as I left the supermarket… 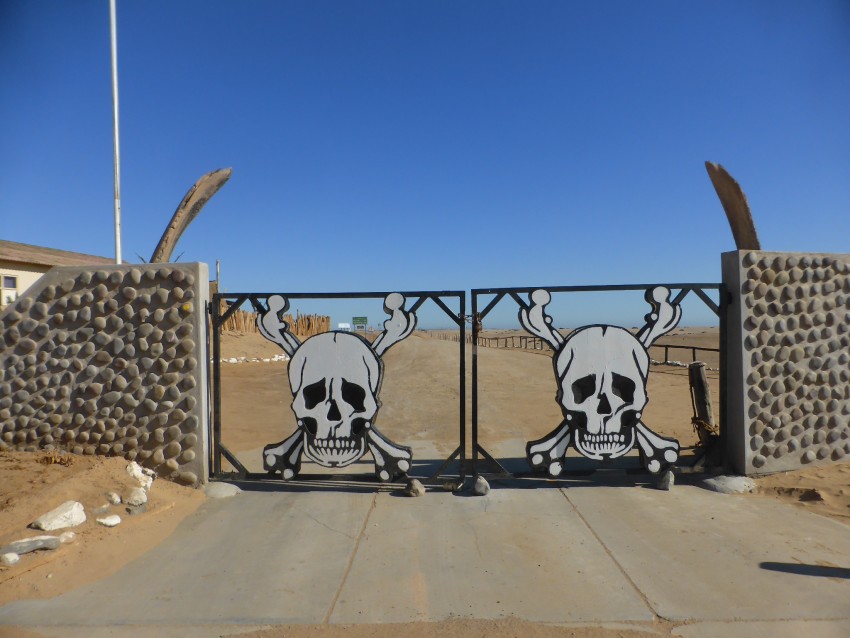 The highway is great all of the way from Walvis Bay to the Ugabmund Gate at the entrance of Skeleton Coast National park.  It cost me 90 Namibian dollars ($6.11) to get me and my VW Polo through the gate with giant skulls painted on the gate.  Awesome!

Through the gate, and fifteen kilometers up the now-gravel road, was the ‘South West Seal’ shipwreck.  She was a priority of what I was looking for in the park.  The sea is trying to take the boat back and dismantle her.  She has been laying there since 1976, but most of her is gone.  She looks like a dinosaur that someone has unearthed and all that is sticks up is her rib cage.  And, she is beautiful for it. 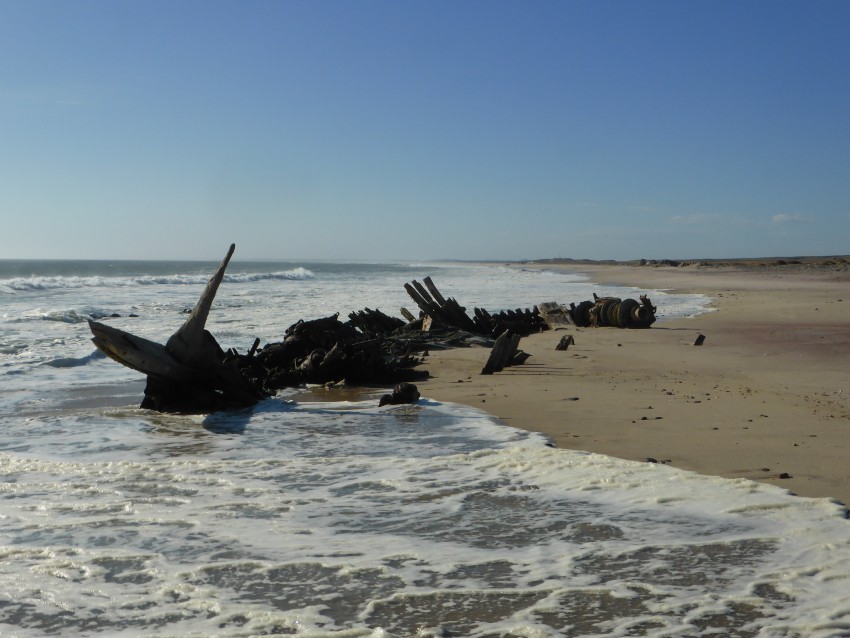 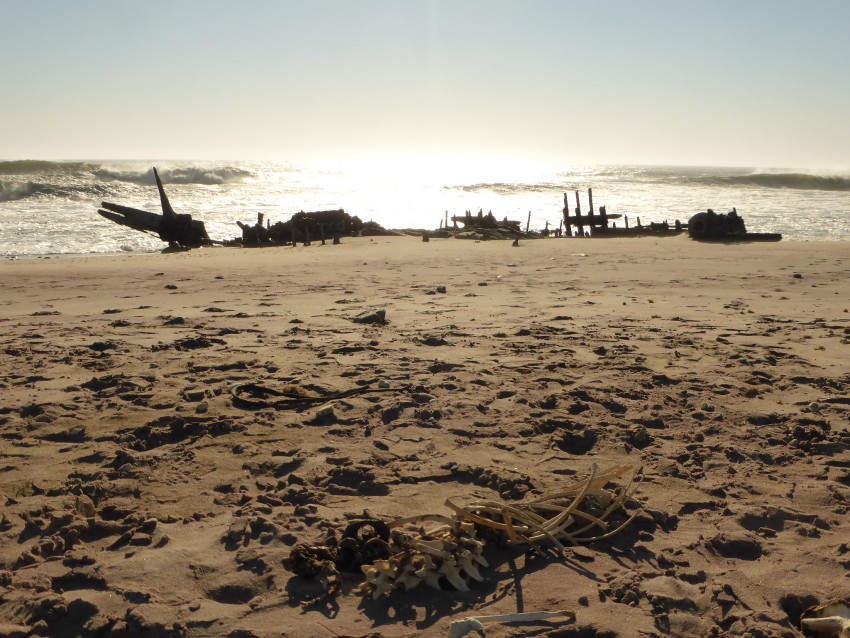 A little further up the road is the ‘Old Oil Drill Rig’ laying on its side that was abandoned in 1972.  It seems to have collapsed, as if the hostile and lonely conditions of nature on the Skeleton Coast did not want man drilling for riches here.  The rig is glorious in scrap metal destruction.  The salt of the sea has eaten so much of the metals of the rig that it requires extreme caution to climb around.  A sandstorm that was taking place decided to pelt me as much as possible in all parts of my exposed skin for having the audacity to get out of my car in such a place where it was taking one of man’s failed projects back. 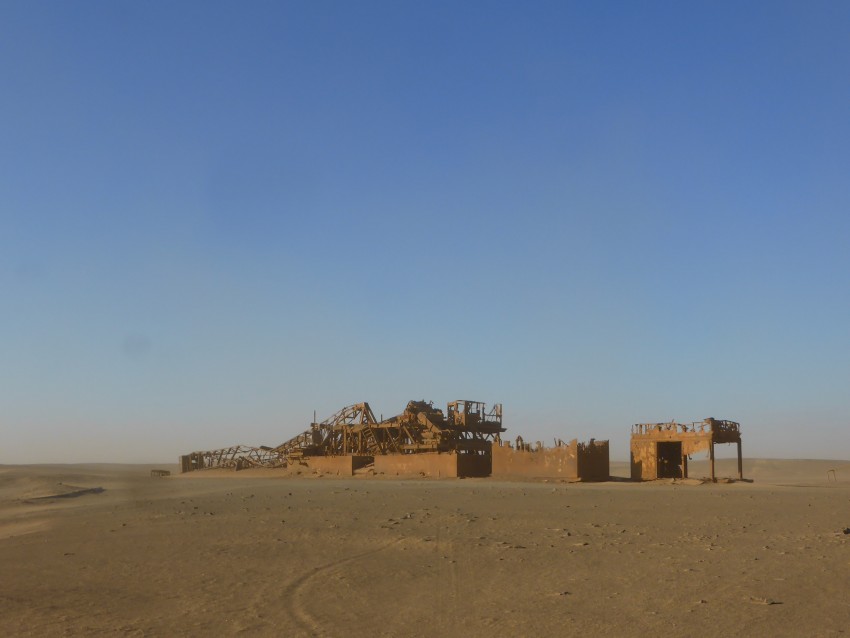 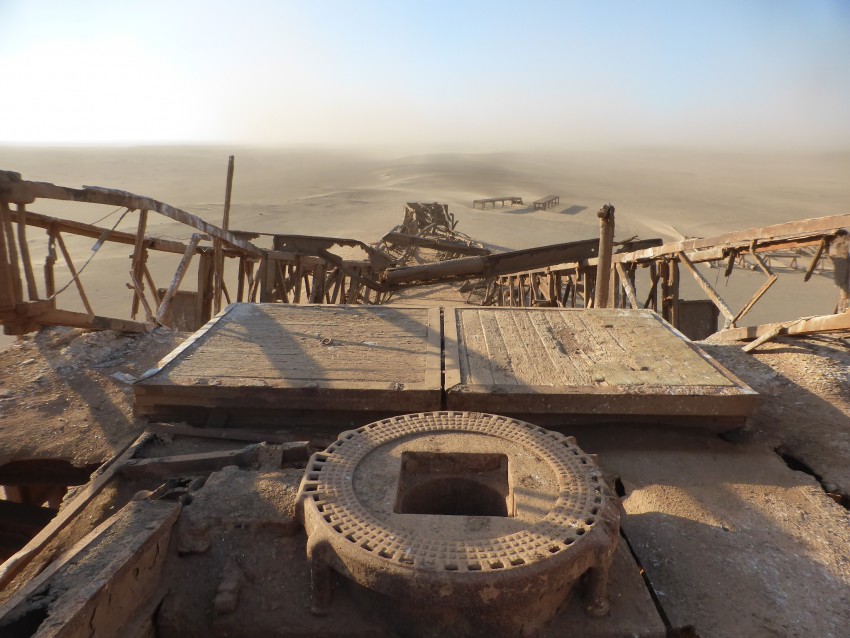 There the Old Oil Rig lays to be taken back by the elements.

As I got back into my car, ‘Desolation Row’ by Bob Dylan was playing on my i-Pod.  Sometimes I wonder if life is a written script…

The colors of the land and the sand are overwhelming.  I got a really good and close up inspection of them about 90 minutes of driving later when I heard a very loud noise and feared the inevitable.  Yep, I had a flat tire in the middle of the desert just as the sun was setting.  I was about 2 kilometers from seasonally abandoned Torra Bay but no one was around for miles.  I changed the tire and noticed that there was only one bad tire on the car of the four of them, and it was the one I had just blown.  So, the man who rented me the car was going to end up with a new tire for the bad one that he had left me with.  Oftentimes people come out ahead with your risk… 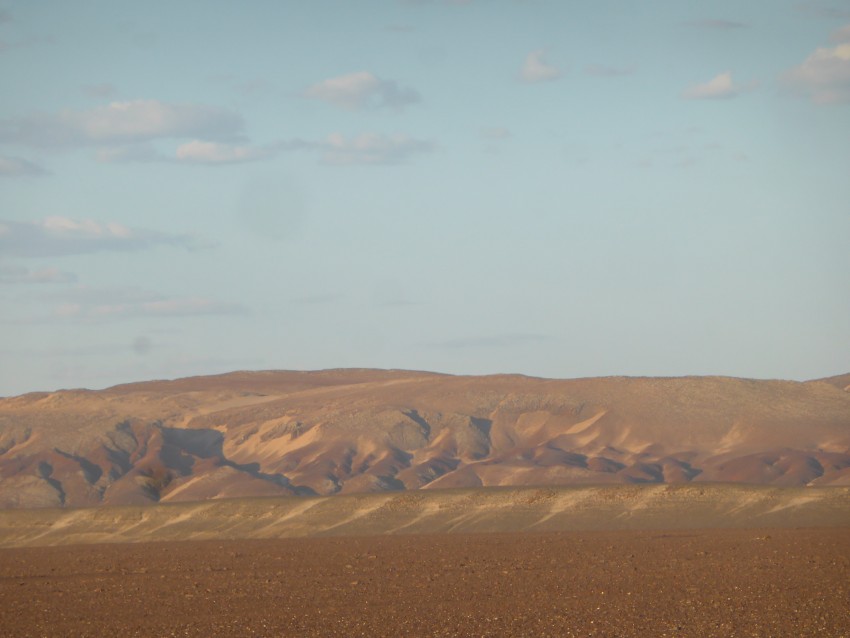 The colors of the land…

So, I had two choices: keep on keeping on with no extra spare, or drive back 10 kilometers to a turnoff that would give me a 50 kilometer gravel east-exit from the park.  I took the smart way, and the conservative way, and the wussy way.  It was just too dangerous to drive on those sharp stones for another 50 km to Terrace Bay and back again and then out of the park again.  If I had any trouble up there…it was going to be a long ways just to find a new tire.  I was already a risk just to get out of the park with nothing to spare.  Plus, the spare was somewhere between ‘bald’ and ‘sucks’. 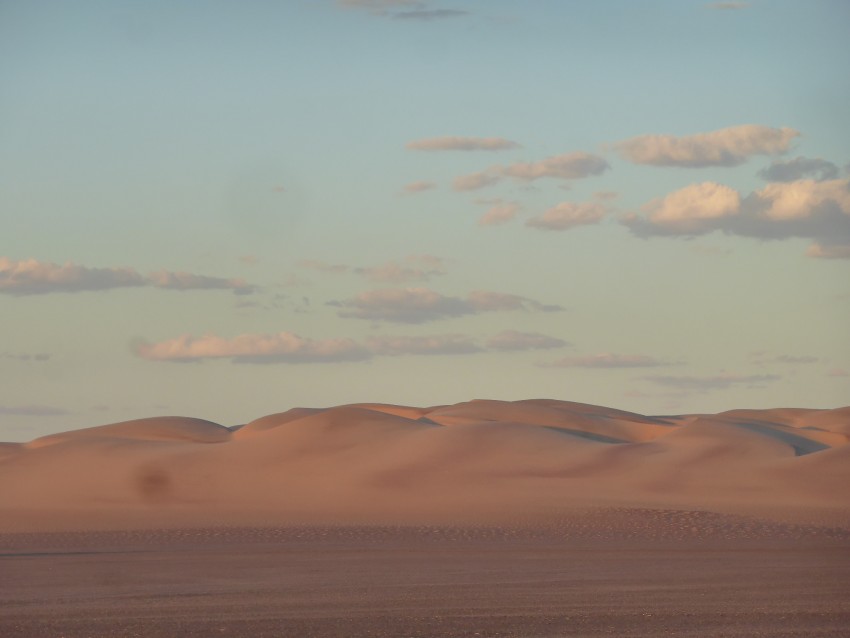 I drove for 60 km on gravel just to get to the edge of Skeleton Coast Park at Springbokwasser Gate.  At 18:55, the girl who was supposed to close the gate at 19:00 was gone.  A police officer who was un-uniformed got in my car with me to go and find the gate-control-girl.  They released me.  Before I left, I asked them where I should go for a tire.  They told me that 93 kilometers down the gravel is Palmweg that has a tire shop and a fuel station.  I told them I would be back in the morning.

I drove through the night on really bad gravel roads with sharp dips that often bottomed the Polo out which made scraping noises, that I assumed it had not made many times before it encountered me.  Eventually I arrived at Palmweg in the blackness of 21:00.  Actually, I arrived 500 meters from Palmweg at an ‘Animal Disease Control Check-Point’ where a woman took the license plate of my car.  I asked her if there was a place I could just pull over and sleep.  She told me to park beside their building, so I pulled into the darkness.  I got into the back seat of the car, took off everything but my underwear and went to sleep in relative discontent… 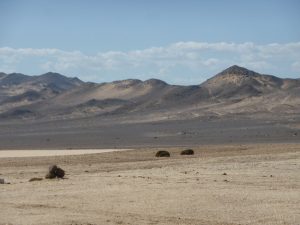 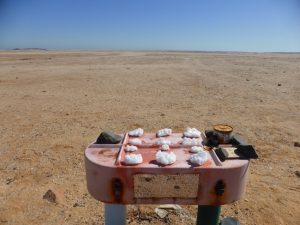 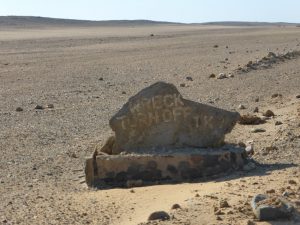 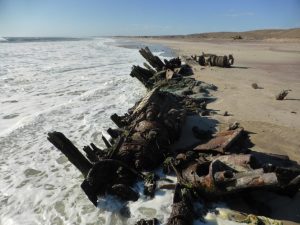 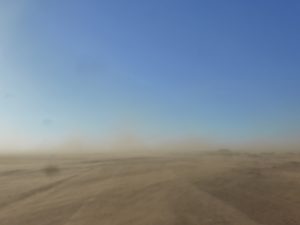 Skeleton Coast sandstorm across the road. 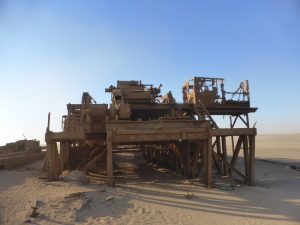 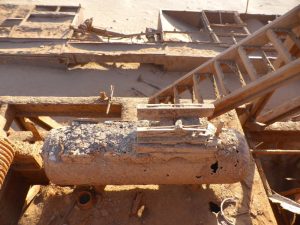 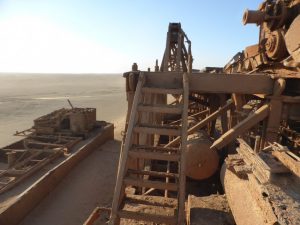 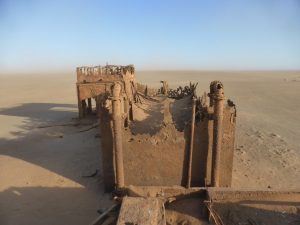 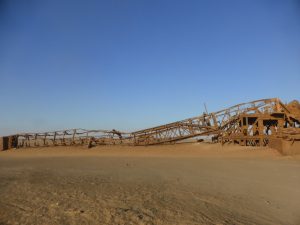 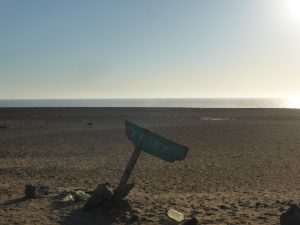 I love how everything is weather worn here. 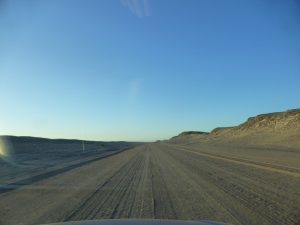 A good part of the road. 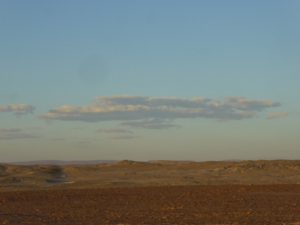 “It is a good thing that Metallica decided to suck and wanted to become mainstream in 1991.  If it had not been for that, I would have not have had so much exposure to them, and I would not have gone through their back catalog and I would not know just how incredible they were and I would only know them about as well as I know Pantera today, which is hardly at all, and that is not good enough.  So Metallica, thanks for going through a suck so that I could be exposed to how much you rocked.”
— Self Realization
[View All]