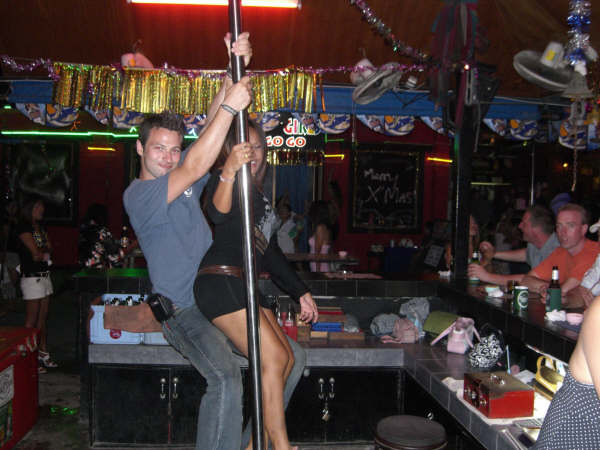 Well, my buddy Mike and I made it to Phuket, Thailand. It was evening when we arrived and decided to voyage out into the street to see some of the life. We were walking along the crowded street, having fun drinking beer and looking at the ridiculous amount of hookers dancing on outdoor tables in the nightlife center of the island. Suddenly we were approached by a man on the street with a flyer advertising a ‘ping-pong’ show. We had been approached about this a couple of times before and finally it was the right night for us. Mike tried to act like he was not pumped up about the show, but he seemed to be a little too curious to really not want to attend. I was ecstatic about the possibilities ping-pong balls and vaginas at a Thailand sex show.

The Thai man we meet tells us that there are two bars that have ping-pong shows taking place. We follow him through the door of a bar and then proceed through the full length red velvet curtains that line the interior walls of the entire establishment. We have a quick glance but leave again before we can see any stage show, as the bar is packed full of other curious men and women. We enter the bar next door, and that is where we get our first glimpse of the bizarre and the completely ridiculous….

Well, we walk in, and there are about 6 girls dancing on the stage, where poles are strategically placed. Some girls are very attractive. I notice that one of the dancers has a jar of water in her hands. She dances a little longer and all of a sudden she squats over the jar and pees out 5 or 6 tadpoles into the jar that immediately begin swimming. Wowee. I ask our guide who brought us there where the best show is and he tells us that it is at the bar next door so we go back to the first bar we had originally walked into.

We enter and the Thailand sex show is ending and chairs in the front row open up as the previous audience leaves. Before the next show can begin, and after convincing Mike that the center of pervert row is certainly the best place to sit, we move up to the stools directly in front of the stage. I can feel a crazy dirty sensation that I have probably not fully re-encountered since I lost my virginity at sixteen, or since the time I stumbled across my older brother’s sloppily misplaced Hustler magazine when I was eight years old.

There are four Thai women who come out on the stage. Two are cute and two of them are somewhere in their 40ish and have seen better days. I think one of them may actually be missing some of her bottom teeth. In a very hoarse voice, one belts out “No Picture, No V.D.O. and No Phone!” We sit there and suddenly one of the girls on stage reaches into her vagina and grabs a string and starts pulling it out. So that is how they are going to start the show! The string is about 6 feet long in total and has about 15-20 needles threaded through the string. Weird. Seemingly harmless.

Then one of the girls gets a guy to come up on stage and makes him stand with a balloon between his legs. Then she gets on her back with her crotch towards him, takes a hollow tube and slides a dart into it, and then takes the tube and slides that into her. Somehow, this woman sucks air into her vagina, and when she shoots the air out again, the dart shoots about 4-6 feet and pops the balloon between the guy’s legs. Impressive.

After, the same woman sticks a whistle in herself while she is standing up, and is able to suck in and blow the whistle. She must have blown the whistle 30 times by walking around and cocking her hips. I nearly fall out of my chair while laughing so hard. A vagina and a whistle … I mean, come on! Who ever thought to put those two things together?

Then the other rough looking lady, with what seems to be a heavy a case of laryngitis, pulls on a string and pulls at least 20-30 yards of yarn out of herself, and by ‘herself‘ I mean out of her vagina. Then she offers for any of us to touch the yarn, which we all politely decline to do.

Next she tapes three cigarettes together and puts them in herself and lights them all at once. When she sucks on those cigarettes and the cherry embers glow like crazy, then she can actually puff the smoke out of herself. She can actually smoke and puff with her vagina. Unreal. Mike makes a comment about how she has found a way to avoid lung cancer. She shoots some ping pong balls into a glass, and finishes the show by inserting a blue marker into herself and with her hands on her hips, she squats over a blank piece of paper and writes, “See You Again” in very fast and very legible hand writing. Fucking wowzers. Thailand…

“I am becoming a lot more lousy on days after partying. My hangovers are not getting worse, but I am losing the ability to sleep in. Aging is a headache....”
— Learning about Life
[View All]