Mexicable Cable Car in Mexico City
Jan 18.
After Irmante finished her studies at lunch time, she skipped her afternoon Spanish class so that she we could hang out.  We caught the metro to the end of Line 3 to Verdes Indio.  From there we caught the free Mexicable Bus for 20 minutes through Mexico City traffic to the start of the Mexicable system. 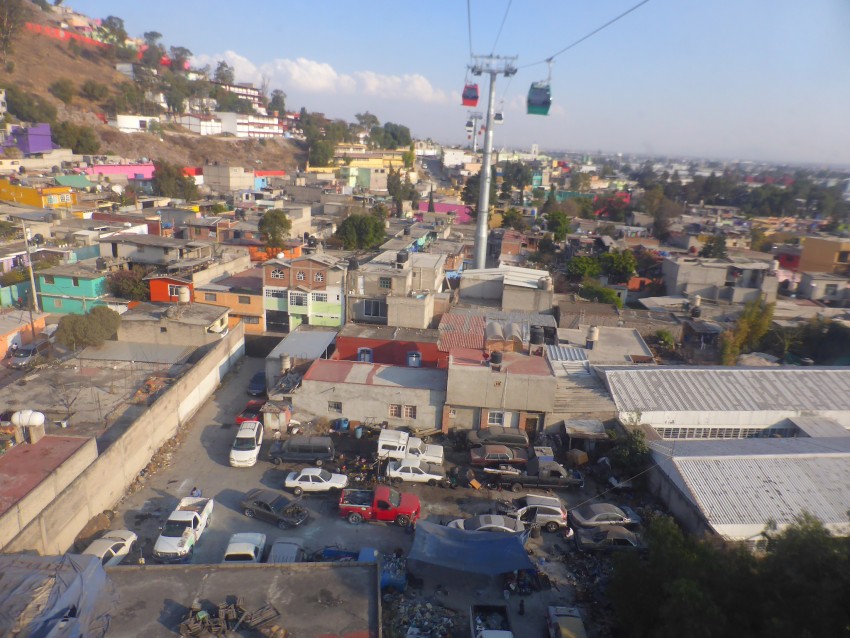 The gondolas of the Mexicable system.

Mexicable is cable-car gondola transportation that just opened in October 2016, and runs over the some of the poorest slums/favelas of Mexico City as public transport to get locals to and from the city. 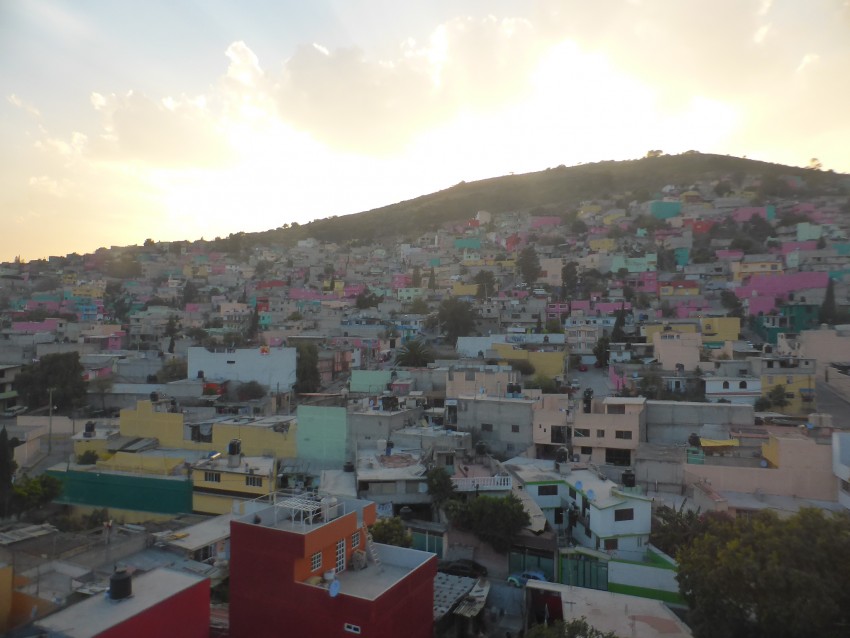 The Mexicable itself is nothing like anything else mechanical in Mexico.

Mexicable shines.  It is fresh.  It glistens.  It is beautiful.  And it has a really cool name.

Security guards control the whole system and each metro system is a work of art, literally.  Graffiti artists from Mexico, Argentina, Canada, United States, and Colombia where hired to paint gorgeous murals on the buildings below to be seen for the duration of the trip.  Besides typical murals on the sides of buildings, rooftop graffiti sits directly below.  Everyone seems to have wanted a part of the beautification action. 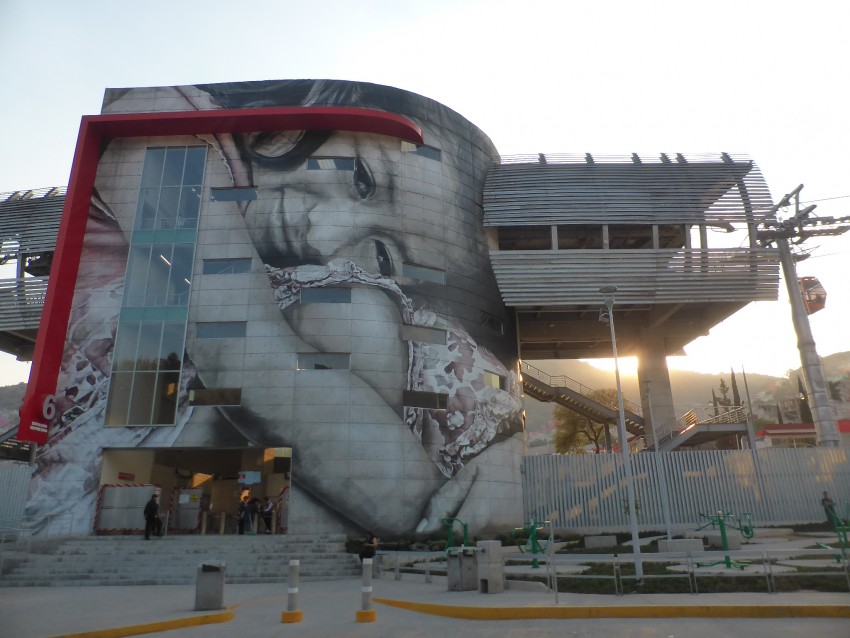 Station 6 art. The entire building is a mural.

The highlight of the ride, above and beyond being able to see into in districts of life themselves, are the people who share the gondola with you.
Riding the Mexicable is an incredibly friendly affair.  Mexicans are warm people, certainly some of the warmest in existence on this planet…but the people on the gondola metro system treat the journey as a social event.  Everyone who gets into the gondolas at each stop enter the car by greeting everyone already seated inside.  The workers helping to load and unload people from the gondolas at the stations along the way ALL had a conversation with Irmante and I about how we were enjoying the ride. 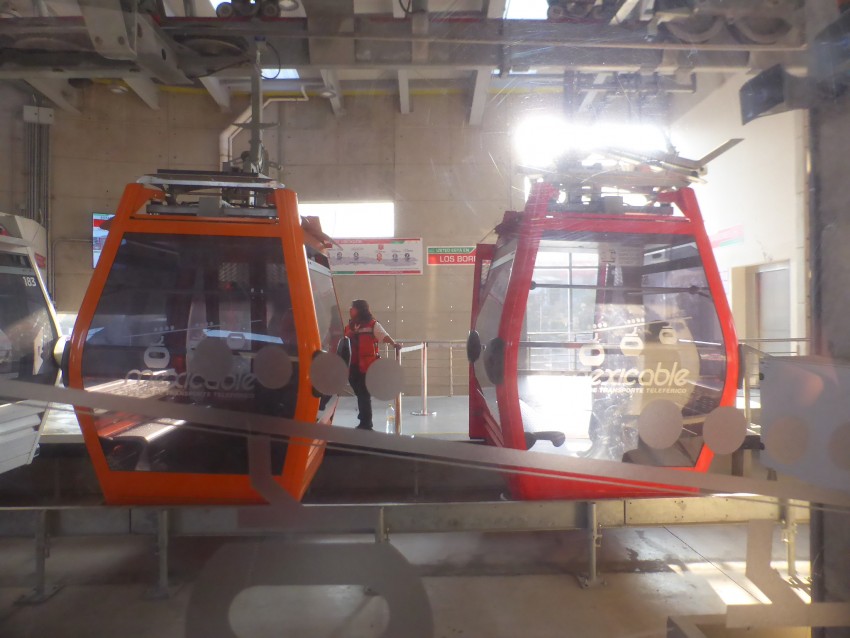 Inside one of the Mexicable stations.

One of the riders in the gondola with us told us about the greatest part of the ride: the safety.  Before the pristine Mexicable opening in October, buses and vans were used to transport workers from their homes on the mountain into Mexico City.  These buses and vans were often subject to robberies and hijackings.  The robberies are no longer an issue with those who use the Mexicable, which transports 18,000 people each day.  Although the monstrosity of Mexico City’s population never seems to end, a fellow gondola passenger told us that the Mexicable system is actually in the state of Mexico rather than a part of Mexico City itself.  Without being shown, it is impossible to locate the line that separates the two as the housing just carries on and on. 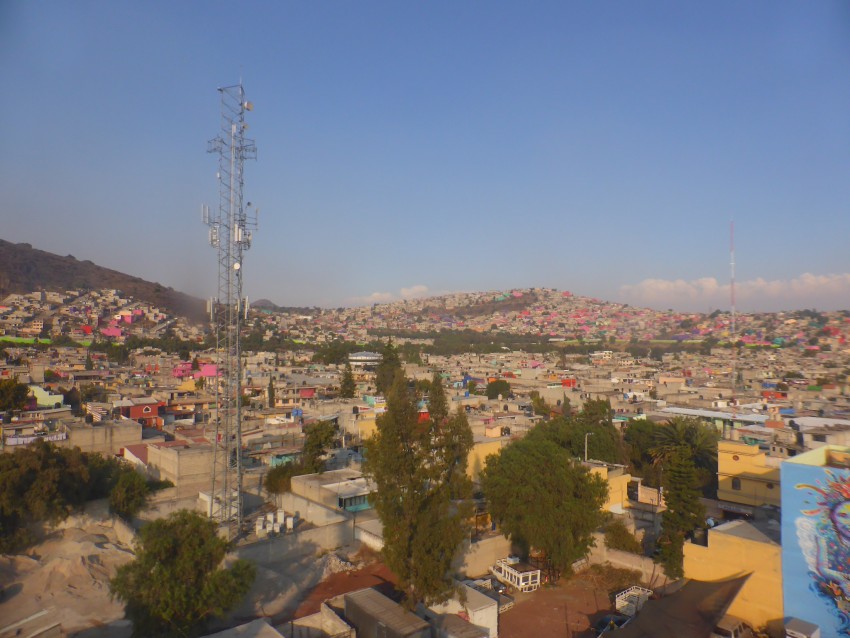 Mexico City and the State of Mexico. The photo quality is poor because of the smog.

Mexico is so vibrant.

There are sections of the favelas that seem to have color codes.  It is as if someone stipulated, ‘In this area, you will only be allowed to paint your house purple, pink, yellow or turquoise.’  It is incredible.

Football pitches below the Mexicable.

On the way to the top, we asked a young Mexican who works in a hotel in the city where the best stop would be for us to get off.  He looked at our skin and said, “It is better if you do not get off.”  He did not want any chance of harm to come to us.  Our friend departed at Station 5 and we carried on to the top at Station 7 where we got off the Mexicable system against his prior judgment.  I guessed that no one was going to approach us and stab us in broad daylight. 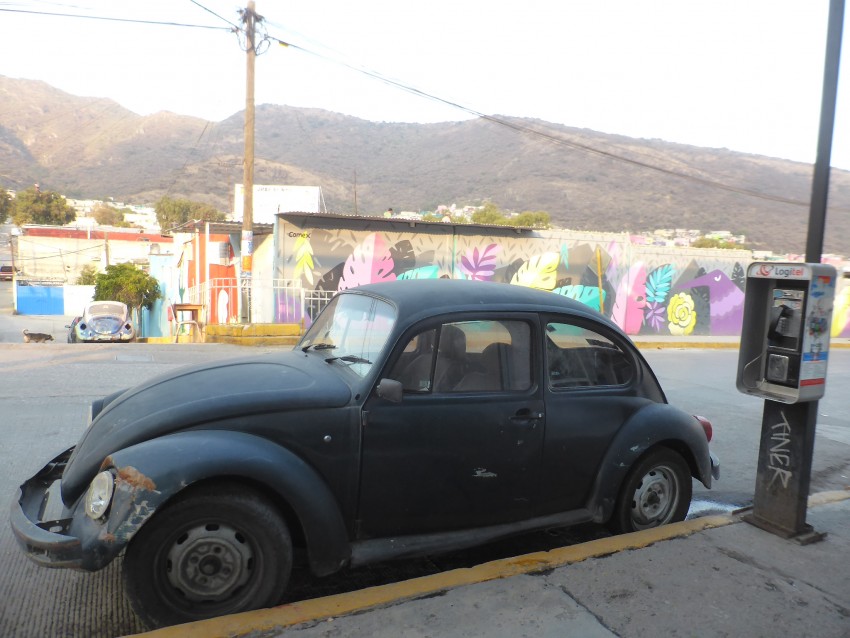 The Mexican’s love their VW Bugs! Love them. You can hardly take a photo of one without capturing a second in the frame. There are everywhere.

We walked down the main street all the way back down to Station 5.  The streets were actually very calm and quiet with very little traffic on them.  At Station 5 we turned around and walked back up to Station 6 where we got back on the Mexicable and rode it to the top again, stayed on, and rode it back down the entire length to the bottom again.

Mexicable is a great experience and it is something that you need to do should you ever visit Mexico City. 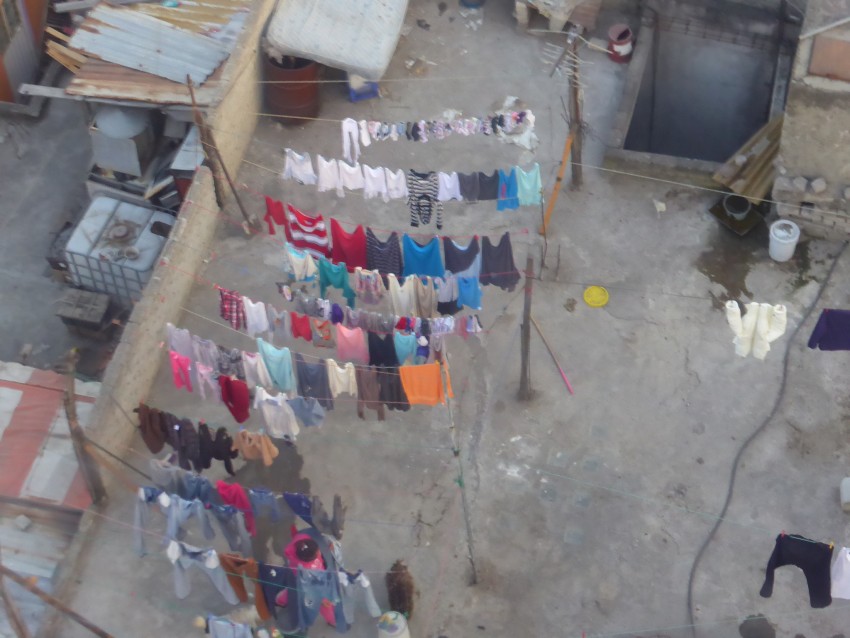 Laundry day with kids and dogs.

Even if you do not care for heights or sights, the warmth of the locals sharing the ride with you will be certain to make the ride a pleasurable experience.  And if you never get off the Mexicable, the entire 34 minute journey to look down into: the lives of the locals, the mechanics fixing cars, the cemetery, the blockade yards full of collected iron, the ladies hanging laundry, the dog on rooftops…will cost you all of 30 cents to view from above. 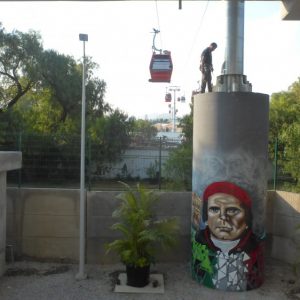 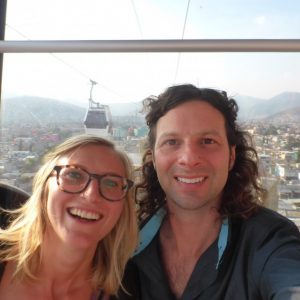 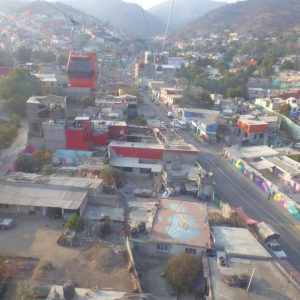 The sides of the street below, covered in graffiti. 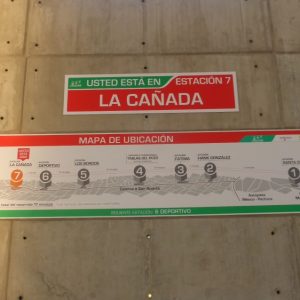 Station 7 of Mexicable. I asked what La Cañada means. It turns out that it is just a word. 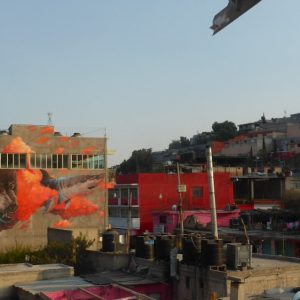 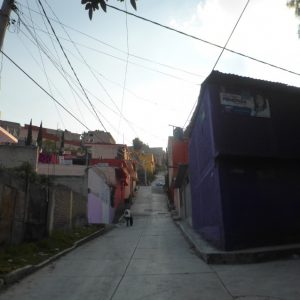 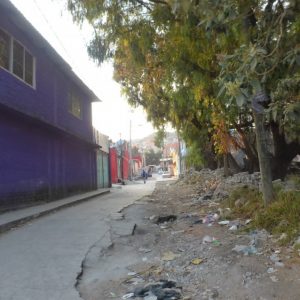 Walking through the districts of the Mexicable neighborhoods. 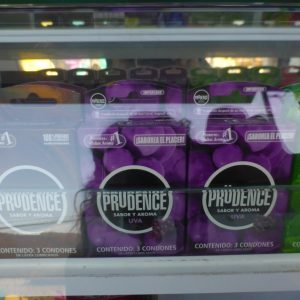 That is an amazing name for a condom brand. Prudence for the prudes! Hysterical name! 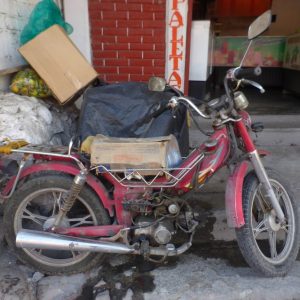 The owner of this bike liked how much I liked his motorcycle seat. 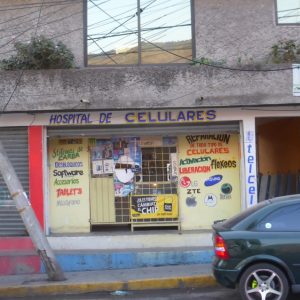 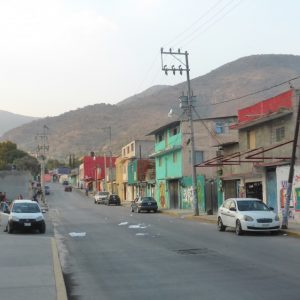 Quiet streets deep inside of the favelas/slums.

Amazing! You often have to pay to use the toilet in Mexico. Instead of coins, you can just use your Mexicable card in the stations. 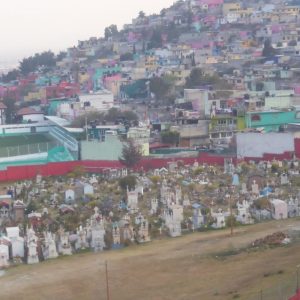 Cemeteries are always fascinating to look at in other cultures. 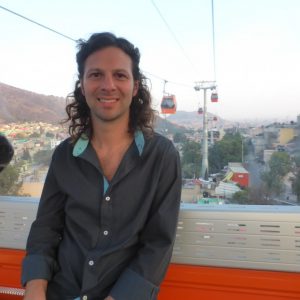 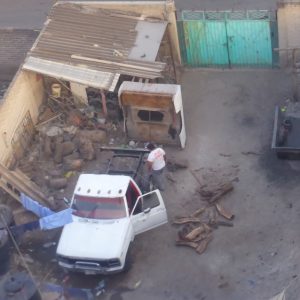 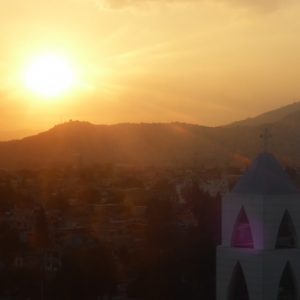 Sunset over Mexico City from a Mexicable gondola.

“Me - "How has your relationship been?" Friend - "I like her.  But I always feel like the guy left out when my friends talk about how much they hate their old ladies...so that sucks..."”
— A Friend From Home
[View All]