At 8am, I went to get on my boat to Isla Floreana and I was told that it was cancelled because there were not enough people on it to make the trip.  That was after the morning boat to San Cristóbal had already left.  So, I hung out at the fish market for about an hour to watch the fiasco taking place with the sea lions, pelicans and humans.  The humans were cutting up the fish and the two sea lions out for hand-outs were like tame dogs, standing alongside the humans with their noses centimeters from the cutting knives as they looked up at the cutting boards.

There were at least 15 pelicans, and they were everywhere, including on the sea lions backs and on the counters as well standing on the fish that had been cut and the fish that were to be cut, waiting for gifts of fish that are considered un-edible to humans.  When a fragment was tossed aside, it was a mad scramble of pelican and sea lion mouths for the bits of fish.  The winner was happy only momentarily as growing stomachs provoked more greed.  The sea lions would bark and howl for fish pieces and had to be chased away from time to time as they were becoming a space crowding nuisance to the cutting fishermen.  It was hysterical.  The pelicans would get pieces of fish so big that they would try to fly away with them in their mouths and could not get high enough off the docks with the extra weight and they heavily flapping wings would let them down, and they would fall into the water below.  This place is amazing.  The Galapagos is a constant zoo of wild animals entertaining at all times.

I bought a $30 boat taxi ticket to from Isla Santa Cruz to Isla San Cristóbal.  At the docks when the Galapagos officials wanted to check my bags to see if I had anything organic from the island that I would take from Isla Santa Cruz to Isla San Cristóbal.  The girl asked me, “No food no drug?”  I was surprised by the question and I asked her to repeat herself to make sure I heard her right.  She pointed inside my bag and questioned “No food no drug?”  What a question.  I told her, “Yea, this backpack is full of cocaine.”  The guy beside me thought I was funny.  The girl official did not really listen to me to care.

I hung out with very cool Joselien from The Netherlands and her friends from her volunteer program based here on Isla San Cristóbal.  They pay about $150/week to do volunteer work here on this island, and their work seems to be what my family has to pay a wage for someone to do on the farm at home.  Somehow, someone on this island has figured out how to get someone to pay to do general labour work for them.  My family should try and figure out how to do that in Big Beaver; ‘The Real Canadian Farm Experience’ where you get to pick rocks from the fields and clean up junk around our farmyards, all for the low price of $120/week, plus meals which you have to provide yourself.  It is a crazy system.  One of the guys told me tonight that he spend the day digging a hole with a spade and then he spent the rest of the day moving a cow.  That sounds familiar….

I came back to the hostel around 11pm when my new friends headed home to get a good rest to be able to pay to work in the morning.  On the way, I heard noise that sounded like sheep coming from the docks, and it turned out that there were hundreds and hundreds of sea lions sleeping on the docks, beach, sidewalks, shores, rocks, and any other flat surface available for an evening rest so that they are able to play all day tomorrow.  The sea lions are like little humans though, making sheep sounds as they try to sleep as a massive group.  There is always someone who can not sleep that is awake, moving around and making noise, incidentally waking the others until an alpha-male wakes up, looks around,  and yells at the one moving around to silence him.  It is funny.  The young ones make a lot of noise as they nurse their sleeping mothers and others seem to be having nightmares in their sleep where their body flinches and tremors though the night.  It is an amazing to watch these animals… 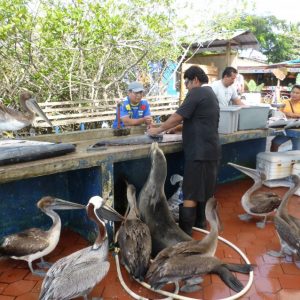 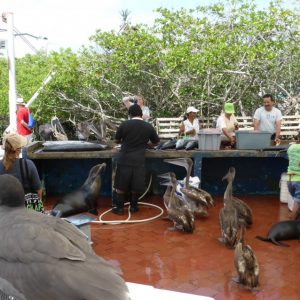 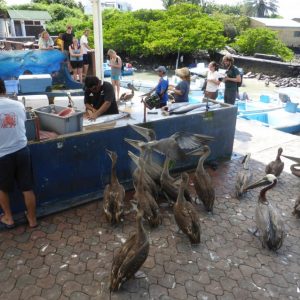 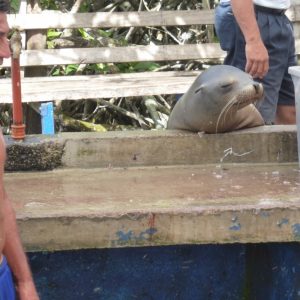 “Hmm, I wonder what they have in this bar…?” 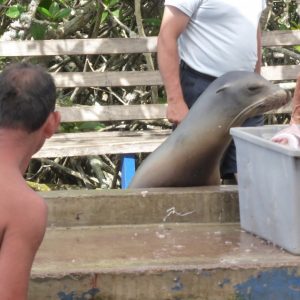 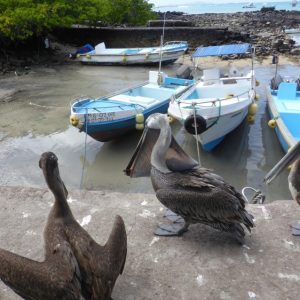 The pelican who stole an entire fish. 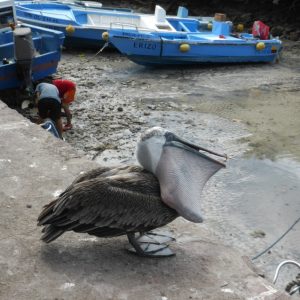 That is an entire fish in its face. No wonder babies come from storks and pelicans. Look at the room they have for carrying them. 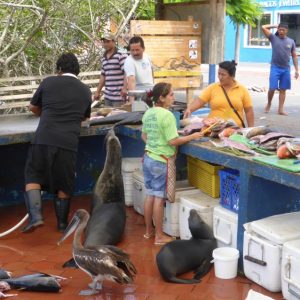 The natural zoo of the Galapagos. 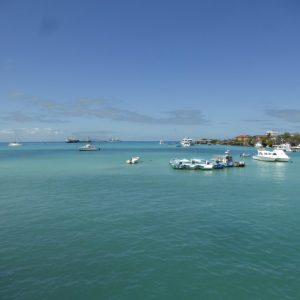 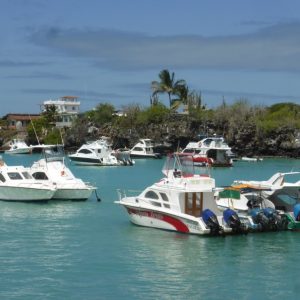 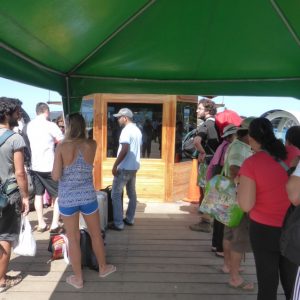 The quarantine line-up to get off the island where our bags are searched for organics. 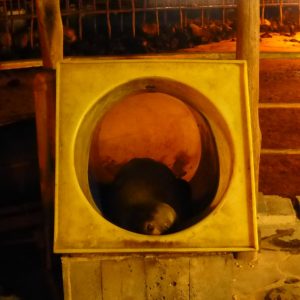 A sea lion sleeping in a children’s slide. 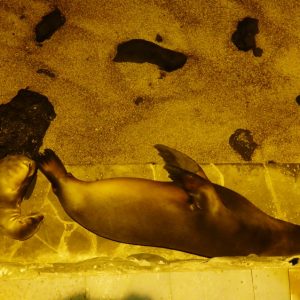 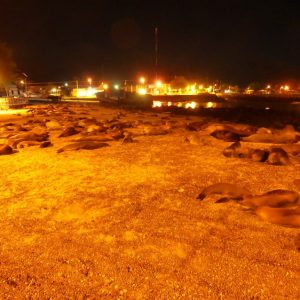 Hundreds of sea lions, sleeping the night away on the shores. 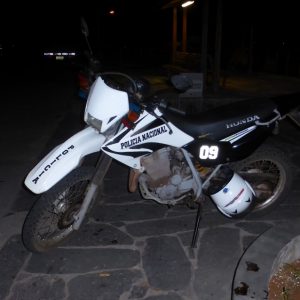 “(Said with an Irish accent) We used to call the catholic school, ‘The Virgin Megastore.’”
— Ian
[View All]