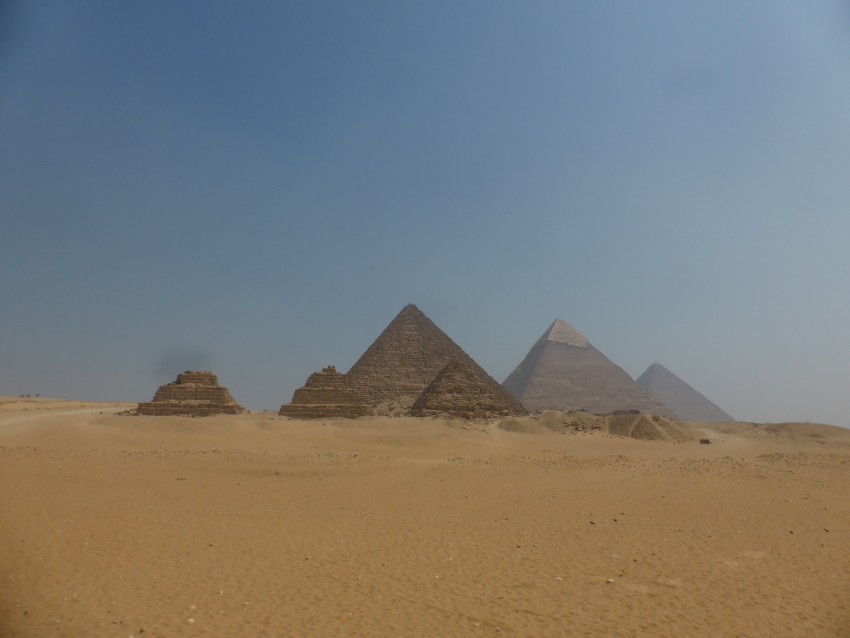 Egypt! It is real!

I awoke in Athens, Greece, just before my alarm at 08:30. I wanted more sleep, but I always want that.

Sex, sleep and money…there is just never seems to be enough!

My friend Menia was already up and making breakfast! Awesome! I had a shower and met her sister who refers to me as ‘Pfshh Too Soo!,’ a Greek expression said aggressively meaning ‘I spit on you.’ Menia taught that to me. It made her laugh so much when I would say it that she made a video of me saying it so that it could cheer her up when she is not happy. She showed the video it to her sister and now her sister refers to me as that…’Pfshh Too Soo!’

As I was eating breakfast, Menia put on a concert with her cello for her sister and I before I had to rush off to catch the metro to the airport… A cello is a soulful instrument. Those deep notes… Uhh!

I had to get to the airport early as the airliner did not send me a confirmation email for the flight today that I bought last night, so I was not sure if I was going to be able to get on the plane or not. But, once I arrived there were no issues! Stamped out of beloved and awesome Europe…

Wait a minute, there seems to be something missing from the story…
Okay, well it is like this: Last night I was trying to find a flight from Athens to Asia, semi-specifically, Bangkok, to meet my friend Markus. I found the required flight from Athens to Bangkok leaving the following day (today) for £340 ($438) and the flight had a nine-hour layover in Cairo, Egypt. That put a ton of ideas in my mind. I waited on the Athens flight to Egypt to Thailand for about an hour while I had a souvlaki to think about it. The flight was 100 pounds more than I wanted to spend to get to Asia, but that was essentially £100 to go to Cairo and see the pyramids. A no brainer, right? I was in such a good mood as I went to book the flight to Egypt to Thailand and it then disappeared on me as I went to upload my passenger information, saying ‘this flight is no longer available.’ I was super bummed out over that. So, I had to totally regroup and I ended up making things way better for myself by booking a flight to Egypt from Athens in afternoon for £148 ($190), and then 36 hours later, another flight from Cairo to Bangkok for £201 ($259) with a short layover in Abu Dhabi. That means it cost me £9 extra to get 36 un-rushed hours in Egypt. Freaking amazing! I worked hard and did a lot of research for about two hours put it all that together for the flight to Egypt to Thailand, but I ended up with a fantastic situation and essentially a free vacation to see the Pyramids at a £9 ($11) cost!

I wrote in my journal on the plane and all of a sudden we were descending into Cairo on the flight to Egypt.

The view… Cairo is the largest city in the middle east with 20.5 million people. It is size-y. The city is a sandstone colored supremely massive urban sprawl. ‘Oh, hey, there are the pyramids right over there that you see from the airplane as you come in… Wowzers!’ As the plane gets closer to the ground, the only thing in that is not sand coloured are the vibrant looking red, green, silver cars on the streets and the occasional dotted blue swimming pool. Cairo is humongous!

Cairo is the largest city in the middle east with 20.5 million people. The city is a sandstone colored supremely massively humongous urban sprawl.

It cost $25 in green US cash to get a 45-day visa for Egypt.
The visa was a half page sticker visa that I paid for at some ‘Bank’ counter in the airport. The guy did not enter any information into anything. I gave him $25 and he just handed me a sticker in the same nonchalant manner that I like to hand people Beaver stickers after I think they are cool. But this was a government acceptance sticker. Kind of a bigger deal, but with the same, ‘Oh by the way, here have this…’ I gave my passport and sticker to a man at passport control and he peeled off the back of the sticker and put it upside-down in my passport. Thanks pal. I had been going for the ‘sexy-passport-pages’ appeal with fancy visas, rather than the ‘Did-a-five-year-old-put-this-sticker-in-here?’ look:

‘You might be the worst sticker sticker guy ever, passport control man!’

As I was collecting my bag at the belt, a guy who was about my age with an accent like mine overheard me speaking and struck up a conversation with me. He said he loves Egypt and he has been here five times now. He asked how long I would be here. I told him about 36 hours. He said to me, “Oh, if you only have 36 hours here you should go and see the pyramids.” I looked at him directly in the eyes. I was a dry as I could possibly be, without even a hint of sarcasm when I replied. My response was pure dryness as I said, “Uuuuh…yeaaaah… I was just gonna sleep in the hostel for the next 36 hours… Yeah, that’s a good idea… …I should go to the pyramids… Yeah. Thanks…umm…for that suggestion…” And I just looked at him blankly. I did not even crack a smile. It was sort of fun. I left him to try to determine for himself if I am the biggest moron alive that I had not even thought about the pyramids here, or if he had probably just said the dumbest thing that any person in the world has said to anyone on the planet in the past 15 years. ‘The pyramids in Egypt you say…’

I made a deal with a taxi driver for £100 Egyptian pounds ($5.55), to drive me 30 minutes into town… When I called the hostel earlier to see what the price should be to get from the airport to their establishment, they told me that it would cost 150 to 180 Egyptian pounds. I drive a hard bargain.

I am starting to develop a thing for lions on bridges…

The Egyptians do not use a numeral system that I (and probably you) use. It is totally different. Arabic countries do it differently. Yeah!…I know!! I had no freaking idea either. It is strange to see. I have been to 92 countries, and I have never seen anything like it anywhere. Here is my cabbie’s phone number. Yeah, I could never call him:

It is bizarre to go and look at the metro and the last stop on the line is Giza. GIZA! It is here. I am here where that giant pyramid is located. I could actually take the metro to it. I am going to see the pyramids and the Sphynx at Giza tomorrow. What in the heck?!… Just because I found a flight last night and flew here today, I will touch the pyramids. I am here…! I can not really believe it.

Dear Hustlers in developing countries, It is a shame that I must look like a fresh face to you. But unfortunately for your future funding, I have been through this game before. You ruin it for everyone and turn me into stern-faced prick, suspicious of every other person who attempts to have a conversation with me on the street. I am a pretty good guy, with a lot to share, but you make me a fairly shitty person. Everyone loses because of you.
Sincerely,
Big Beaver Diaries’ Jerk-Face Alter Ego.

I walked along the Nile and people hassled me to get into my pockets. Then I came back to the hostel and had to hurry to get ready as I had agreed to go on a river-dinner cruise. When the receptionist in the hostel was offering me that as an option for dinner tonight, I said that it sounded way too tacky for me, and that I was bound to hate it.

The receptionist told me that because Ramadan is taking place right now, it might be hard for me to find entertainment this evening.

I figured that since I have such a short amount of time here, I might as well just do the mega-touristy things. Well, I knew it, and the river-dinner cruise was a mistake. But, at least it was not worse than I had expected, so that was a bonus to enjoy.  Or maybe they are all the same.  I was bored out of my mind on the the touristy cruise.

The other problem was that I went on Tinder at the hostel three minutes before I was supposed to go on the cruise and I did not have time to have a good look around, so I swiped ‘Yes’ to about 30 girls in a row without looking at their profiles. I figured that with a hurried move like that, I could just let possible matches happen and sort through the mess later to decide who was actually matchable at that point. Then I had to run off after I had stirred the pot.

I got on the boat and then about an hour later I found Wifi for about 10 minutes and my phone blew up! It turns out that I am a Tinder superstar here in Cairo. I even got invited to a party which I wish I would have been able to sort out earlier… Instead I was on the lamest river cruise in the grand collection of lame river cruises.

“The guy running the bus sat to chat with me.  He was talking about a camping trip he takes care of and told me, “You can cook or we can cook you.”  I told him it did not sound like a good time unless he had missed the word “for”.”
— Life in Kenya
[View All]